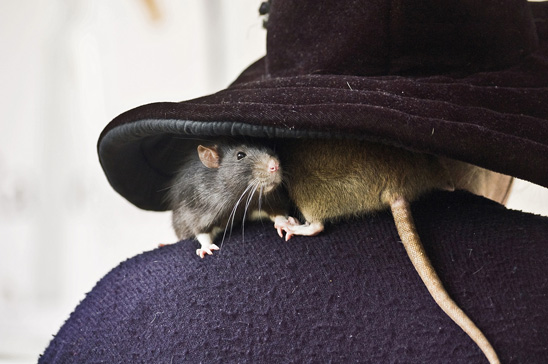 Camella the rat familiar perched upon the highest shelf of Witch’s cottage and stared down at the spy. Warlocks and wizards sent spies into the cottage to steal Witch’s powerful charms. But this wasn’t like any spy Camella had ever seen, not like the mechanical gnomes and flame sprites that warlocks and wizards preferred. The spy was a little ball of dark fuzz drifting between bits of clutter on the floor. Unlike the other spies, the bees not had not seen it.

Camella looked to the hive built into the far windowsill, hoping for a signal. The yellow and black workers were bringing in the last harvest of autumn. They buzzed louder and zoomed faster around the hive than normal, agitated, but they sent her no message. The spy drifted closer to Witch, an unwelcome black speck.

“Witch, Witch!” Camella said. She stuck her tail out behind her. “I found a spy!”

“Busy!” Witch said. Wrapped in a black hat and shawl, she sat in her chair, her needle rising and falling. She had eyes only for the cloth and thread.

Camella squeaked to herself. She always did all the real work around the cottage. Fine then. She leapt off the shelf. In midair, she unfolded the fine wings pressed to her back. They caught the air and guided her down. Camella had met rats without wings, rats that did not have witches. That was sad – every rat should have a witch.

The hardwood floor met Camella’s claws. The spy darted away. Camella leapt. Her jaws closed on the wriggling bit of gray dust. It tasted bitter, like old clothes left out too long in the damp. Camella swallowed it. The bitter damp slid down her throat, and her guts roiled. She’d eaten many strange things, but this made her want to throw it back up.

Camella hunkered down; a little sleep would settle her belly. A flicker of movement caught her eye. Camella turned her head for a better look. More gray specks flitted beneath the dressers and wardrobe. How could so many have snuck inside the cottage? Camella couldn’t eat another one. She needed Witch’s help.

Grasping the thick shawl, Camella scampered up Witch’s chair leg and clamored onto Witch’s shoulder. Camella chirped into Witch’s ear, “Witch! Witch, I ate a spy. ” Camella knew other humans called Witch something other than Witch, but that was silly. She was Witch.

Witch reached over and scratched Camella just under her jaw bone. “That’s my Ella-Ella,” she said. Witch’s other hand still drove the needle in and out of her work.

Camella relaxed into the scratching. So nice, she could stay here forever. No, she couldn’t. “But there are more spies!” she said. “I ate a spy, but I’m full now, and there are more.”

Camella backed out of range of the treacherous scratching. She jumped up onto the brim of Witch’s hat and hung down in front of Witch’s face. That always got her attention. “I told you I can’t eat more spies,” Camella said.

Witch’s free hand grasped Camella and lifted her down to the floor. “Busy!” Witch said.

Camella squeaked. Fine, Witch was busy. Camella would just have to deal with the other spies, even if she was full. She shivered. Oh dear. The cottage was cold; Witch hated the cold.

Camella folded her wings. The spies would have to wait until she checked the heating charms. She scampered to one of the many chests that lined the wall and pulled herself up. At the top, she found one of the three charms. Old bits of furnace iron were strung together with thread and wire. Camella pressed a paw to one bit of iron. Cold. She tried another. Cold. Camella chittered. She knew how to heat it up again. She set her teeth against the iron, ready to bite down.

Buzzing caught her attention. Yellow and black worker bees flew in a cloud above their hive. Too many, even for a large harvest. Autumn was too late for the bees to swarm, as outside the flowers wilted and frost formed on the ground. Camella took her mouth off the charm. “Witch! The bees are swarming.”

Witch mumbled something. Her needle rose and fell.

Fine, Camella would do this bit of work too. She ran and jumped across the cottage’s many shelves until she arrived at the hive: an old cupboard the bees had turned into a home. More bees swarmed outside the entrance.

The swarm turned as one. Thousands of eyes stared down on Camella. “We must go,” countless voices buzzed.

The rat familiar stood up on her hind legs. She flared her wings. Now that she was tall, the bees would have to listen. “You can’t go outside, it’s too cold. You’ll drop down dead.”

“We will try to find a new home,” the bees said. “We may fail, but we cannot stay here. She approaches.”

Camella twisted her whiskers. “Who?”

“The Witch’s enemy. The hive has seen her before. The Witch cannot withstand her. The Witch will not survive her this time.”

“Witch’s enemies are silly,” Camella said. “They’ll run away when we bite and sting them.”

“Witch is old, familiar. She knew this enemy long before she kept you.”

Camella snapped at the nearest bee with her teeth. Her tail lashed back and forth. “Witch protects you, gives you a home. If this enemy is strong, I will still fight them, and you will help me.”

“We cannot,” the bees said. “Fybra approaches. Look.” The swarm formed a new shape, an arrow pointing to Witch’s chair.

Camella looked. Witch hunched in her chair. Her skin was pale, almost white. She stared at nothing. Her hand jerked up and down, but the needle lay discarded on the floor. Camella shrieked. “Witch, I’m coming!”

She dove from the window sill and opened her wings. She came down near Witch’s chair. Floating bits of gray dust emerged from behind table legs and other debris all around her. Camella bared her teeth. The floating bits converged on her. Camella lashed out with tooth and tail. Her muscles turned sluggish and numb where the bits of dust struck her.

Camella rolled, crushing the floating dust beneath her. She fluffed out her fur, catching more dust and squashing it flat against Witch’s chair leg. The last bit of dust crumpled lifeless to the floor. Camella scratched herself, raking feeling back into the numb patches beneath her fur. She squeaked in triumph. Witch.

She scampered up the chair leg. She ran across Witch’s shawl. Witch was unnaturally still. Her chest barely rose and fell with the intake of breath, and her pale skin was cool to the touch.

The rat familiar climbed up to Witch’s shoulder. “Witch!” she said. “I beat all the spies. You’re safe now.” She chirped into Witch’s ear.

Witch would reach over and scratch Camella under her jaw bone, like Witch always did. Witch didn’t move, like she was sleeping with her eyes open.

Camella pressed her body against Witch’s icy cheek. Wake Witch up, she had to-

“There’s nothing you can do, little familiar.”

Camella looked up. A strange human stood beside the chair. She had long hair as white as bone hanging over skin and clothes as gray as ash. Camella scrambled up to Witch’s hat brim. She stood on her hind legs. “You’re Fybra. This is my Witch. You can’t have her.”

Fybra raised a gray eyebrow. “You know my name? Not bad for a familiar. But I have business with your witch, and I will not be put off.”

“Why?” Camella said. She bunched her back legs. “Witch doesn’t hurt you. Go away!”

“But she does hurt me,” Fybra said. “She crafts and builds and makes, when I would have nothing created. My silence and stillness are broken by her magical contraptions.” The gray woman reached out one long arm.

Camella sprang. She opened her wings, angling for Fybra’s face.

Camella tumbled to the floor, one wing bent wrong beneath her. She found her feet and tried to spread her wings for another leap. The bent wing wouldn’t open properly, and it hurt to try.

“Brave,” Fybra said. “But you’re only a familiar. Your witch has all the power, and she’s defenseless against me.”

Camella shook her head to clear it. Her bent wing hurt, and patches of her fur burned from the cold of Fybra’s touch. The gray woman knelt in front of Witch with long fingers reaching out. Witch flinched weakly from the touch, but she didn’t unleash her magic or fight back.

Camella chattered her teeth in distress. Witch was mighty; why wouldn’t she fight? Why wouldn’t she move? Witch let out an exhausted breath under Fybra’s touch, and her eyes closed as if she were slipping into deadly sleep. What could make Witch sleep at a time like this?

Frost crackled on Camella’s whiskers from the cold. Camella twitched her nose to shake off the white crystals, but stopped. Cold. It was freezing in the cottage. At the chill’s center stood Fybra, with hair like snow and skin like a winter cloud. Of course, Fybra could make Witch tired and slow because Fybra was the cold. Witch hated the cold.

Camella raced up the dresser leg. The heating charm lay where she’d left it. She took up the flint in her teeth and bit down, chattering her teeth against the iron. Sparks flew. A red glow spread through the charm.

Fybra’s voice thundered. “What? How?”

Camella set her teeth against another piece of iron. The charm’s glow brightened from cherry red to golden yellow. Heat bathed Camella’s fur.

Fybra’s long fingers reached for Camella. “You’re a familiar, you have no power!”

The rat familiar leaped and ducked away. She lunged in and struck another piece of the charm. “Witch created me! Created me to do all the real work.” The charm glowed white. Camella grasped it in her teeth by a bit of twine and leapt from the dresser.

Camella hit the floor. She tried to rise, but her legs shook too badly. The heating charm lay beside her, its energy spent. Fybra was gone. Only a light coating of gray dust lay where she should have fallen.

Hands reached down for Camella. The rat familiar tried to push herself up and fell. The hands grasped her. Warm, human hands.

“Oh, Camella,” Witch said. “What are you doing in all this dust? And your wing. Come here, my Ella-Ella.” She gathered Camella up into her shawl. “What were you doing while I was napping?”

Camella relaxed into the warm shawl. “I did all the real work!” She chittered in pleasure as Witch scratched her under the chin. With the other hand, Witch made delicate little motions that mended Camella’s damaged wing. The familiar curled up in Witch’s lap. Her work was all done for the day.

Part 4: The Bridge Too Far

Part 3: The Voice Beyond the Bramble

Comments on The Familiar and the Frost