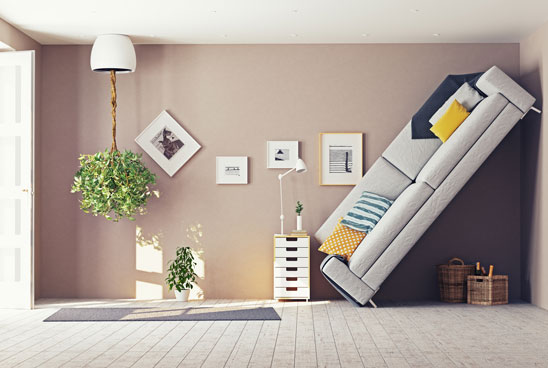 Kelly emerged from the bathroom to discover all the furniture was upside down. Oh god, how could she fix this mess before John got back with his parents? He’d freak. He had planned every aspect of their visit precisely. He specified that the house had to be in perfect order and told her to wear the most conservative dress in her closet. But while she slaved over every eyelash, something had vandalized her careful preparations.

John didn’t believe in goblins. According to him, the twisting tail she’d seen through the bedroom doorway was just a belt. She told him how her pies and cupcakes went missing before every potluck, and he told her she’d imagined making them in the first place. When she was late to dinner after sweeping up her broken plant pots, he shrugged off her explanation as an excuse. After she showed him how all her pictures had been removed from walls and piled neatly in the center of the floor, he asked her to see a mental health specialist. He’d believe her once he saw one, but as MysticMenace.com had explained, goblins were masters of camouflage. That’s why people rarely caught them at their mischief.

Today was the day Kelly would strike back. Thanks to her trusted “conspiracy” website, as John called it, she had a new weapon. Concealed beneath a pile of dirty dresses in the closet, the Mystic Light 4000 waited. The label on the box read: Will reveal and subdue imps, goblins, hobgoblins, pixies, poltergeists, and other malicious and magical creatures. She broke the crisp seal on the package; the Mystic Light was cold and hefty. Kelly bent to put the box back where John wouldn’t see it, but then she stopped. Let him see the box. Let him see the goblins! She’d throw her arms around him as he stuttered his apologies.

Kelly’s phone buzzed from the bedside table. A text from John read: Just around the block, see you in a few.

He was back already? John told her it would take him an hour to pick up his parents. She’d hopped in the shower before he’d left, with her clothes picked out even. Putting on her makeup couldn’t have taken more than ten minutes. She looked at the clock. An hour had passed. Like every other important event, John did exactly what he promised, and she screwed up. If she didn’t catch those goblins fast, this visit would be ruined.

She flipped the power switch on the Mystic Light 4000, which filled the room with an eerie blue glow. Unsurprisingly, there were no goblins in the bedroom. They probably knew what was coming and ran to another room. She went to the office next, but there was nothing there. Nor was there anything in the kitchen, the dining room, the living room, or even the entry. That couldn’t be right. She shined the light on the furniture, under the furniture, along the floors and the walls, and even on the ceiling. No creatures of any kind.

She turned the light off; what a crappy piece of over-hyped junk. John was right. Mystic Industries said all those things because they wanted her money, and she’d been gullible enough to fall for it. Why did she blow everything out of proportion? John and his parents would be here any minute, and she was playing hide-and-seek with an overgrown flashlight. She righted a small set of drawers in the dining room and stuffed the Mystic Light 4000 inside. If John saw it, he’d probably have her committed. She wouldn’t blame him.

Kelly fixed the rest of the furniture as quickly as she could. With an effort, she righted the dining table and the great, lumbering couch. She pulled all the chairs upright, replaced the pillows, and folded the throw blankets. After moving the coffee table, she paused to examine the tragic fate of her cookie platter. It was upside down on top of broken eggshells and rotting vegetables from the compost bag that had been sitting nearby, waiting to be thrown in the bin out front.

Oh no! She needed more time, but she couldn’t answer only to tell them to stay outside. She punched in a text to John: Stall them.

Why? What are you doing?

Nothing. Just cleaning up.

She carefully went through the cookies, salvaging the ones that appeared untouched and throwing the rest in the bag with the spilt compost. She wiped down the floor and moved the compost to the kitchen, where it would be out of sight.

Then she hurried to the front door, checking once in the entry mirror to make sure her makeup hadn’t smudged. It was finally time to meet John’s parents. Oh god, she was going to retch. Breathe. Don’t ask them any nosy questions, she heard John say in her head, just smile and give them compliments. And whatever you do, don’t mention goblins or anything crazy like that. If you feel the urge to talk about magical creatures, just step away and grab the lemonade or something. She could do this. She could look like a normal, traditional girl.

Kelly unlocked the door and opened it. John was waiting on the other side. His brows had that furrow that said he was upset with her but didn’t want to discuss it right now. Once he saw the door open, he took a quick look back at his parents, and leaned in. “What’s taking you so long? They’re starting to wonder about you.”

“It’s okay, really. Really okay.” Kelly assured him with a weak smile. “They can come in now,” she added belatedly.

John stepped through the doorway and motioned his parents in. His mother’s hair was dyed a reasonable shade of light brown; his father was balding slightly. Their woven sweaters almost matched. One after the other, they opened their arms to bestow parental hugs and then removed their shoes and placed them neatly in the shoe rack.

See? Kelly told herself, this isn’t so hard. She took their fall sweaters and carefully hung them in the front closet. Then she turned back toward the entry and spotted the last thing she wanted to see right then. The armchair across the room lay awkwardly on its side, its misplaced cushion revealing a trove of crumbs and wrappers she had no time to fix. She had already righted that one – she was sure of it!

“Oh, I’m sorry!” She hurried to the chair, putting it back on its feet and replacing the cushion. “I was just putting pads on the feet to keep them from scratching the floor.”

John’s parents looked at each other and giggled. “Sorry dear; that was me,” his mother said, a sly smile lighting her face. “John mentioned how your things wandered about, and I just couldn’t help myself.”

“It was you? Oh.” What a relief. “And here I was thinking it was goblins.”

The in-laws stared at her, openmouthed, before exchanging a worried glance. Behind them, John had a look that clearly said what the hell are you doing?

Oh no, they were barely in the door, and she’d already freaked them out. What if they thought she was a mess? What if they pulled John aside and told him he could do better? Panic rose from Kelly’s gut and bubbled up into a frantic laugh. “As though goblins were real!” Maybe they would think it was just a joke. Please, please, believe it’s just a joke.

John smiled rigidly and then emitted an awkward, mechanical laugh. Slowly, his parents joined in.

When the laughter began to die down, Kelly fled into the living room. She smiled and gestured at the vacant couch, worried that if she opened her mouth she’d make things worse. John’s parents sank into the couch obligingly, but once there they exchanged another anxious frown. John crossed his arms and sat stiffly in a chair next to them, the mirth gone from his face.

There had to be a way to turn this around, but what? Well… she still had lemonade. She could pour them lemonade and let John do all the chatting. Maybe that would make his parents feel better. Then he would forgive her for talking about goblins after he explicitly told her not to. She went into the kitchen and grabbed the pitcher she’d prepared from the fridge. At least the fridge wasn’t upside down.

She peeked into the living room for some sign of hope. John’s father was reaching for one of her cookies. That was good; she could buy approval with cookies. Then John put a hand between his father and the plate, shaking his head. He didn’t want them to eat her cookies? What was wrong with her… oh.

Kelly set down the pitcher and pulled the Mystic Light 4000 out of the drawers. She turned toward the living room. “What’s wrong, dear? I thought you liked my cookies.”

“Oh, I thought maybe you’d seen them in the compost. But that can’t be, you weren’t here when the place was a mess. Were you?” She pointed the heavy light straight at them and flipped it on.

John jerked back, squinting into the beam. “What do you think you’re doing?”

“Just cleaning up. You said you wanted the house to be clean.” Kelly held the blue light steady. The three of them cringed into the cushions, even as they sprouted sharp ears, pointy teeth, and restless tails.

Comments on Kelly and the Goblins