This story contains graphic descriptions of injuries caused by violence. 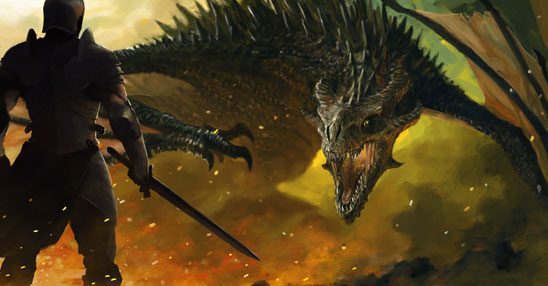 I wake to pain. They came upon me as I slept, the invaders who climb out of their stinking cities to pillage what is most precious. My blood runs hot, and I roar. Three intruders, with swords and staves in hand, are after my treasure, the glow of my life. I will not let them have it, not these pathetic creatures who defile my home.

One pulls a blade free from my left eye, leaving it in agony. I dig my talons into the cave floor. I will make them pay dearly for mutilating me. The first invader is dressed head to toe in steel plates that will crack like eggshells in my jaws. He flaunts the gore of my ruined eye running down his sword. I lunge and rake my claws across him, but he does not fall. Silver runes burst into existence and repulse my attack. They burn my scales, and I flinch away. He is using profane sorcery to make himself mighty.

The steel man stabs his sword through the scales of my arm and into the meat beneath. He twists the blade with a cruel grunt, parting my scales and flesh. The pain is nothing compared to losing an eye, but my arm weakens and slows.

A second invader, this one in soft red robes, raises his hands and speaks in high, screeching syllables. His words send forth a screaming bolt of lightning. It strikes me below one wing, and I convulse as bits of my flesh cook from the inside. The red sorcerer laughs in triumph, urging on his allies as I spasm. Despite his arrogance, he is vulnerable, draped only in cloth with no steel to protect him.

I lash out with my tail, but the third invader steps in and raises a shining silver symbol. My tail hits a solid barrier in midair. Again my scales burn and I recoil. More silver runes hang suspended, a shield I dare not challenge. The third invader holds no weapon, does not throw lightning and thunder against me, but he is the most powerful of the three, his armor emblazoned with the image of a righteous god. Where the others’ faces twist in blood lust, this one smiles, as if he grants merciful favors upon me.

I spread my wings in fear and instinct, but there is nowhere to go. The cave ceiling is low, too low for me to fly, a confining space I would never have chosen if I did not have treasure to protect.

I open my jaws and flame. White hot fire burns forth in a torrent. The invader with his silver symbol again summons a barrier to protect them. My flame washes off it, the runes glinting at me in divine mockery, strong enough to repel even my most powerful weapon. The red-robed man is weaving another spell, and the steel man holds blade high. I can do nothing against them; there is no attack for which they do not have a defense.

They have prepared well for this, boxing me in with nowhere to go. They will take my treasure away in their bloody hands. I must stop them, even if it leaves me dead and broken. In desperation I strike with my tail against the steel man as he comes forward. The blow lands, and he stumbles, but silver runes still keep him from harm. I cannot hurt them, cannot pierce their flesh, not so long as the holy symbol flashes. Yet… I can push them. I know what I must do.

The steel man advances again, his sword red with my blood. I feign weakness, shying away. He falls for my trick and lunges. I lash out with my good arm, striking him hard. Again the silver runes appear, and the blow does not pierce his armor. Instead it drives him back, and he slams into the the other two, sending them all to the ground. The third invader loses his grip on the silver symbol. The glowing runes vanish.

I raise my head and strike. Already they are recovering, but not fast enough. My teeth close over the third invader as he is still grasping for his silver symbol. His armor cuts the inside of my mouth, but that pain is nothing. His blood tastes good. The other invaders cry out in rage, as if it offends their sensibilities that I should kill them for attacking me. The one in red robes raises his hands again and conjures a spray of viscous green acid.

I answer his spell with flame. The cuts within my mouth burn shut. This time there is no barrier. My fire engulfs his red robes. He has no time to scream before there is only charred cloth and blackened bone. I breathe in the charred fumes with satisfaction.

I feel the steel-clad invader scrabbling onto my back, trying to pull himself toward my head. I cannot reach him with my claws, and perhaps he thinks himself safe. I flap my wings and push off as if to fly. There is nowhere to go, and my back smashes into the cave ceiling. I no longer feel anyone climbing my scales.

It takes me some moments to realize that I have won. Those who came to steal my treasure are crushed, burned, or devoured. Fatigue hits me as hard as any invader. The cave floor feels wonderful, just the place to rest. Half my vision is gone, I am bleeding in a dozen places, and the invader’s magic has marred my scales forever. This rest I have earned. Before I lie down to sleep, I turn to check on my treasure. The three red eggs rest unbroken in the back of the cave, their shells reflecting the last glowing embers of my flame.