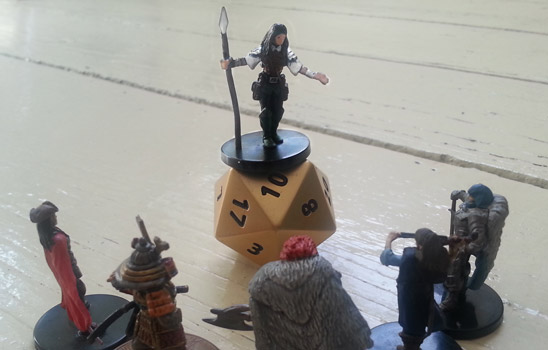 Honestly, this is not a topic I ever expected to discuss. For most of my GMing career, the discussion has been about how to prevent game masters from abusing their power and how to encourage players to be more active participants in this grand bit of collaborative storytelling we call roleplaying.

But in many recent games* the conversation has shifted to whether the GM should be in charge of the story at all. Many games now treat the GM like some necessary evil that should be minimized whenever possible. Sometimes this is done through simple advice, as when Primetime Adventures recommends that the GM play a mostly reactive role after establishing the first scene. Other times, the rules are built into the game, such as when Burning Empires’ scene-management system turns the GM into little more than a player who has to voice the occasional extra.

This trend is usually powered by the idea that if the GM’s role is reduced, the space will be filled by players finally getting to express themselves. Unfortunately, it rarely works out that way.

Whenever games limit the GM’s authority, there’s an unspoken* assumption that the GM is stepping on players’ creativity. The players only need the freedom to stretch their storytelling wings and fly.

Except not every player is capable of or interested in taking an active role in the narrative. They might be inexperienced, have difficulty socializing, or just be tired after a long day at work. It’s the GM’s job to create dazzling plots and dastardly enemies that will help the less active players fully participate.

Less active players need story elements specially crafted to their characters. If PC Jamal is new to roleplaying, they won’t know how to recognize a call to adventure hook. They’ll need something specific, like their character’s long-lost grandniece arriving in search of aid. That’s not something you can count on other players to provide, no matter how empowered they are.

When systems limit the GM’s authority, they risk letting these less active players fall by the wayside as more active party members dominate the narrative.

Some Players Cause Trouble

The flip side of a passive player is a player who’s actively causing trouble. We all try not to game with jerks, but no group is perfect. Even the best players will have bad days or bad habits that the group tolerates. Maybe the party diplomat has an unfortunate tendency to jump in before anyone else can attempt a social roll, or the highly optimized fighter thinks their extra attack per round means they should get to dictate the party’s actions.

Whatever the trouble’s exact nature, it’s the GM’s job to deal with it. As referee, they step in and make sure the problem player doesn’t hurt anyone else’s fun. The GM can do this because their position is one of social authority, and all but the most disruptive players will recognize it. When the GM tells one player to stop bullying another, it carries weight.

This authority does not exist between players. If one player tells another to knock something off, that’s at best a request between equals and the problem player may just decide to ignore it. Players can always try rallying the group to address the problem, but that’s time consuming and unreliable.

When a system limits the GM’s role, it reduces their authority to be an effective referee. This impacts the less active players worst of all, because now they have no one who can effectively stand up for them.

The Story Can Freeze Up or Fracture Without Guidance

Anyone who’s ever been railroaded through an unpleasant story can see the appeal of rules that explicitly take away the GM’s control. What’s easy to forget is that without guidance, a story can end up going nowhere or going too many places at once.

Inexperienced players might freeze when granted control of the story. They either can’t think of anything, or they fixate on mundane details and forget that the plot needs to keep moving. A few minutes of banter over the PCs’ breakfast is fun, but spending two hours getting lost in the minutiae of waffle toppings is a snooze-fest.

More experienced players can have a similar problem, but it manifests differently. Instead of freezing up, they’ll dive into the story of their own characters, regardless of what anyone else is doing. One PC might be super into political intrigue while another is all about stealing shiny trinkets from unsuspecting townsfolk. On their own, those storylines will never interact, and the game will fragment into as many pieces as there are active players.

It falls to the GM to gently move the story along when it gets stuck or to guide it back together when things fall apart. If the breakfast scene is dragging on, the GM can introduce a complication to get things moving, something that will capitalize on the PCs’ newfound camaraderie.* If the thief PC and the politician PC are drifting apart, the GM can introduce a story about needing to steal the royal signet ring to facilitate a political power play, something both PCs would be interested in.

Someone Needs to See the Big Picture

In a good roleplaying game, each player builds a character to pilot through the story. Players get invested in their characters, hence the “roleplaying” part. A player is part writer, part audience, part advocate for their character.

That’s great for a fun evening of playing Elly the Elven Evoker, but it doesn’t lend itself to impartiality. No matter how hard a player tries, it’s often difficult for them to see the difference between what’s best for their character and what’s best for the game as a whole. This becomes a problem when it steps on the toes of other players.

Perhaps Elly’s player takes serious issue with the court sorcerer’s demon summoning and decides to take the corrupted spellcaster down. It’ll further Elly’s development and make her seem like a badass, so Elly’s player is all for it. But they haven’t considered how it will affect Darwin the Dwarven Diviner’s story. The court sorcerer is Darwin’s sworn enemy, and they have a long history full of drama. If Elly scores the kill, Darwin’s story will be cut short.

Without a GM to see that bigger picture, the only hope is that Darwin’s player is aware enough to object and that Elly’s player is reasonable enough to back down. Because the GM doesn’t have a character of their own, they can view each PC in the context of the game as a whole, not just what seems coolest from an individual player’s perspective. Obviously no GM is perfect, and some will be more impartial than others, but they don’t have the interests of their own character influencing their decisions.

Even if you were somehow able to gather a group of players who are highly active, never jerks to each other, and don’t favor their own character over others, endings will still be a problem without a GM’s guidance.

A proper ending ties up all the elements introduced earlier in the story. When something important is featured, it needs to be resolved by the end or the story doesn’t feel complete.* If PC Kara is revealed to have a secret nemesis at the beginning of the campaign, that nemesis should figure in the big finale.

Satisfactory endings are always tricky in roleplaying games, even with a skilled GM. Storytelling in real time means it’s impossible to plan the addition of every new element, and some will fall by the wayside as the campaign progresses. But without a GM’s guidance, the ending will be a complete mess.

It’s the GM’s job to take the players’ cool ideas and mold them into a coherent story with an ending that leaves everyone satisfied. It’s also the GM’s job to know when enough cool elements have already been established and discourage more. PC Kara already has a whole team of bad guys gunning for her; she really doesn’t need a new nemesis on top of that. If the GM doesn’t have the authority necessary for this kind of regulation, the campaign’s ending will leave players scratching their heads and wondering how they got there.

The relationship between players and their GM is central to what makes roleplaying games work. Whether the players are a passive audience or actively engaged in their story, it’s the GM’s job to bring everyone’s efforts together into a greater whole of collaborative storytelling. That’s a difficult job, and GMs need all the tools at their disposal. Supportive rules can be a big help, but rules that limit the GM’s options rarely are. Designers who try to limit the GM’s influence think they’re giving players more chances to participate, but instead the restrictive rules just throw up more roadblocks to storytelling.

And in some not so recent ones.
Or sometimes spoken.
Enemies with guns is a classic, but your mileage may vary.
In serialized stories like TV or RPGs, you can also leave the important thing as a hook for next time.

Comments on Why the Game Master Should Be In Charge