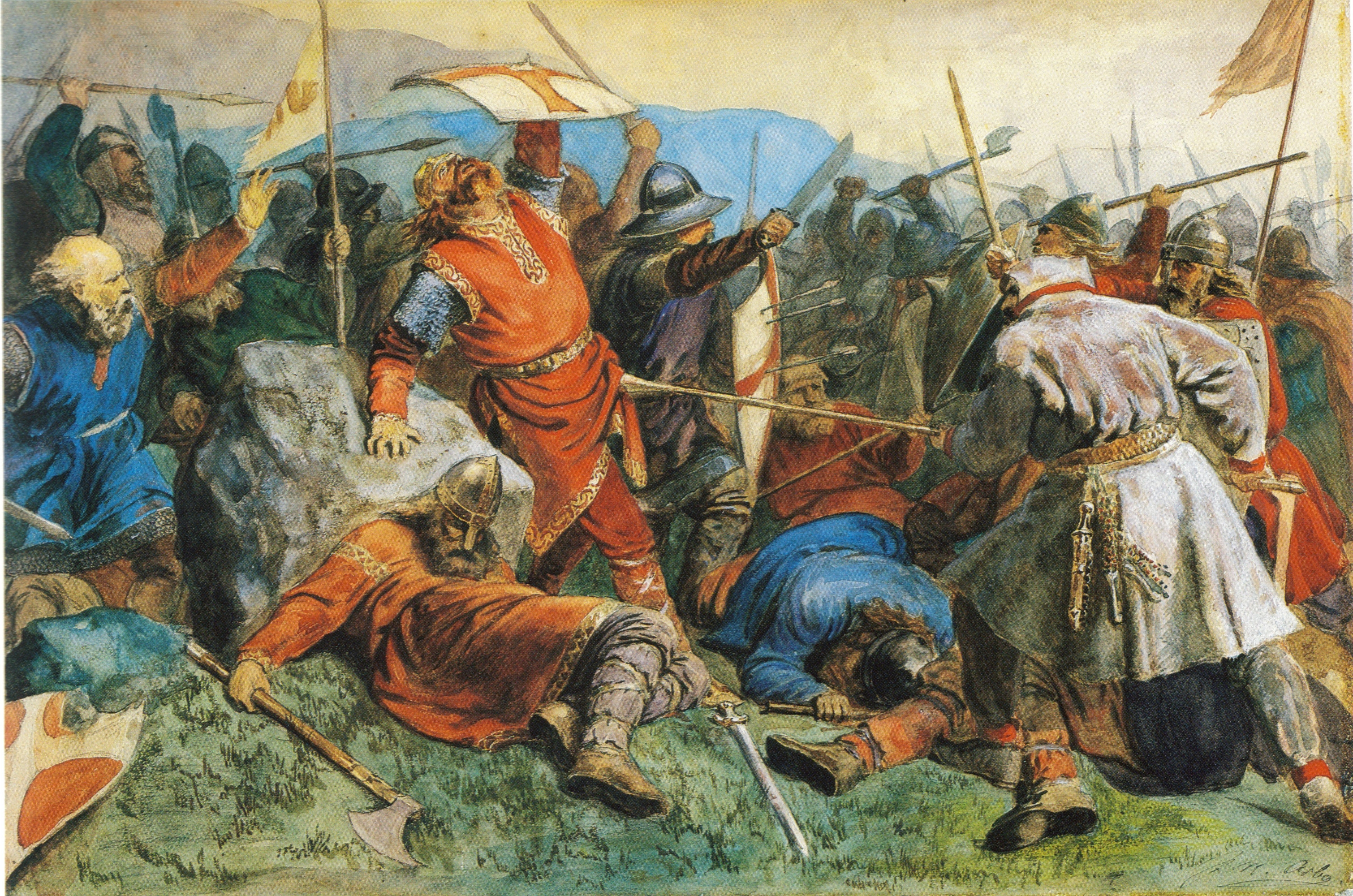 This is part 2 in the series: The Challenge of RPG Combat

Gather round, all ye game masters, designers, and RPG enthusiasts: it is time for part two of this series on extended conflict-resolution rules in roleplaying games. We refer to these rules as “combat” for brevity’s sake, even though they often include rules for car chases, verbal debates, and competitive tea parties. If a system has rules that pause the normal action of the game and provide more detailed options for resolving a problem, that counts as combat for our purposes.

Last week, I explained how in an ideal scenario, combat can benefit a campaign’s story rather than distracting from it, as the common wisdom goes. However, very few combat systems are anywhere close to the ideal. In fact they are so far from it that I would categorize most RPG combat as fundamentally broken. Despite over forty years of collective design experience, we’re still searching for a reliable way to make fun combat rules. But before we can solve this problem, we need to understand why combat is in such a sorry state.

Imagine you’re sitting down to play chess, but not the version of chess you know. In this game, each of the pieces can move a dozen different ways, and each movement option depends on where other pieces are in relation to it. You’ve played several times, but there are just too many options to keep in your head, so you resign yourself to referring back to the rule book every other move, just to make sure you haven’t done something wrong.

Does that sound like fun? If not, then you can understand why so many players abhor RPG combat. Most systems have countless rules to be memorized, from how each type of attack works to how many feet a character can run each round to what happens when someone uses a bow in melee combat. Character abilities and special gear add a whole new layer of complication, until it’s impossible for most players to keep it all straight.

The complexities of old standbys like D&D and Shadowrun are well known, but they are hardly alone. The much beloved Riddle of Steel tries to simulate every possible way a human can be injured, and the result is nothing but an enormous headache. Even Call of Cthulhu,* famous for not being about combat, has a chase system that I can barely make heads or tails of.

A certain amount of complexity is required in order to create a deep experience, but most RPGs trade a lot of complexity for very little depth. Not only does this make combat confusing and difficult to learn, but it also means combat takes a long time. What should be a quick bar brawl turns into a two-hour slog as every rule must be checked and double-checked. Is it any surprise so many players would prefer to skip combat altogether so they can get on with their roleplaying?

All right, you’ve studied the rules of this weird chess variant backward and forward, but you’re having extra trouble remembering them because they seem so arbitrary. One of your knights moves normally, but the other gets an extra space, and the only way you can tell them apart is that one knight has a tiny hat.

Second, players need to be able to imagine what their characters are doing within the fiction when they take a mechanical action. If a player succeeds on a trip action, they expect their opponent to suffer a penalty commensurate with being knocked down. If a PC has a grenade in their inventory, they expect a way to use that grenade in combat. And of course, what they imagine their character doing during combat has to make sense.

Classic RPG combat is riddled with unintuitive rules. Hitpoints are perhaps the most obvious example, with characters routinely able to withstand dozens of sword hits or, worse, gunshots.* But that’s just the tip of the iceberg. Turn-based movement means that armored paladins must stand still while enemies dash past them to attack the spellcasters, and powerful abilities are limited to an arbitrary number of uses per conflict. It quickly becomes impossible to reconcile what happens in combat with what’s happening in the fiction, and eventually players stop trying.

A lot of newer systems have tried to solve this problem by making the rules more abstract, and while that’s a good idea in theory, in practice it rarely works out. Abstract systems often leave out important options that players feel their characters should be able to take, like how Mouse Guard* has no option to retreat from a conflict once it’s started. Another common problem with abstract systems is that it’s often difficult to tell what a given option translates to in the fiction. What does it mean to choose “defend” in a car chase? The rulebook can offer explanations, but if those explanations don’t make intuitive sense, players will have a difficult time remembering them.

You’re really determined to play this chess variant, even with the dozens of extra rules, even with the tiny hat of extra movement. No set of rules is too obtuse for you! But then your opponent sets up their pieces, and instead of pawns, they start with a frontline made entirely of queens. That sounds… fun?

Game balance is always tricky, and no game is ever perfect, but most RPG combat systems are so unbalanced it’s a wonder their books can stay upright on the shelf. Often, this imbalance comes from character abilities. RPGs like Eclipse Phase and Tenra Bansho Zero have so many different options in character creation that some are bound to be overpowered – not to mention all the ways those abilities can combo into an ultimate chain reaction. Players who have extra time to spend analyzing all the best options will quickly leave their peers in the dust.

Alternatively, balance issues can creep in through the combat options themselves. In Mouse Guard, the best way to win conflicts is to use the Attack action over and over again, ignoring any other options. In 4th Edition Legend of the Five Rings, there’s rarely a reason for shugenja to ever leave the Defense Stance. All other stances are inferior for spellcasters. Sometimes, imbalance comes from truly bizarre sources. In D&D, playing without a battle map causes major problems, because no one can hold all the different ranges in their head. In the Mistborn RPG, GMs have to keep careful track of how many minutes and seconds a power lasts if they wish to preserve balance.

A Detailed Explanation of Balance Issues

No matter where imbalance comes from, it has the same result: frustration at the table. Players feel misled for picking an option that looked good but turned out to be garbage, or they’re simply discouraged because their fellow PC is so much more effective than they are. This is what leads so many players to check out the moment combat begins; they have no interest in a game that’s rigged from the start.

You’ve had it with this convoluted, unbalanced chess variant your friend keeps trying to make you play. In its place, they offer you a different option, one that’s perfectly balanced and super simple, they promise. You agree and discover it’s a board with only two rows, and each player gets only a single pawn as their piece. You take turns moving the pawn closer to the other player’s side, and whoever gets there first wins. Are you happy now? No? Why are you so difficult?

The final nail in RPG combat’s coffin is that few systems offer players any meaningful choices. Sometimes this is a result of poorly balanced rules. As we discussed in the previous section, Mouse Guard combat technically has four different options a player can choose from, but Attack is so much more efficient that it’s the only one worth using.

Alternatively, static combat can come from overspecialized character creation. 3.5 D&D combat had numerous martial options, from trips to grapples, but unless players built a very specific type of character, they would only ever take the basic attack action. Spellcasters had more options, but even for them, there was almost always an obviously optimal attack spell for each situation.

Finally, some combat systems are static by design, with no interesting options to start with. 5E D&D officially did away with most of its combat actions, leaving martial characters with only Attack and the seldom-used Grapple. Fate is even worse, with rules that lead to doing exactly the same thing every round until the enemy runs out of hitpoints.*

No matter the cause, static combat systems are a chore to get through. Meaningful choices are the foundation of all game play. They are what make games fun, and without them, combat is simply an exercise in running out the clock. Meanwhile, the narrative and roleplaying sections of an RPG do allow meaningful choices, as long as the GM is doing their job, so it’s no surprise that many players view combat as a penance they must pay in order to reach the fun part of the game.

Not every combat system is guilty of every problem in this post, but the majority score at least a two or three out of four. These problems are so common that they render combat inaccessible to vast swaths of players, and it’s no wonder that so many indie developers are leaving combat out entirely. That’s a legitimate design choice, but it means giving up all the potential benefits an extended conflict system can provide.

Don’t worry – all is not lost! In among all the dreck, a handful of combat systems manage to shine. If designers are willing to learn from these positive examples, we may yet live to see a vast improvement in a vital element of the medium. I’ll talk more about that next time in Learning From Successful Combat Systems.

7th Edition.
Many systems claim this is an abstraction, but it rarely works out that way.
Which I love.
For new Fate players, that means attacking individually each round, and for veterans it means combining their attacks each round.

Comments on Why RPG Combat Is Broken