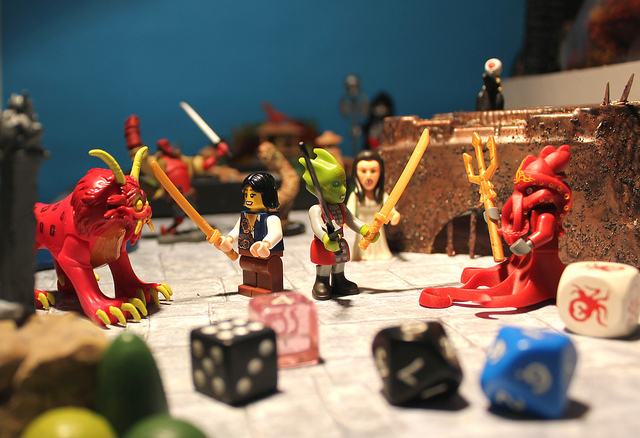 Roleplaying games have their roots in wargaming, where each character was little more than a machine for killing goblins and gaining loot. It’s no surprise that many GMs still see their campaigns as a one-way street. The GM says how it’s gonna be, and the players enjoy themselves – what could be simpler?

But games have moved beyond that wargaming model. Even Dungeons and Dragons, the champion of goblin killing and loot gaining, now has sections in its rules about how to craft a story. With that paradigm shift, it’s vital to treat your players as partners in this collective storytelling experience. You don’t need to ask in advance before every plot reveal, but you should be in constant communication so you know how your story is being received and when you need to make changes.

Characters Are Extensions of the Player’s Self

A PC is a very personal thing. Players spend hours crafting every aspect of their characters. This could mean poring through the book for an extra +1 to attack rolls, or it could mean crafting an intricate backstory full of drama and conflict. A character is more than a vehicle to pilot through the adventure; they carry a piece of the player’s psyche.

So it’s critical for you to check with the player before making big alterations to their character. Some of this is obvious. You wouldn’t reveal actions from a PC’s past without making sure it’s something they’d actually do first. You wouldn’t unilaterally decide that a PC’s loving relationship with their sibling is actually hateful and toxic.

But some alterations are less obvious. For example, if a PC ends up in a situation where they must choose between two evils, that will be a major change. From that point on, the character will always be someone who chose evil, even if there was no other option. Some players will really enjoy this. Others will not. They didn’t want their character to be someone who chose evil. Now their character doesn’t feel right.

When a character doesn’t feel right, it’s like wearing clothes that constantly itch. It’s hard to enjoy anything when your clothes itch. Even if you go on to craft the most amazing story, your player might not be able to enjoy it because their character doesn’t fit anymore.

If you’re planning something that will have a big impact on a PC, you have two basic options. The first is to simply tell the player, “Hey, I’m planning this. What do you think?” If that’s not viable, the second option is to give the character an out in case the player isn’t into your idea. Sure, the moral quandary you put before the character might look intractable, but you’ve got a solution ready if the player just isn’t enjoying themselves.

Players Know Their Own Enjoyment

The goal of a roleplaying game is to have fun; that’s what it says in the intro section of nearly every RPG book ever printed. This is repeated so often that it can sound tired and trite. But it’s still true.

Every GM has their own idea of what will make for the most fun in their game, and that’s great. Variety is the spice of life. But if you really want to know what a player will enjoy, you should ask them. That’s right: players are really good at knowing what they’ll enjoy in a game.

This doesn’t mean you just say nothing and wait for the players to fill in your blank page. That’s an abdication of your responsibilities. Instead, you make the best story offering you can, and then you ask the players what else they’d like and what they’d like to change. That’s right: what they’d like to change. If you’re serious about collaborating with your players, and you should be, you have to be willing to alter your vision based on their feedback.

As the GM, it’s your job to make sure each node in your storytelling collective is working at full potential. That means checking in with the players who aren’t as active and encouraging them to offer up ideas. Otherwise, you’re not getting the full potential out of your medium. If you find that the mechanics of the game are getting in the way of a less active player expressing themself, it’s your job to change the mechanics.

And when players do produce ideas, you need to run with them whenever possible, even if they seem silly. While you’ll occasionally have to say no to protect the rest of the game, this should be a last resort. If you’re willing to work with the player, most ideas can be shaped into something that will better serve the story.

I’ve already mentioned how important it is to respect a player’s wishes about their character, but PC death is such a big issue it deserves its own section. Every player has a horror story of losing a beloved character and how it ruined the game for them. This is because most GMs have been conditioned to treat character death as something that just happens.

Even today, most roleplaying systems have death as the unavoidable consequence of running out of hitpoints. Too many unlucky rolls in a random encounter, and a character is just gone. This model worked when games were primarily an exercise in combat tactics, but it is incompatible with more story-driven play.

In order for your campaign’s story to mean anything, players must be invested in their characters. Otherwise, the group is just rolling plastic polyhedrals on pieces of paper. It is unworkable to ask for that level of investment from your players and then let their characters die from a random roll. Neither is it acceptable to craft a plot where a character dies without getting their player’s okay, no matter how dramatic the death.

This is a matter of trust. Players will not invest emotionally in their characters unless they trust you not to spring death on them at any moment. If a character is ripped away without consent, it can be traumatizing. At the very least, it ruins someone’s day and snuffs out the potential fun they could have had with that character. That’s not something you want at your table.

On the other hand, if the player is into it, then character death is a fantastic opportunity for drama and catharsis. It’s a chance to explore loss from a safe place or live out a fantasy of sacrificing everything for a worthy cause. The only way you can ensure this result is to always check first to see if a player is okay with their character dying. If they’re not, then don’t kill their character. It’s that simple.

Game Masters Are Stewards of the Group

In previous articles, I’ve advocated that the GM should have full authority over their games, and I stand by that position. But a GM’s authority isn’t so you can push your own ideas at the expense of all others; it’s so you can be of better service to the group. Your goal as a GM is not to rule over the game like some feudal warlord, but to promote fun as best you can.

We run games not for our own glory, but for the enjoyment of our players. Being a game master means you have a position of responsibility. To fulfill that responsibility, you must communicate with your players. Otherwise, how are you going to know what they want?

And when players tell you what they want, you have a duty to give it to them as best you can. Respect their desires and incorporate them whenever possible, or else you’re just throwing your weight around. If you have to overrule a player, it must be for the good of the group, not just for your personal interests.

Roleplaying is one of the most personal storytelling mediums in existence. In order to get the most out of it, players must open themselves up, which means there’s a substantial risk of getting hurt. Your job is to build a safe place for your players, somewhere that minimizes the danger. Consent and collaboration are the building blocks of that space. Without them, your games will never reach their full potential.

Comments on Why Player Consent and Collaboration Are Vital