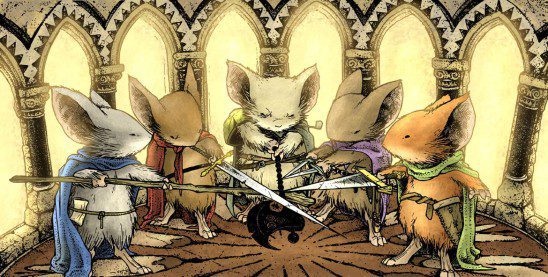 The Mouse Guard roleplaying game is based on a comic book series of the same name by David Peterson. The basic premise is mice with human level intelligence trying to protect their fragile civilization from all that threatens it. These threats include weasels, , foxes, and the spring rain. The comics have received favorable reviews from all quarters, and come highly recommended. I have never read them. Not because I don’t want to, but because I just haven’t found the time or money. I say this so you may that understand my feelings on the roleplaying game comes purely from that angle. I have no existing love of the setting that could possibly prop up a weak system.

That said, I love this game. I’ve been a Luke Crane junkie ever since I discovered Burning Wheel, and not even having my heart broken by Burning Empires can change that. For a long time, I’d pretty much accepted that Burning Wheel would always be my favorite roleplaying game, but now that’s coming into question. Mouse Guard is everything I want in a game. It has good setting material, great mechanics, and a core die mechanic I’m more than a little fond of. I love playing this game, and so will you.

Reading through the rule book feels like looking at a well designed race car. There is nothing there that doesn’t need to be. All the inessentials have been removed, and everything that’s left is focused on telling a great story in the way only roleplaying games can. Here are just a few examples.

Burning Wheel, great as it may be, is a pretty standard system when it comes to narrative structure. The GM runs players through a session based only on their own best guess at pacing and flow. Story points happen when the GM thinks they should happen.

Another Luke Crane game, Burning Empires, is an entirely different animal. This game has a highly structured format the GM must conform to when constructing scenes and placing them into a session. There are rules on how many statted out NPCs can exist at one time. Everything the GM does is subject to as many or more rules as the player’s actions.

The idea in Burning Empires is a good one, but it can be hard to manage in play. Believe me, I’ve tried. Four times. Mouse Guard, on the other hand, strikes a perfect balance. The narrative mechanics are just sturdy enough to give the GM something to rest on, but not so constraining that it limits what they can do.

I can’t say if the goal in writing Mouse Guard was to strike a balance between these existing games, but if so, mission accomplished. If not, then well done anyway. It’s always great to see game designers realize what worked and what didn’t work, then improve their games as a result.

I mean that in only the best way. Put simply, running a game is hard. It takes a lot out of the game master, and often requires hours of prep time before hand. There’s a lot of leg work and detailed planning that must be taken care of in addition to crafting a good story. I tend to get painful headaches from spending long sessions making sure everything is exactly right.

Mouse Guard fixes most of that. While no system can run a game for you, this one takes care of a lot of the nitty-gritty that it’s so easy to get stuck in. Never before have I found it so easy to design fun adventures for my group to play through every week, and I rarely have to plan for more than an hour.

The game accomplishes this by paring the session down to what’s really important. At the most basic level, each adventure is a series of obstacles punctuated by a full blown conflict to spice things up. Mouse Guard makes it really easy to construct that base level, leaving the GM free to lay a good layer of story and drama on top of it.

If a game is slowing down or getting stale, the conflict and belief mechanics offer plenty of spontaneous ways to make things interesting again. The GM searching for inspiration need only glance at the Patrol Leader’s goal saying “I must keep the tenderpaw safe” and they know that a sudden snake attack threatening said tenderpaw will suddenly get all the players involved again.

Essentially, Mouse Guard lets GMs focus on what’s really important to their game. Their heads don’t have to be filled with precisely balancing an encounter or making sure everyone gets exactly their allotted share of loot. That isn’t really what makes a game fun. At the same time, it’s more than just the GM setting down and telling a story to the table. Players shape the story too, through the use of their skills in service to beliefs, instincts, and goals.

There Are Still a Few Issues

No system is perfect, and I have noticed a handful of flaws with Mouse Guard, much as I might wish not to. Fortunately, most are fairly simple to solve. For example, mathy types will notice that the ‘attack’ maneuver in the conflict mechanic is overpowered. There isn’t much reason to choose anything except ‘attack’ over and over again. This kind of problem is persistent across Luke Crane games, and I have as yet to figure out exactly why. However, it’s incredibly easy to fix. Just tweak the ‘defend’ maneuver so it gives a small bonus against ‘attack,’ and you’re golden.

There’s only one problem I haven’t been able to solve so easily, and that’s the group size limitations. Mouse Guard is clearly a game that wants you to have at most four players. This makes sense to a degree, since that’s the largest the group in the original comic ever gets to my knowledge. However, if you have five or six players, the game starts to fray at the edges. The conflict system has trouble with more than 4 characters, and it can be difficult finding things for everyone to do.

Obviously, large groups can be problematic in any game, but with Mouse Guard it seems a little more pronounced because the system is so fine tuned everywhere else. So far, I’ve dealt with the problem by splitting the party into smaller groups and switching between them often. Mouse Guard still works for larger groups, just not quite as well.

As a fanatic GM, it’s always gratifying to see a new game that pushes the envelope. So many systems coming out nowadays are aimed at further polishing something that already exists, rather than any kind of new innovation. Mouse Guard takes an approach to collaborative storytelling that is different than anything done before. Just as importantly, it handles that approach well. The system plays like a dream, and the setting is a great take on the classic “world filled with monsters that want to eat you.” I cannot recommend enough that you give this game a try.