Why & How to Kill a Hero 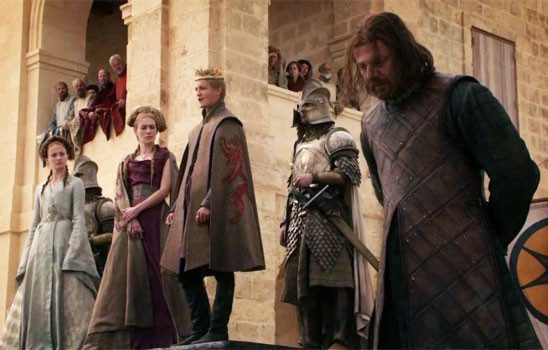 The famous execution scene in Game of Thrones.

Unless you’re writing a slasher,* killing an important protagonist is a tough decision that can have a profound effect on your story. For most works, it will have both benefits and drawbacks. Understanding the dynamics of character death can help you avoid pitfalls and select the best tactic for your story.

Reasons to Kill a Protagonist

The majority of stories do not include the death of an important hero, and audiences know that. So by default, they’ll think all your major protagonists will reach the end mostly unharmed. In some stories, that’s okay. But if your story (or series especially) includes putting your heroes in mortal peril, the audience will assume you’re bluffing.

If you want danger that matters, you have to show your audience you mean business. The only way to do that is to kill a character. Not just any character, but one your audience wouldn’t expect to get the axe. After that, most people will realize they can’t predict deaths in your story, and no hero is safe.

A classic example is the death of Ned Stark in Game of Thrones. Before he dies in the first book/first season, most people think he’s the main character of the series and therefore immune to danger. His execution makes them wonder who will die next.

Stories aren’t just about success; they’re also about failure. A final victory has more impact if it comes after a loss. If the heroes get a slap on the wrist for failing, it will cheapen their happy ending. If someone dies, the entire experience becomes more meaningful.

Consequences that matter are also essential to narrating difficult dilemmas for your characters. Making your main character choose between accomplishing critical goals and letting someone die will create a richer and more nuanced story than one where every choice was obvious.

Last, when a character dies for what they believe in, it demonstrates their heroism better than if they beat the odds. If a hero doesn’t die, their sacrifice isn’t as real.

In the Deep Space Nine episode The Ship, Sisko gains the opportunity to acquire an enemy vessel that could be critical to wartime intelligence. However, keeping the enemy ship will delay his away team’s return to the station, and a member of the team desperately needs medical care. The episode establishes the personality of the endangered team member early on, so when Sisko has to choose between letting this person die and giving up the ship, viewers understand how difficult the decision is.

To Position Another Character

Removing a character might be the only way to make another character take the role we need them to. Most often, this means axing a powerful character that supports the main character. If your hero is a kid, their parents better be away, or there won’t be any reason for them to tackle challenges themselves. If the hero has a mentor that knows swordplay and wizardry, that mentor better disappear before it’s time to fight off the baddies. You can remove support characters without killing them, but if you need your hero to receive loving support in book one and then go off on their own for five more books, death may be the best explanation for the supporting character’s absence.

Killing a support or ally character can also motivate a reluctant hero. If your main character is done with the violent ways of their youth, or would prefer running a bookshop to saving the world, killing someone they care about can draw them into the conflict. At that point, staying on the sidelines would shame the memory of their loved one.

A word of caution: while these deaths are useful, they lead to troublesome trends. Because women are stereotypically both supportive and well-loved, female characters are disproportionately killed off. Also, as mentors are usually old, killing them could mean that only the young and beautiful survive. You can combat these patterns by including a balanced cast in your work. Empowering your doomed character is another good idea – let them die heroically at a time they chose.

In Star Wars: A New Hope, Obi-Wan decides to face Darth Vader. He knows it will mean his death, but he feels it’s the right time. Without his guidance, Luke is left to continue the war efforts and pursue Jedi training on his own.

Reasons Not to Kill a Protagonist

To Preserve a Light and Fun Mood

It’s important to manage the tone of your story, and for many stories, that means keeping the heroes alive. Imagine if Anna had actually died in Disney’s Frozen. It would have violated the audience expectation that Frozen would be a feel-good story and left small children in tears.

If you’re writing a story set in a utopia with trivial problems driving the plot, don’t kill anyone important. Even if the story gets darker as it progresses, give your audience big hints that your world is unfair before axing anyone.

To Appeal to a Wider Audience

Many people have a strong preference for either light or dark stories. However, people who prefer dark stories are more likely to tolerate light ones than vice versa. People who prefer lighter works often do so because dark works make them upset, possibly for days afterward. That’s why they’re more likely to skip books or veto movie nights when their preferences aren’t met. And let’s not forget children; family movies are light movies.

So if you’re looking for the widest possible reach, leaving out graphic or upsetting deaths could give you an edge.

To Keep Your Existing Audience From Rage Quitting

Even if your fans like tragic stories, they could still blow their top when you kill their favorite character. If your work has aspects they enjoyed outside of that character, most fans will return once they’ve cooled down. But if they were hanging on just to follow one hero, killing that character will remove the only reason to continue your story.

Fans need characters to care about. Don’t kill so many important characters that you’ll need to continually replenish them. If your audience thinks all the characters you introduce will die, they’ll avoid becoming attached. That means sooner or later, they won’t be invested enough to continue.

If you do decide to go forward with killing your character, here are some tips:

Killing a redshirt, mentor, or fridge woman won’t help you create a sense of threat or consequences in your story. If anything, predictable deaths reinforce the notion that the real heroes are safe, because the storyteller is following conventional patterns.

The best way to keep deaths from being predictable is to resist introducing characters just to kill them off. Your audience can tell when a character is fodder. Instead, make sure everyone who dies has a significant role in your story and is introduced as early as heroes who survive.

That is, unless you want to soften the blow. If you need a death to position another character, but you must preserve the light tone, making the death predictable will help. In these cases, I recommend foreshadowing their death.

Don’t Bring Them Back to Life

It’s bad enough that audiences assume heroes are immune to danger; some storytellers make it worse by narrating the death of a character only to bring them back again. Most often this entails revealing the character never died to begin with, though occasionally technomagic is used to resurrect them. Regardless, the audience is surprised by a character death, only to find out it was fake.

The temptation to do this is understandable. Since audiences don’t believe anyone will die, a natural response is to increase the level of threat until they believe again. Fake character deaths can do that. But if you use them, you are making the problem worse for yourself and for every storyteller trying to establish threat in their scenes. It teaches audiences that even when a character appears to be dead, they’re probably just fine. If you narrate a not-death, I hope your story’s a comedy, because it won’t feel like your characters are in danger ever again. When the audience knows you’re bluffing the threat in your scenes, the only cure is to play it straight. You gotta kill someone important.

However, if your story depends on bringing someone back from death, you can make it a little better by giving them significant penalties. They should come back haunted, crippled, or transformed (into a ghost maybe). That way the death still means something, even if it’s something with less impact.

The result of so many faux deaths is that storytellers have trouble convincing audiences that characters are dead – even when they really die. You can pour your heart into crafting the perfect, tragic moment, but if you aren’t careful, your fans will be too busy wondering whether the character’s actually-dead or fake-dead to feel anything.

That’s why you have to show important deaths right in the scene. No background deaths, no character telling another character someone critical is dead. The audience needs to see it, and if possible, they should see it in detail. Yeah, it’s gross, but if a monster cuts your character into tiny bits and then sets those bits on fire, there’s less room for uncertainty.

If your world has technomagic that could enable any kind of resurrection, you’ll need to explain why it won’t work on the dead character. A good way is to let your grieving characters try it and fail.

Next, your grieving characters should go through the mourning process and find emotional closure. Character mourning will give upset audiences an outlet; then when the characters move on, the readers will too.

Just because the character is dead, doesn’t mean they’re irrelevant to the story. The surviving characters can read through their old letters, speak to their family, or go through their things. That might turn up something useful, something that could affect the story’s outcome.

Keeping them relevant has many benefits. For one, it makes the mourning process more realistic and your story more believable. Second, it will help appease fans who loved the character you killed. Last, if your audience expected your character to be important throughout the story, it will help satisfy that expectation – but in a more interesting way than anticipated.

If you decide not to kill a hero, consider lowering the stakes until death is no longer in question. Instead of tempting death, your character could risk losing something that’s incredibly important to them, whether it’s their shop, their relationship with their daughter, or even their memories. Regardless of whether anyone dies, one thing is important: you can’t master poker by bluffing every round.

Then yes, kill off lots of heroes, just remember to handle karma while you’re doing it.