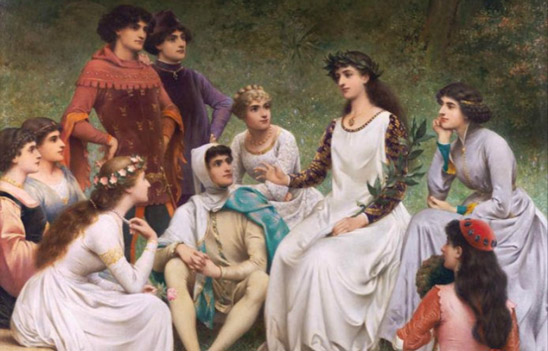 Writing and roleplaying are vastly different mediums. Writing offers much greater control over the story, but roleplaying has something else: a strong connection with the audience. Whereas writers have limited knowledge of how readers respond to their work, game masters (GMs) must be closely in tune with the experience their players are having. This closeness gives us an opportunity to understand storytelling in greater depth. Accordingly, one thing writers can better understand from roleplaying is the concept of flavor.

In tabletop roleplaying, flavor represents how a story element is described, independently from the rules of the game. Let me give you an example.

Let’s say I’m playing a character who wields a sword. That sword allows me to deal 10 damage to an enemy.* After I get this sword, my GM and I might decide that my sword isn’t a normal sword – it’s a cool flaming sword. During the session, the GM describes how my sword has blue flames that grow larger the angrier I become. After I deal damage to an enemy, my GM describes how that enemy has been burned by the flames. However, my sword still deals 10 damage to my enemies. The thing that distinguishes it from a regular sword isn’t any game rules: it’s flavor.

Now let’s say that my GM decided to make some house rules to back up how my sword has flames. It deals an additional two damage to all enemies, kills snow monsters with one hit, and can be used in place of a torch as a light source in dark dungeons. My sword may still be given some flavorful description, but the flames are now more than flavor; they are backed by game rules.

The Strengths and Limits of Flavor

Flavor isn’t trivial in roleplaying games; it’s an important part of the experience. Roleplaying systems sell themselves largely on atmosphere, and the flavor that’s included in the game book is an important part of that. A GM who offers colorful descriptions will find it easier to entertain players. When a player fails a roll, flavor can soften the blow. For instance, if a player character fails to pick a lock, the GM can narrate how they were interrupted by a guard before they had time to finish. This way, the player doesn’t feel like their character failed because of incompetence.

As much as flavor can make a game feel engaging, it has a tendency to disappear over time. Let’s go back to my sword with blue flames. When I first get this sword, my GM will probably put a lot of energy into describing it and how those flames make my enemies shake with fear. I’ll also spend time roleplaying what it’s like to wield a flaming sword. Perhaps I’ll try to use it to cook my lunch, or I’ll pull it out to prove to some villagers how powerful I am. However, the longer the game continues, the less we’ll do these things. After a few sessions, the flames will lose their novelty and describing them won’t be worth the bother. Pretty soon, I might as well have a regular sword, because the game will be exactly the same.

That is, unless there are game mechanics built around the flames on my sword. If there are, the game will always feel like I have a flaming sword. Why? Because those flames matter. When my party runs into a snow monster, I’ll race out to meet it because my sword can melt the thing with one slice. The next time I go into a dark dungeon, I’ll remember that I already have a light source handy. I’ll mention that I’m drawing my flaming sword so my GM knows I don’t need a torch to see by.

If you’ve roleplayed a bunch, you’ve probably come to appreciate how game rules can make story elements feel more real. Anything with rules has more weight to it because my character’s success or failure depends on those rules. If I’m GMing a game, I’ll make sure I have rules for anything that should be a significant part of the player experience. Otherwise my player’s initial excitement will die off into dull disappointment.

How Flavor and Rules Translate to Writing

At first glance, written stories may seem like nothing but flavor. Some storyteller invented every detail without consulting the dice. But even without players present to advocate for their characters, writers must create a similar bond between readers and the protagonist. For the plot to be meaningful, readers have to care whether the protagonist succeeds or fails. Once they care, whatever affects the character’s chances of success or failure will feel like it matters. Whatever doesn’t change the outcome remains flavor.

Instances of writers who failed to convert flavor to story impact are abundant. How many times have you seen a female love interest do something badass but unimportant when she’s introduced, only to be damseled as soon as the plot heats up? Regardless of how she’s described, she’ll never feel like a great warrior unless she wins a fight that matters to the story. If she saves the protagonist from getting killed, now she’s a great warrior. Without her victory, the protagonist would be dead.

This concept is also important for depicting a setting. Settings come with a wealth of description, and not all of it can influence the plot. That’s okay – flavor is important too. Flavor creates novelty that keeps readers engaged while they build a bond with your protagonist. However, a unique setting that is nothing but flavor falls flat.

Let’s say your protagonist is the size of a mouse. If a cat makes chase at the worst time, preventing them from reaching their destination, your setting will feel real. If you describe how they are the size of a mouse but the story unfolds in the same way it would as if they were big, their miniature size won’t mean much – especially as the story continues. Making a lasting impression requires more than flavor.

Whatever’s important to your setting or characters should also be important to your plot. If your description says one thing and your plot shows something else, readers will feel cheated. If you’re a GM facing a table full of players, those cheated-feeling players will give you an earful.

Damage would rarely be a flat number like 10, but we’re trying to keep this simple for the non-roleplayers.