Speculative fiction loves to give its heroes signature weapons, some of which become as memorable as the heroes themselves. This is most common in high fantasy, but it also crops up in urban fantasy, superhero stories, space opera, and cyberpunk. From swords and axes to revolvers and EMP cannons, these signature weapons make themselves known in all kinds of stories. While they’re most often swords, they don’t have to be! The trick is to make sure they’re cool. There are a lot of ways to do that, but today we look at some of the most common, and, for some fun, what common methods don’t make a weapon cool and memorable.

Not Cool: Being a Katana Look, the katana is as good a sword as any other. It can get the job done in its intended role, and like most slashing swords, it does better against unarmored opponents. But the katana isn’t a supersword. It’s not faster or more agile than other swords of similar size, and it certainly can’t cut through metal armor.

Despite all this, white fantasy authors have a habit of making their heroes’ signature weapons katanas. Wheel of Time does it, Name of the Wind does it, as does just about the entire cyberpunk genre. This is a bad plan, and it will generally have the opposite effect of what you want.

For one thing, katanas are so overused that they’ve become cliché. Any sword-literate readers will recognize that a katana is just another sword, and they’ll be irritated that you tried to slip this trope past them. Even readers who know nothing about weapons will probably notice that katanas are awfully common.

For another, katanas don’t actually make sense in most spec fic settings. Unless your fantasy story is set in Japan, a katana won’t match the setting’s other weapons, so it’ll just seem out of place. Scifi settings can more easily justify why the protagonist would have a katana, but that will raise the question of why katanas specifically and not any other type of melee weapon.

This brings us to the final reason that this is a bad idea: it reeks of exoticism and Orientalism. The katana is treated as a supersword because it comes from the mysterious Far East, where everyone is so damned wise and mystical. This trope isn’t quite as racist as assuming that Europeans are inherently smarter than everyone else, but it’s not too far off. 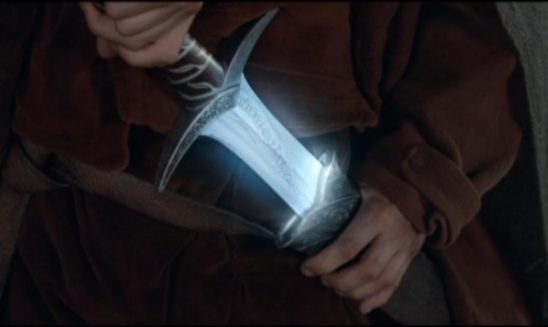 In The Lord of the Rings, Sting glows when orcs are near. In Arthurian tales, Excalibur is stuck in a stone. In the anime Inuyasha, major antagonist Sesshomaru has a sword that heals any who are struck by it. These weapons are all cool and memorable, and it has nothing to do with how well they stab things.

Giving your weapon a special ability or property unrelated to combat creates instant contrast. Weapons are tools for killing, so a weapon that does something else sticks out in the audience’s mind. We’ve all seen weapons that hack and slash, but a spear that sniffs out the blood of your enemies? Now that’s something you don’t see every day.

If you go with a special ability, make sure it’s useful to your hero. A flail that always knows where the nearest submarine is might be memorable, but only because it’s hilariously useless in most settings. Fortunately, most adventure stories offer a lot of options for noncombat abilities. Your hero could have a bow that grants them a bird’s eye view of the area when they send an arrow arcing overhead or a mace that can sense the footfalls of approaching creatures when pressed to the earth.

The more relevant a weapon’s special property is to the plot, the more memorable that weapon will be. Arthur’s sword is actually far more interesting before he pulls it from the stone, since afterwards it’s mostly just a sword. Similarly, the MCU’s Mjölnir can only be picked up by someone who is sufficiently worthy, but this is only important a handful of times across the hammer’s many appearances, so it doesn’t stick out as much in viewers’ minds.

Not Cool: +1 to Attack and Damage An extremely common mistake even among professional storytellers is that doing more damage makes a weapon cooler. This is so common, it even shows up in Infinity War and Endgame, two of the highest grossing films of all time. You might remember that in a previous MCU film, Thor loses Mjölnir as part of a character arc where he realizes he didn’t need a weapon to be worthy.

Turns out he very much does need a weapon for merchandising though, so in Infinity War, he gets a shiny new axe. This axe also returns to his hand after being thrown, and he can jump really high by swinging it. No word yet about if only the worthy can wield it. So how is this axe different from the old hammer? It’s not, except that it does more damage in some undefinable way. Everything Thor does with his new axe could have been accomplished with Mjölnir. The only change is that now his character arc from the previous film is void. I’ll always remember the name Mjölnir, but I had to google that the axe is named Stormbreaker.

Audiences cannot see the math that drives your world. Even if you have a very robust system for calculating exactly how much damage each weapon does, it’s unlikely to come across in a meaningful way. Audiences aren’t particularly interested in watching imaginary DPS numbers go up; they want to see how a signature weapon affects the story.

If you want to make your signature weapon cooler by enhancing its base characteristics, then your best option is to follow the example of the subtle knife from His Dark Materials. This blade is so sharp that it can cut through literally any material, including the barriers between worlds. This has a major effect on the plot, and it also makes the knife something of a liability, as a minor mistake can be deadly when wielding it.

It’s also important to note that the subtle knife’s wielder doesn’t actually get into a lot of melee fights. If he did, a knife that can cut through anything would probably be overpowered, so keep that in mind when turning a weapon’s destructive power up to eleven. It can be distinctive, but it only works in very specific plots. 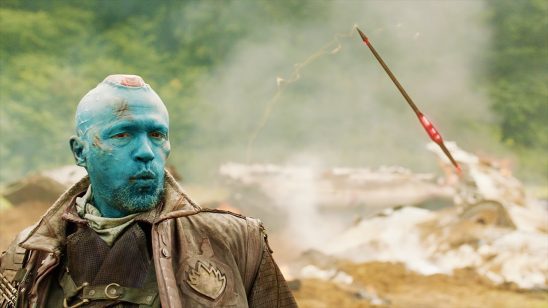 Making a weapon that’s extra good in a fight works better when it does more than just hit harder or more accurately. If you want your weapon to stand out, then its combat powers need to fundamentally change the way its wielder fights. The weapon should provide new options that alter the path of a battle; otherwise, it will quickly fade from memory.

While Mjölnir’s being picky about its wielder isn’t particularly interesting, what it does in a fight is great. First, Mjölnir returns whenever Thor throws it, which is a strong ability even if it doesn’t directly lead to skulls being crushed. Captain America’s shield works the same way,* which is way more interesting than whatever being made of vibranium is supposed to do. Cap also gets bonus points simply for using a shield, which is quite rare as far as signature weapons go.

Thor’s hammer also gives him a limited form of flight, or at least very long jumps. Also in the MCU, the sometimes villain sometimes hero Yondu controls his enchanted arrow through whistling, allowing him to engage opponents without ever moving.

Like noncombat abilities, your options here are near uncountable. You might craft a hammer that causes earthquakes when it strikes the ground or a dagger that opens small portals to stab enemies through. Movement related powers are always a good bet, as a fight will be very different if the hero can dart around the battlefield by shooting a crossbow bolt at wherever they want to go. When it comes to flavor, authors have a bad habit of assuming more description will make a weapon more memorable. Tolkien in particular loved to give every major character’s sword a name and a backstory. Meanwhile, when we first see Kvothe’s sword in The Name of the Wind, Rothfuss describes it as being the pure essence of a sword, somehow more swordlike than any other sword.

None of that actually helps. Most of Tolkien’s sword backstory is just unnecessary exposition with nothing to do with the plot, far more than is necessary to give Middle-earth a sense of history. Aragorn does use Andúril to prove his identity a few times, but otherwise it’s just a sword. Sting is far more memorable because it actually has unique properties. And to be honest, I have no idea what Rothfuss was trying to do. I guess it is memorable, but only for being unintentionally funny.

You’ll get the same result from spending paragraphs describing how the moonlight reflects off your weapon’s edge or pouring over the facets of every gem in the pommel. It’s good to describe what a weapon looks like, but piling on more flavor doesn’t make it more memorable. If the weapon functions like a mundane weapon, then it will stay a mundane weapon as far as your audience is concerned. 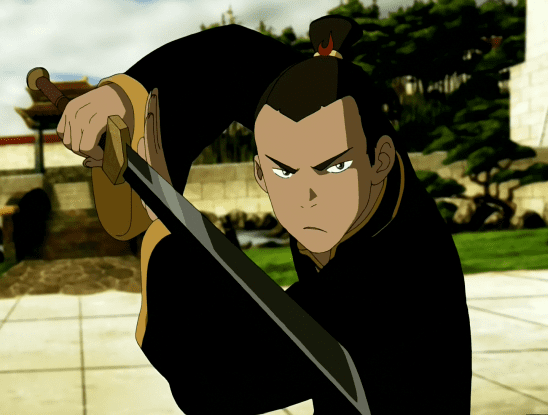 As a final option, it’s also possible to make your signature weapon cool without any magic or fancy tech whatsoever. This is the most challenging option, not nearly as popular as lightning bolts and proximity-activated nightlights, but it can be done. You just have to find a way to make your weapon matter in the plot.

A good example of this is Rand’s heron-marked sword in the early Wheel of Time books. The heron is the mark of a blademaster, but Rand definitely isn’t a blademaster when he gets the sword from his father. While the mark provides some intimidation value, it also draws unwanted attention from bravos looking to make a name for themselves. This even creates a small subplot, where Rand is motivated to learn sword fighting so he can be worthy of his father’s weapon.

This is super memorable, and it far overshadows the fact that the sword is actually magical as well. It’s enchanted so it never rusts or needs sharpening, and it isn’t damaged by clashing with other weapons. While that would probably be very useful to an actual soldier, in most fiction it means nothing. Unless rust and battle damage are a major part of the story, being immune to them doesn’t change anything.

So if you’re counting flavor to make your signature weapon cool, remember that it needs to affect the plot in a major way. Perhaps earning their new weapon finally allows the character to hold their own in a fight, like Avatar’s Sokka and his space sword. Alternatively, your hero might be the only character in the story who uses a specific kind of weapon, changing the way they fight against their opponents.

Everyone wants their signature weapon to be cool, and that’s part of the reason why doing so is difficult. Audiences are inured to flaming swords and silver bows because special weapons show up in nearly every story. That doesn’t mean it’s impossible to make yours stand out, just that you’ll need to take special care and always pay attention to the fundamentals. You can add special flourishes after making sure your magic sword matters.

Though this isn’t technically an ability of the shield itself.