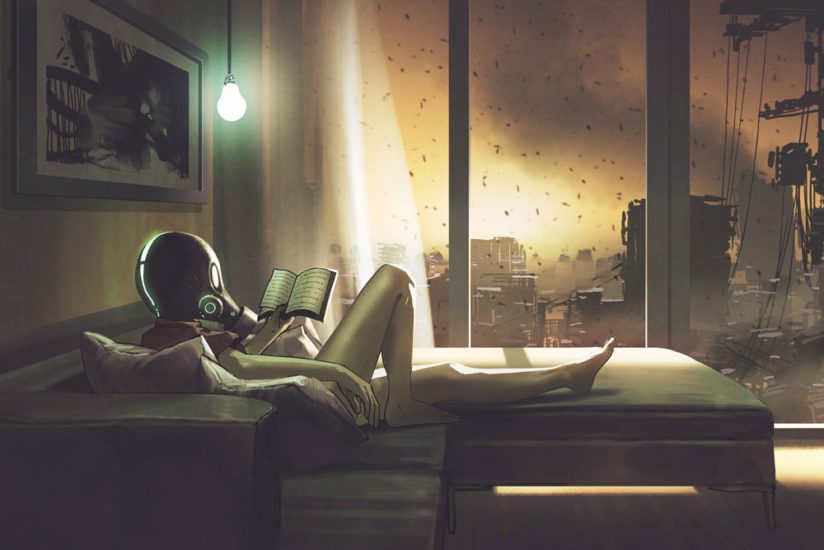 Image by Tithi Laudthong on Shutterstock

We’ve discussed how to entertain your audience with novelty much less than the other ANTS. Since novelty can be generated by anything the audience isn’t used to, it’s hard to get specific about what makes it work. However, the benefit it offers to stories is too large to ignore, and if we don’t discuss it, it becomes easy to neglect. So let’s cover how to set your entire story up for success by using a novel premise.

Think of your premise as a big-picture strategy for creating novelty in your story. You can generate novelty in additional ways, such as beautiful description or a witty narrator, but using a novel premise is especially helpful for several reasons.

So what makes a premise novel?

While that gives storytellers lots of flexibility, it’s hard to come up with ideas using such broad criteria. Below are some common categories for novel premises that can get you started.

Novelty isn’t binary; it falls along a gradient. This means your premise doesn’t have to be completely unique to generate novelty, and it’s helpful to differentiate your premise even if it will never stand out. If your premise isn’t as novel as you’d like, you can help make up for that by implementing it in a unique way.

It’s most essential that whatever you pick is something you’re excited about. Otherwise, you might have a premise you can advertise, but it’s unlikely you’ll deliver the experience your audience is looking for.

The next step is to make sure your premise isn’t left by the wayside. While working in description of your novel story elements is helpful, it isn’t enough. To actually get novelty from the premise during the story, it has to matter throughout. You want a premise that will alter the conflicts in the story so even when the story is at its most intense, the novelty is still there.

That means the premise should affect the problems the hero has to solve and the way the hero solves them. It could create obstacles for the hero, or, alternately, it could give the hero an advantage in surmounting them. Let’s go over this with some example premises.

You also don’t want the protagonist to defeat dream monsters as though they’re not in a dream. So they can’t shoot the nightmare with a gun either. Even transforming into a fantasy knight with a lance may feel disappointing, because that’s from another setting with less novelty.

A ghost easily fits into a fairly familiar setting, so the ghost’s problem doesn’t necessarily have to be that strange. But ideally, being a ghost will still make a difference to the plot. Maybe the story is a murder mystery where the ghost is solving their own murder.

Next, the way a ghost solves this murder should change because they’re a ghost. They might interview other ghosts to solve the murder. The protagonist would naturally have trouble interacting with living people, making it difficult to tell anyone what they found or warn them about the killer. On the plus side, a ghost could easily eavesdrop on the conversations of the living.

A ghost might also need some source of personal danger, and since they can’t die, naturally it will be specific to ghosts. Perhaps the other ghosts they interview quickly pass on, and each time the protagonist is at risk of being dragged to the afterlife with them. The killer might realize one of their victims is haunting the vicinity and hire a exorcist to banish the ghost to hell.

The risk with this premise is making the orcs seem too much like generic heroes and the elves too much like generic villains. It must feel like they are orcs and elves. So the best way to start this plot is with a form of aggression that is uniquely elven. Instead of the elves attacking on horseback and cutting orcs down with their swords, maybe they’ve been poisoning the orcs with the berries from their giant tree. This turns the otherwise-rowdy orcs into peaceful and willing slaves, allowing the elves to maintain a semblance of pacifism.

Then, when the orc clan attacks the elves in response, other species such as humans assume the orcs are the aggressors. If the protagonists have to deal with stereotypes that resemble typical orc depictions, it will matter that they’re orcs.

Altogether, the entire plot of your story doesn’t necessarily have to be about your novel premise, but the premise must significantly alter the way it unfolds. Otherwise, either your premise will fall flat, or your story will be pulled in two different directions.

Dig Into the Details

Now that we’ve covered the big-picture premise and the broad strokes of the story, it’s time for the most important ingredient for novelty: the details. Because any idea will lose its novelty quickly, continually introducing new and fun details is what keeps the novelty of your premise going.

A novel tidbit should itself be unusual and somewhat unexpected, but it should also fit the context you’ve established. If you break theme and introduce something that doesn’t follow the rules of the story you’ve created, it’s more likely to feel bizarre than novel. The premise is a big help here; as long as you pick things that feel natural to it, they’ll probably fit in.

Generally, the novel details of a story come from:

Let’s look at how that might be done with our premise examples.

Dreamscape settings are pretty unusual, so it’s not as important to set this one apart from other dreamscapes. Still, what is a dreamscape, exactly? How does it work? Just answering these questions will help it feel more unique.

Given this framework, it’s time to dream up fun little tidbits that could happen in a scene.

A ghost protagonist who knows they’re a ghost, while still pretty novel, has been done enough that it’s important to make the depiction unique in some way. Since the story will be from the ghost’s perspective, maybe the world looks different. Instead of the ghost seeing their own body as transparent, the living world might look like a transparent and eerily glowing ghost world. Other ghosts, meanwhile, could seem perfectly solid and in vivid color.

This one’s a little tougher, because driving this premise home means invoking the standard orc and elf tropes. So instead of differentiating by making orcs and elves different, the goal is to breathe new life into their depictions by changing mood and context. In addition, this story would be a great place to poke fun at high fantasy in general, adding more novelty in the form of humor.

For the orcs, we might imagine what normal life for an orc from a high fantasy world would look like.

Meanwhile, since elves are depicted as so superior much of the time, their typical characteristics might be repackaged to look less ideal. Unfortunately, making fun of them would reduce their threat level, so let’s make them creepy. The elves will appear peaceful, friendly, and smiling even as they destroy their enemies.

Fun details still need to fit into your plot, but coming up with some early might offer ideas for where your plot could go.

When creating a novel premise, keep it as simple as you can. If it takes a full explanation, it will take more investment for people to appreciate, and it will be harder to sell. If you can explain it in a few words and people think it’s cool, then you have a winner.

How to Write Three Types of Friendship Arcs

Comments on Using Your Story’s Premise to Create Novelty