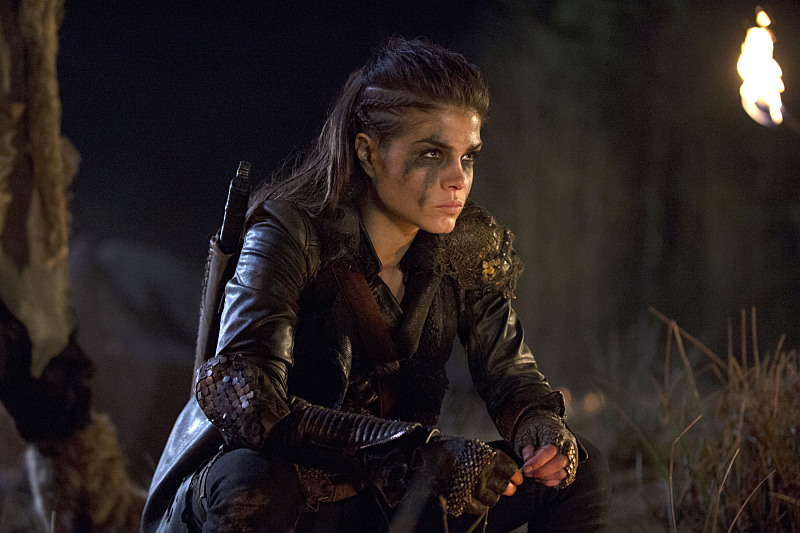 In The 100, Octavia gains the title of "Skairipa," which means "death from above."

Years back, I wrote some rules for using fake words. Some people grumbled that it banned writers from using conlangs (constructed languages) altogether, and that’s not far from the truth. The bottom line is that your conlang won’t give your audience the same joy it gives you. In many cases, sticking your fake language in your story is like subjecting them to a pop-up advertisement. They’re just trying to read or listen* to your story, and your ad is in the way.

Even so, I do think it’s possible to include your conlang without sabotaging your story. If done carefully, it will make the worldbuilding feel more immersive. Give me fifteen minutes, and I’ll show you how to do it.

Don’t Show Off Your Conlang; Teach It

The biggest problem with fake words is that they don’t mean anything to your audience. You might as well take a permanent marker and black them out like your novel has been censored. No one wants to read a bunch of redacted words or listen to a bunch of bleeps. Given that, the solution is simple: make your gibberish mean something. Once your audience genuinely learns a word, they have no reason to be annoyed by it.

Don’t get carried away, though. Your audience didn’t sign up for a language course; they signed up to be entertained. They don’t want to do any work. To be successful, you have to make learning so easy they don’t realize they’re doing it.

That means lowering the bar. Instead of speaking fluent Elvish, how about they learn twenty words instead? By the end of your novel series, they might even string a sentence together! That may not seem like much, but to your audience, twenty words will matter. Those words will stick with them after your story has ended.

To give you examples of carefully teaching words, I’ll use the TV series The 100. The show takes place in a post-apocalyptic future, and many of the characters speak a language called Trigedasleng. While The 100 is told in a visual medium,* the language is carefully taught in a manner very similar to best practices for a written or auditory work (aside from the spelling, which viewers are mostly unaware of). For those interested in seeing Trigedasleng in action, the show is currently available on Netflix.

Make Your Conlang Easy to Learn

The craft of creating languages would be a book in itself, and I wouldn’t know how to write it. But there are some common mistakes that make it harder for storytellers to include their conlang in a constructive way.

Avoiding these pitfalls has the side benefit of making your language more realistic. Real languages are practical for the people who use them, and it turns out that humans have similar associations between meanings and sounds. If the word is soft or harsh in English, it’s probably soft or harsh in other languages too.

Aside from mistakes, you can also make your language easier to learn by making it related to the real one your audience knows. A future setting could have a language that evolved from the current one. A secret underworld could have enough exposure to above-grounders that it borrowed some words along the way.

In The 100, Trigedasleng contains words that sound like English. The word “tri,” pronounced “tree,” means “forest.” The word “Skairipa” is clearly an adaptation of “sky reaper.” If it had been created for a written medium, it might have been spelled “skireepa” to make that clearer.

Use an Ignorant Viewpoint Character

If you do anything else, at best it’ll come off as a contrivance. You’re back at sticking pop-up ads in your story, and worse, you’re creating distance between the viewpoint character and the audience. That can ruin their immersion and reduce their investment in your story.

Once you have your ignorant character, make sure they have a good reason to learn new words. They might need to fit in with the locals, communicate with a barely known race, or decipher some plot-important text.

In Season 1 of The 100, the main cast all speak English like the audience. They’ve been isolated since the apocalypse, but to survive they have to migrate elsewhere. They end up in the territory of a group that speaks primarily Trigedasleng. Those people call themselves Trikru (pronounced “tree crew”). Some members of Trikru know English, allowing the story to move forward without stopping for a language lesson. Even so, understanding Trikru and their culture is vital for the survival of the protagonists.

Choose the Right Words to Teach

After that, choose words or short phrases that are repeated in very specific contexts, without variation. Greetings and prayers are usually the best for this. If your characters always part with the same phrase, it’ll be clear they’re saying goodbye. If they say the same words before they eat, your audience will guess it’s a blessing. These types of words and phrases also feel pretty natural in conlang. Rituals are often spoken reverently in a religious tongue; greetings are more a matter of habit than communication.

You can also teach some words for things your audience already knows, but it will both raise the bar for learning and risk feeling contrived to the audience. Why call something by a fake word when you can use the real one? Choosing words of strong cultural significance or importance to the characters will help with this problem.

The 100 chooses to incorporate tribe names, a couple honorary titles, and a few culturally important phrases. Trigedasleng speakers say goodbye to the recently deceased with “yu gonplei ste odon,” which means “your fight is over.”

To avoid making your story into a classroom while still teaching effectively, you have to go very slowly.

That last part is important – everything you teach to your audience during your story is there on a “use it or lose it” basis. The more often you’ll use your fake words, the easier they are to teach.

This is also why it’s trickier to teach the meaning of names in your story. They may be used a lot, but when they are, their deeper meanings won’t be apparent. The best way to counter this is to make sure the meanings feel significant to the characters or plot. In The 100, the character Octavia gets the previously mentioned title “Skairipa,” which means “death from above.” Calling a protagonist “death from above” is pretty striking. It’s defined in the show several times and then used consistently.

Give yourself a teaching boost by letting the things you teach overlap. Maybe one character’s name means “frozen waters” and another’s means “falling waters.” Repeating words in different phrases, or using common prefixes and suffixes in different words, will help your audience learn. Trigedasleng uses a lot of repeating components; just look at these words: Azgeda, Trigedasleng, Trikru, Skaikru, Skairipa. You might even know what Skaikru means, though I haven’t told you.

Each story can only take so much explanation before it becomes slow and confusing. If you want to include something that requires lots of explanation, simplify wherever you can.

Visual stories have an easier time with fictional languages because they can use subtitles.
It’s based on a book series, but Trigedasleng was created for the show.
And your bad guy language to be guttural, but that’s kinda racist, so maybe don’t do that anyway.

Comments on Using Your Conlang Without Ruining Your Story