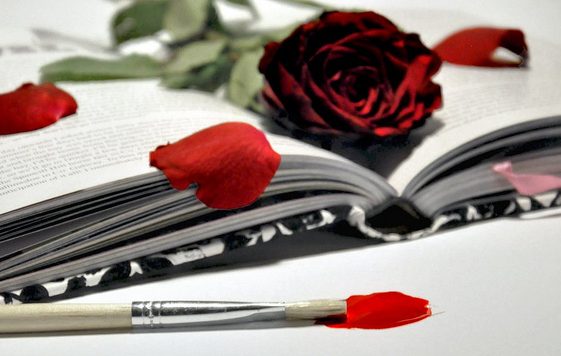 Image by isoteemu used under CC BY 2.0

If you want your words to sound captivating, borrow tricks from a poet. Most fiction writers are familiar with literary devices like metaphor and personification, but it’s less common for storytellers to focus on auditory effects. Working with sound and rhythm can help you convey the mood you want and make your writing stand out.

Making your entire novel sound like poetry may not be feasible, but Shakespeare didn’t put his entire plays in iambic pentameter either. He used it where he thought it was most appropriate. While bursting into rhyme during tense scenes would be jarring, some devices are subtle enough that you can enhance your favorites lines without readers noticing. Poetic devices are especially good for:

If your story is very short, you could use poetic devices throughout. “Okay,” you might say, “but which devices are you talking about?” I’m glad you asked.

Meter is a rhythmic pattern you find in poetry. These patterns are made with two kinds of syllables: stressed and unstressed. In theory, some English syllables are emphasized or stressed when spoken, and the rest aren’t. For instance, some words sound identical except for where the stress is placed:

You can see a big list of these word pairs here.

Unfortunately, the reality is a little murkier. English syllables come with different levels of stress, and the amount of stress changes depending on the English dialect. If you’re not sure whether a syllable is best defined as stressed or unstressed, looking it up in a dictionary often helps. Dictionaries commonly mark stressed syllables with caps, bold, or single quotation marks. Just remember that like “object,” the noun and verb forms may not be stressed in the same way.

To create meter, choose a short pattern of syllables, and repeat it. Some common meters include:

You can see a longer list here. Once you know the meter you want, look up some poems in it. That will give you a better sense of the rhythm. Then you can use meter in most places without making your narrative feel awkward.

Along with repeating a rhythm, you can also repeat specific sounds. This is pretty limiting – most poets wouldn’t repeat the same sound through an entire poem. Instead a sound might be heavily repeated in one line, or two words with similar sounds might be placed close together.

These devices are more obvious than meter. Assonance might go by unnoticed, but alliteration stands out. You can get away with the occasional pair of alliterated words next to each other, but if you start doing it frequently, your readers will notice. Whether or that’s a good thing depends on your story and the lines you’re embellishing.

Consonance and assonance are generally used to create atmosphere and emphasize specific phrases. When they are used heavily, they give words a cheesy or sing-song feel. If a character is reciting a riddle or your story is silly, that’s probably the effect you want. If a sage is giving your protagonist some meaningful advice, steer clear of alliteration in particular.

We’re all familiar with rhyme, but the subtleties often go untaught. To create a perfect rhyme, two words must have different consonant sounds leading matching stressed syllables, optionally followed by matching unstressed syllables. That’s a mouthful, so let me break it down.

Poets have given names to many kinds of partial or imperfect rhymes, but most are very similar to consonance and assonance, and they have a similar effect. Just know that any kind of similarity between words can make lines more lyrical.

Rhyming words aren’t always placed at the end of lines, but when they aren’t, they’re still usually placed at the end of a phrase or sentence clause. They often appear before a comma, a conjunction (and, but, or), or a preposition (in, on, with, at). Example: “I went to town and lost my crown,” and “I was carried away at the break of day.”

You don’t have to follow a formula; feel free to experiment with the sound and placement of your rhymes. Just avoid results that seem accidental. For most auditory effects, accidents are fine, but rhyme is the sledgehammer of literary devices. In fact, rhyme is so noticeable that you can subvert it. Set up an obvious rhyme, and then don’t follow through with the last word. Example: “Let’s go float up high, look down from the clouds.” Keep in mind that some readers will miss your subversion.

Rhyme has limited use in stories, but chances are still good you’ll want it on occasion. Your fictional song lyrics will feel more convincing with some rhymes added in, and your court jester might ad-lib rhymes in every line of dialogue. If you have a good in-story explanation, rhyme away.

You might notice that all of these poetic devices have something in common: repetition. Repetition makes words sound like song. Wield it carefully, and you’ll bring your wordcraft to a new level.

It’s pentameter because the pattern (an iamb) is repeated five times in a line.