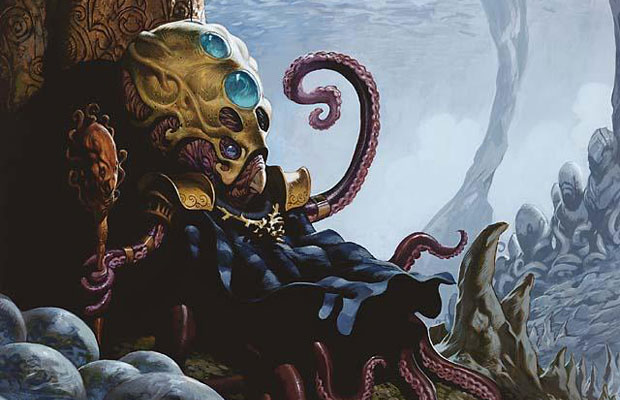 Warlocks occupy a very weird space in 5E’s design. Their early levels, particularly that of the Hexblade subclass, are so powerful that they show up in many high-powered builds in the form of one-to-three level multiclass dips. Beyond that, however, the class’s power is consistently subpar. This is due to a comparatively weak spell list, a paltry number of spell slots,* and the underpowered Mystic Arcanum feature.* As with the ranger I covered earlier, I’d hoped that the new Lurker in the Deep patron would focus on shoring up the class’s high-level deficiencies instead of piling on more low-level power. Let’s see if my wish came true, starting at level 1.

The Lurker in the Deep lets you choose from an expanded list of spells when you learn a warlock spell. The following spells are added to the warlock spell list for you.

While not a stellar selection of spells, the inclusion of Lightning Bolt and Cone of Cold means the Lurker has decent damage options to choose from as they level up. This is not as good as the Fiend Warlock getting Fireball, but it’s a decent starting point for this new subclass.

Level 1 – Grasp of the Deep

At 1st level, you gain the ability to magically summon a spectral tentacle that strikes at your foes. As a bonus action, you create a 10-foot-long tentacle at a point you can see within 60 feet of you. The tentacle lasts for 1 minute or until you use this feature to create another tentacle.

When you create the tentacle, you can make a melee spell attack against a creature within 10 feet of it. On a hit, the target takes 1d8 cold or lightning damage (your choice when it takes the damage) and its speed is reduced by 10 feet until the start of your next turn. When you reach 10th level in this class, the damage dealt by the tentacle increases to 2d8.

As a bonus action on your turn, you can move the tentacle up to 30 feet and repeat the attack. You can summon the tentacle a number of times equal to your Charisma modifier (minimum of once), and you regain all expended uses when you finish a long rest.

I’m down for a water-themed Spiritual Weapon. One of the warlock’s major issues is its lack of spell slots. Spell-like abilities such as this one help remedy that lack. Unfortunately, unlike clerics, warlocks already have a very important use for their bonus action, namely the casting and reapplying of Hex. While this won’t always be a problem, especially against a single large enemy, it does make the warlock tentacle relatively weaker than the cleric spell it’s based on.

Level 1 – Scion of the Deep

At 1st level, your patron accepts you into its inner court of servitors. You can telepathically communicate with any aberration, beast, elemental, or monstrosity that has an innate swimming speed, while it is within 120 feet of you. The creature can understand you and can respond telepathically.

You can now have Aquaman powers about as powerful as those seen in the Super Friends Cartoon. Outside of aquatic campaigns, this ability will see almost no use. Thankfully, the tentacle power is strong enough to prop up the subclass’s first level, because this flavor feature isn’t doing much.

At 6th level, your patron grants you greater abilities. You gain the following benefits:

As with Scion of the Deep, this feature probably won’t see much use outside of an aquatic setting. The ability to breathe and move underwater is situational, with the breathing part being easily replicated by a level three ritual. Resistance to cold damage is more powerful, although not so commonly useful as fire resistance.

At 6th level, the tentacle you create with Grasp of the Deep can defend you and others. When you or a creature you can see takes damage while within 10 feet of the tentacle, you can use your reaction to choose one of those creatures and reduce the damage to the chosen creature by half. After doing so, the tentacle vanishes.

I’m not a huge fan of this feature. Grasp of the Deep is easily the subclass’s most potent feature, one usable up to five times per long rest. Spending one of those charges to reduce one instance of damage does not seem worth it in most situations. Against enemies that have singular powerful attacks, I could see this ability gaining some value. However, most enemies deliver damage through multiple hits, making this ability middling at best.

Starting at 10th level, you can magically draw forth a manifestation of your patron’s insatiable hunger. As an action, choose a point you can see within 60 feet of you. For 1 minute, a translucent maw manifests in a 10-foot radius centered on that point. Each creature in that area when the maw appears must succeed on a Strength saving throw against your spell save DC or be restrained. Any creature that starts its turn in the maw’s area takes 3d6 cold or lightning damage (your choice when it takes the damage). As an action, a restrained creature can repeat the saving throw, ending the restraint on a success. At the start of your turn, if there is a creature in the maw’s area, you gain temporary hit points equal to your warlock level.

Once you use this feature, you can’t do so again until you finish a short or long rest.

The ability to restrain and damage enemies over multiple turns without using the warlock’s concentration or spell slots is theoretically quite good. Unfortunately, I think all the numbers on this ability are severely under-tuned. A ten-foot radius is so small that it’s unlikely this attack will affect more than one enemy, 3d6 damage is lower than the level one Inflict Wounds spell, and because moving through the area doesn’t trigger its effects, people can wander through your Devouring Maw with no repercussions.

Starting at 14th level, you gain the ability to call upon your patron for aid. As an action, you choose a point within 30 feet of you where your patron tears through reality, manifesting a measure of its thalassic grandeur. Choose one of the following effects to issue from this manifestation point. Once you use either effect, you can’t use this feature again until you finish a long rest.

Fury. You can direct a barrage of spectral tentacles to issue forth and strike up to five creatures you can see within 30 feet of the manifestation point. Each target must make a Dexterity saving throw against your spell save DC. On a failed save, the creature takes 6d10 cold or lightning damage (your choice) and is knocked prone. On a successful save, it takes half as much damage and is not knocked prone. The tentacles then vanish.

This feature is… fine, and oddly similar to the Aberrant Mind Sorcerer capstone I reviewed previously. Maybe group teleportation will be a theme in the next book. Teleporting your party is useful, but after a certain point, range stops mattering, as I can’t think of many situations where a party needs to travel 100 miles when time is of the essence. It also has the same problem the sorcerer had: Teleport is a spell. As for the damage, it is once again lackluster. By this point, the simple combination of Eldritch Blast and Hex are dealing 3d10 + 3d6 + 15, which is more damage than this feature.

I had hoped that this subclass would stop focusing so heavily on the warlock’s early levels and instead improve on the class’s weaker late levels. Unfortunately, that is not what I got. While Grasp of the Deep is a cool feature, it’s about the only one I would be happy to have on this list. In its current state, I see this subclass mainly being used as a one-to-three level dip for characters that wouldn’t benefit from the Hexblade subclass but still want the warlock’s incredibly good early-level features.

On the bright side, I think a lot of this subclass’s problems can be remedied with a few simple tweaks. The first change I’d make would be to add in further scaling for Grasp of the Deep. This could take the form of increasing the ability’s damage by 1d8 at levels 5, 11, and 17,* although this would be linked exclusively to warlock levels. If that proved too powerful, the scaling could take place only at levels 11 and 17. Either way, this would ensure the ability keeps up at higher levels and encourage players to stick with the warlock class.

Next, I’d expand the resistances of Fathomless Soul to include cold, fire, and lightning. Cold and lightning are the damage type done by this subclass’s abilities, so being resistant to them makes sense. As for fire, I’m going on Pokémon logic, i.e. water resists fire. Once again, the idea behind these changes is to make warlocks more than a three-level dip for people looking to play powerful characters.

For Guardian Grasp, I’d expand the resistance’s duration from a single damage source to the beginning of the warlock’s next turn. Given the high cost of a Grasp charge, this feature should have a larger payout. Blunting an entire round of damage seems much more commensurate, especially considering the level this feature is acquired at.

For Devouring Maw, there are three changes I’d make. First, I’d increase the damage from 3d6 to 6d6. This means that damage dealt by this feature might actually matter. Second, I’d increase the radius from 10ft to 15ft. This would allow the maw to more reliably affect multiple targets and would make it easier to block chokepoints than at its current size. Finally, I’d expand the activation triggers to include when a creature first enters the ability’s effect. Requiring a creature to start its turn within the ability is both mechanically weak and doesn’t make in-game sense given what’s supposed to be happening when the warlock uses this feature.

Looking at Unleash the Depths, I think this ability needs a bit more than simple tweaks. Instead of a bespoke ability with similar flavor to the earlier Devouring Maw, I would have it build upon the earlier ability. The first step would be delete the entire teleportation mode of the ability, because it’s a confusing addition and the effect is easily accessible to most parties at this level if desired. With that out of the way, I’d change the remaining damage mode to enhance Devouring Maw instead of its current effect. The ability would get a second use per long rest, its damage would increase from 6d6 to 10d6, and any creature that fails its saving throw would be frightened while it remained within the effect.

With that, we’re done with the warlock, and next week we’ll take a look at the last of this round of UA subclasses with the wizard.

Refreshing on short rest is not enough to keep up.
Warlocks get this instead of spells level six through nine.
This is also how cantrips scale.

Comments on Unearthed Arcana Review: Lurker From the Deep Warlock