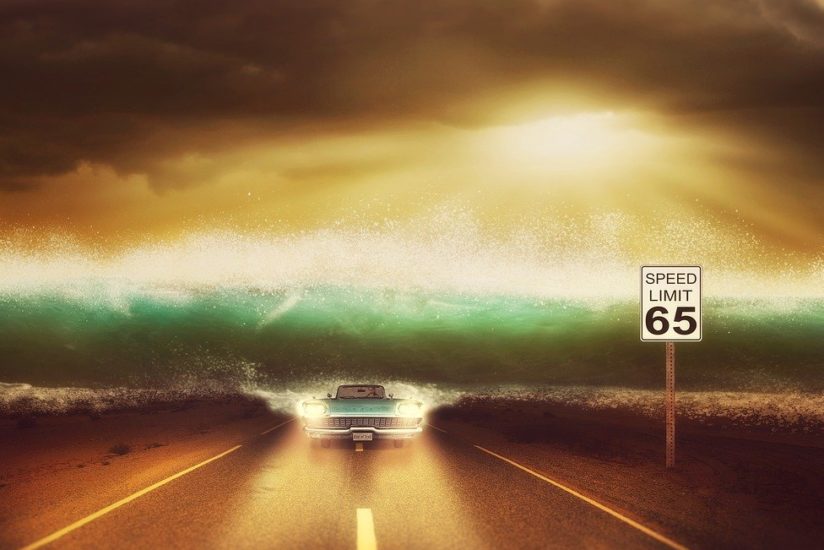 As authors, we want our stories to be brimming with tension. To do this, we fill them with alien invasions, evil politicians, and scheming relatives who want to throw the protagonist out on their ear. But sometimes we have all those things, and beta readers still report that the story isn’t pulling them in, or if they’re more blunt, that it’s boring. When this happens, there’s a good chance we’re using too much of what we call calamity.

That’s right, it’s time for New Terms With Mythcreants, the vocabulary sensation that’s sweeping the nation!* “Calamity” is the term I use to describe situations where something bad is happening, but the protagonists can’t do anything about it. Even if they try, there’s no conceivable way to succeed.

For example, let’s say there’s an alien attack in your story. That sounds like automatic tension, but it won’t be tense if you only treat it as calamity. For instance, if the aliens bomb every major human city before anyone can react, the outcome of that attack is never in doubt. Or let’s say your hero is a soldier fighting this war, but you’ve specifically narrated that Earth weapons have no effect on the aliens. Because there’s no chance of victory, no matter how many clips the hero goes through, that’s also calamity.

Calamity also appears in less violent situations. Your hero might get home to discover the locks changed and all their stuff piled on the sidewalk, thanks to their antagonistic landlord. If the hero can’t do anything about it, that’s calamity. On the other hand, if they are threatened with eviction but can contest it in court and potentially stay in their apartment, that wouldn’t be calamity even if the chance is slim.

Likewise, it’s not calamity if the hero has a chance to do something but fails. The court case might be thrown out, or the hero might miss their one-in-a-million shot against the alien mothership.* The point is that the outcome could have been changed.

You can also have internal calamity, something I call “angst.”* This is when the protagonist spends an extended period feeling bad about something but those feelings don’t motivate any mental or physical action. If the protagonist feels bad about a breakup and they try to cheer themself up or otherwise process their feelings, there’s uncertainty about whether they will succeed or fail. If they simply experience the bad feeling, that’s angst.

When Is Calamity a Problem?

Calamity isn’t automatically bad for stories, but it becomes a problem when authors use it instead of cultivating tension. Tension is derived from the uncertainty of whether bad things will happen or not. While making bad things more likely will usually raise tension, if that likelihood hits the 100% mark, it actually takes tension away. At that point, there’s no suspense, just inevitable doom and gloom.

Sometimes, this is really easy to spot. In The Name of the Wind, we spend several chapters getting a surprisingly detailed summary of Kvothe’s time as a street urchin after his family is murdered by a plot device. This isn’t a struggle for survival, because Kvothe isn’t really doing anything; he’s simply experiencing various privations like a lack of food and shelter. Tension is near zero for this entire section, and it’s especially noticeable because Kvothe is such a hypercompetent character in every other scene, so it’s jarring for him to spend so long doing nothing.* But even for a more grounded character, these chapters would be boring thanks to their lack of tension.

In other cases, calamity is better at disguising itself. Battle scenes in particular usually have tension until the author makes it clear that Team Good will get squished no matter what. That’s what happens in the climax of His Majesty’s Dragon, where author Naomi Novik specifically tells us that Temeraire and his crew have no chance to stop the oncoming French invasion. We’d have given them the benefit of the doubt even with long odds, but saying it out loud robs the scene of tension. Instead, we have to watch the French act out their preordained victory. Eventually, Temeraire manifests a new power that turns the tide of battle, but rather than being cool and satisfying, this twist feels inevitable.

This can also happen with angst, as in the strange middle section of The Calculating Stars. After escaping death in an asteroid impact, but before beginning the story’s political conflict, the protagonist Elma spends several chapters feeling terrible about all the death caused by the aforementioned asteroid. While it’s certainly realistic for Elma to feel awful in this situation, it doesn’t change the fact that nothing is at stake. Nothing Elma does has the potential to change her state of mind; we just have to wait until that section is over and it’s time to start the next conflict. In a book that’s otherwise great at cultivating tension, this section sticks out as weirdly boring.

Can Tension Come From Calamity?

So you’re staring down the barrel of a story full of calamity, and it’s boring your readers to tears. Should you abandon all hope and flee into the wilderness? No! At least, not over this particular problem. In general, I’m not the boss of your wilderness antics.

In most cases, calamity issues are very easy to fix once you’re aware of them. The most straightforward option is to turn the calamity into a tense conflict by adding some uncertainty. If the hero’s actions can theoretically sway the outcome, even with a slim chance, the story will be tense instead of gloomy. That solution is perfect for a story like His Majesty’s Dragon, which already has all the required setup. If Temeraire and his crew had gone into battle with a desperate plan, there would have been tension for days. Then the plan could have failed, leaving our heroes to be saved by the twist of Temeraire’s new power.

The Calculating Stars could also benefit from this option, but it would be more complicated. The main point of that section seems to be exploring Elma’s feeling of helplessness at the disaster unfolding around her, which we can’t really have if she’s doing something cool like designing anti-asteroid defenses or flying refugees to safety. Instead, Elma could have had a smaller-scale conflict about helping an injured friend or an internal arc about finding peace in the face of natural disaster. Internal arcs are subtle, but they work the same way external arcs do: with a problem the protagonist will struggle to solve before it reaches the point of no return.

In other cases, it may be better to reduce the amount of calamity or simply cut it entirely. Kvothe’s street-urchin phase is long enough that adding tense conflict would make it a significant percentage of the book, which the author probably didn’t want. At the same time, this period doesn’t have much impact on Kvothe’s character, as he’s primarily motivated by the earlier death of his family. All the story really needs is a short period of grief as Kvothe processes what happened; then it can move on to the rest of the plot.

When Is Calamity Good?

With all the issues calamity causes, you might assume that it’s always bad and should be excised from all stories forever. Fortunately, this is not the case. Instead, the key lies in understanding what calamity can do to help your story.

Even if the greater calamity is too big to do anything about, it generally creates smaller problems that can be addressed. The Calculating Stars presents a master class in this tactic with its opening chapters: Elma can’t stop the asteroid, but now that it’s hit, she and her husband have to survive the aftermath. This requires finding shelter from the initial explosion, driving on debris-strewn roads, and getting their small plane off the ground before the whole area is engulfed in fire.

You’d be surprised how many types of stories this works for. If your hero is thrown out of their home, that can start a conflict of finding somewhere to crash for the night. If the story begins with the hero’s spouse leaving them, that can start an internal arc of learning to be emotionally complete without a romantic partner. The possibilities for tension are endless!

Calamity can also be used as a consequence of resolving a conflict, either because the hero failed or because they had to sacrifice something in order to win. So long as the calamity doesn’t go on long enough to become its own section, this will feel like a natural part of the story’s pacing.

Darker stories are especially fond of this tactic, as it allows them to drive home whatever horrors tickle the author’s fancy. The Fifth Season, for instance, has a section where the protagonist tries to protect her village from the anti-mage authorities.* She faces long odds, which are great for creating tension because there’s still a slim possibility that she might win. When she fails, her village is destroyed as a consequence. Brutal, but effective.

The difference between calamity and tension isn’t that hard to learn, but it’s one of the most common lessons I give clients in content editing. Many new writers simply aren’t taught that uncertainty is what makes stories exciting, so they just throw bad things at the protagonist and hope something will stick. Once they know better, they can make their stories engaging without making them so grimdark.

Chris usually comes up with our new terms, but this one is entirely from yours truly.
Unless it’s Discworld, where it’s impossible for a one-in-a-million shot to miss.
The word “angst” often has a negative connotation, but it’s actually quality-neutral.
The justification that his family was killed doesn’t change how boring this section is, nor does it explain why the section goes on for years.
If you’ve read the book, this is in the middle timeline, when she’s still going by Syenite.