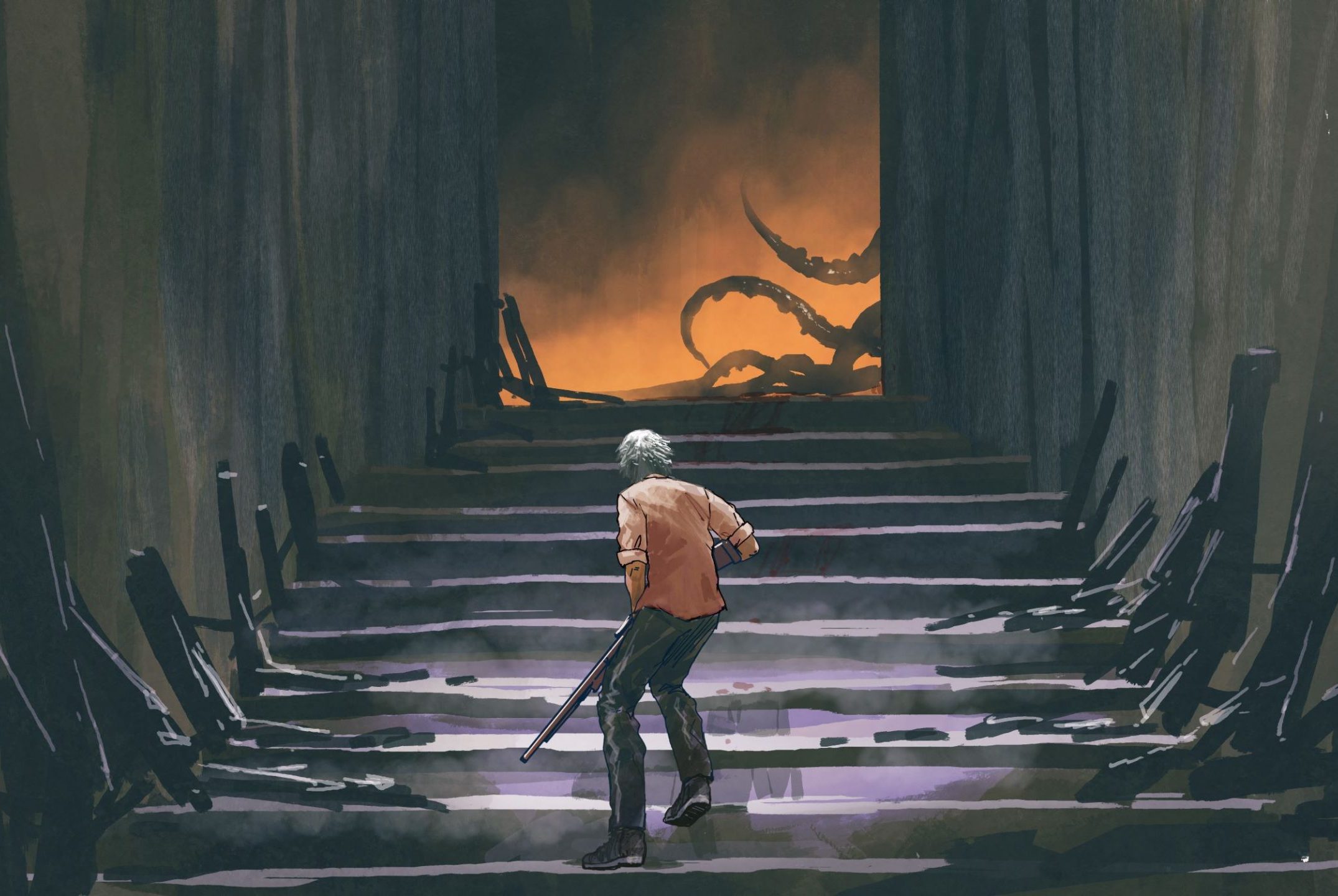 In 2014, I wrote a primer on the basics of conflict, with a few notes on tension thrown in. Whereas conflict is easy to spot and a central topic of most writing advice, tension is subtle and rarely defined even when it is mentioned. Given this, it’s unsurprising that I considered conflict the primary driver of stories and tension a subtle manifestation of it.

As my understanding grew, conflict and tension traded places. I now consider tension to be the primary driver of a story and conflict an essential method of bringing tension to the forefront. Given that, an update to this primer has been long overdue. While I don’t want to leave outdated information sitting around, you can read the 2014 version via PDF.

Without Tension, There Is No Story

In my early blogging years, I spent lots of time contemplating the difference between describing random events and telling a story. When you don’t know anything about stories, it’s easy to think that any retelling of real or fictional events qualifies as one. But people subconsciously gravitate toward a specific structure for the events they retell, one that makes the retelling more entertaining and meaningful. When that structure is gone altogether, events don’t feel like a story; they feel utterly pointless.

I now know what defines a story is tension: a feeling of worry or suspense. When humans experience tension, they focus on its source, drawing them into the story. When tension is high, we call a story “gripping,” but even low levels of tension have a substantial impact.

A story begins in earnest when it creates the right conditions for tension. This is often referred to as a “hook” because it snags readers and drags them in. However, I usually refer to it as the story’s “problem.” What do people worry about? Problems. You might also call it a “question,” since tension requires uncertainty. Some sources of writing advice refer to a story’s opening problem or hook as “the dramatic question.”

A story ends when that same tension is finally released. In most cases, this means the problem has been solved. Other times, it isn’t solved, but the worst has already happened. We can’t worry about a person dying if that person is already dead. Releasing tension allows the story’s audience to finally relax and let the story go.

How to Create Tension

While I often say that tension is generated by problems, that leaves out critical details. Generating tension depends on several factors, some of which are difficult to establish and easy to disrupt.

People worry about bad things happening. The worse those things are, the more they’ll worry. If they’re worried about dying, that’s obviously more intense than worrying about being late to work.

In more traditional writing advice lingo, consequences would be referred to as the stakes of a conflict. In other words, what’s at stake in this situation? The respect of your boss or your very life? Stakes can also involve rewards the protagonist might gain, but these positive consequences don’t create tension and aren’t as compelling to audiences. That is, unless they solve a tense problem.

For instance, let’s say the stakes are whether or not the protagonist gets a raise at work. If the protagonist already has enough money, audiences won’t care about this. But if you specify that the protagonist is eating ramen and can’t make next month’s rent, now the raise is compelling because it prevents bad things from happening. The same goes for character and relationship problems. If you want to make the protagonist’s desire to befriend someone compelling, first establish that they are lonely or have another problem that this potential friendship could solve.

Just as in those examples above, in many cases a problem’s consequences could use further development or need to be communicated more clearly. What’s so bad about being late to work? Has the protagonist already gotten a final warning about tardiness? That means the real consequence is getting fired, which will create more tension than the vague threat of walking in the door a couple minutes late.

Most people aren’t worried about dropping dead in the next hour, because that’s so unlikely. Tension requires uncertainty over whether protagonists will face consequences, and that means avoiding consequences can’t be easy.

Many details influence an audience’s perception of how likely the protagonist is to fail and suffer for it:

If the likelihood of failure feels too low at any point during the story, the tension could drop, resulting in a bored audience. The most common culprits are a protagonist that is too powerful, an antagonist that looks incompetent, or a timeline that is too long. Let’s take a closer look at that last one.

Just like most people don’t worry about dropping dead in the next hour, most people aren’t constantly worrying about their eventual death.* This means that to generate tension, problems need some level of urgency.

For one thing, urgency affects the perceived likelihood of solving the problem, as mentioned above. Even a problem that’s nearly impossible to solve looks surmountable if protagonists have enough time to come up with a solution. For another, people just don’t worry that much about problems that aren’t immediate. If they did, we would have already addressed climate change instead of dragging our feet.

While it’s easy to think of urgency as a clock ticking down until a bomb explodes, it also applies to consequences that are ongoing. If the vampire antagonist kills one person every night, stopping them is definitely urgent. Similarly, if the protagonist is walking through a cursed forest, and a demon could jump out of the trees and devour them at any time, that’s urgent too. An unhappy protagonist is also experiencing an ongoing consequence, even though that consequence generates much less tension.

Conversely, when lots of in-story time passes without anything bad happening, that suggests problems are not urgent.

If I told you someone was dying, you’d probably be concerned about them. But let’s say this someone does really evil things; as a completely made-up example, we’ll say he takes children away from their parents and puts them in cages. Let’s also say that this hypothetical someone contracted a deadly illness recently. Did you worry he would die?

This is where a character’s likability comes in. We have many articles discussing likability; I recommend starting with these twelve likable traits. Audiences usually also become more attached over time as they get to know your character. Obscuring important information about your character, such as what’s motivating them, is likely to reduce attachment.

How Conflict Brings Tension to Life

Let’s say you have one story that opens with a character dying of a fatal illness, and another story that opens as a character realizes they have a flat tire that will make them late to work. You’ve checked off all the requirements for tension. Your stories have started, but how do you fill them up? You depict conflicts.

A conflict is a protagonist’s struggle to accomplish a goal despite the obstacles standing in their way. Generally, their goal is to solve a tension-inducing problem or complete one step toward solving it. In a story opening with someone dying from illness, conflicts might include:

In a story opening with a flat tire that could make the protagonist late, conflicts might include:

Watching the protagonist struggle makes a tension-inducing problem more riveting. The problem feels more immediate, and every action the protagonist takes could determine whether or not they face consequences. For this to work, the audience should feel uncertain about what will happen. Only after the conflict comes to a head will the audience know if the protagonist has succeeded or failed at their objective.

Conflicts like these are ideally depicted in detailed, real-time scenes, turning the tension in the story into engaging entertainment. This is why, generally, some form of conflict should appear in every scene. However, in quieter scenes the protagonist may simply be struggling to get some sleep.

Conflicts with no tension behind them provide no value. A couple unnamed soldiers fighting in the background will not leave the audience on the edge of their seats. This is why adding fight scenes to your story is not enough to engage audiences, particularly in narrated mediums. Those fights have to matter. And as long as you have conflicts that matter, fight scenes are unnecessary.

More Tension Is Usually, but Not Always, Better

Tension is engaging, but it’s also a bit stressful. People have different levels of sensitivity to tension-inducing story elements, and some people are more interested in feeling stress than others. On top of that, different stories also call for different levels of tension depending on their genre and subject matter. Genres like horror and suspense thrillers obviously call for lots of tension, but children’s stories and personal dramas may not have as much.

The key is to ensure:

Most storytellers have to work on adding more tension and ensuring that their scenes are full of conflict.

Creating tense conflicts requires making everything difficult for your protagonist and showing how they deal with that adversity. The harder they have to work to earn a happy ending, the more satisfying it will be when they finally get there.