Tying Your Plot Together 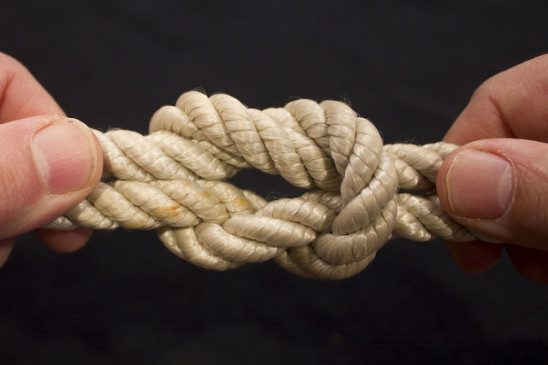 You’ve finally finished the draft of your magnum opus. You’ve developed engaging characters and placed them in a vibrant setting. You’ve filled each scene with conflict, tension, and chocolate. But something’s wrong. The friends who’ve read it tell you that while each scene is entertaining, the story as a whole isn’t gripping. It just doesn’t click together like a good Hollywood flick.

Don’t despair. You can still turn your bland soufflé into a mouth-watering mound of temptation. Just follow this recipe:

Identify the End Point for Your Story

First, you need to find the glue that holds your plot together. A great way to do this is to find the story’s goal, or end point. What needs to happen for the story to feel resolved? If you’re writing in a genre that is plot-specific, finding your end point should be easy:

If your genre doesn’t fill in the answer for you, Orson Scott Card’s MICE classifications could also help:

Otherwise, take a hard look at your story and decide what conflict – whether it’s the end of the world, a battle of conscience, or a shortage of toilet paper – is the most important. When that conflict is done, so is your story. If your conflict appears to change partway through, look for the thread that unites everything. What makes it one story, and not several?

Your audience needs to pick up on the end point you’ve chosen when they read your story. You don’t need to outright tell them. Just show them a perplexing puzzle or a desperate need at the beginning of your story, and they will expect an end that addresses it. That’s why Card mentions the beginning in his MICE scheme; it sets audience expectations. You don’t have to follow his formula, just make sure the hint about your end point comes across to your readers.

You have an end point, and your audience knows what that end point is. Now it’s time to put a nifty technique created by Brandon Sanderson to work. First, create a list of signposts that will give your readers a sense of getting closer or farther away from the story’s goal. These markers will give your plot motion and keep your readers invested in the outcome.

Again, your genre might provide all the ideas you need for your signposts:

Once you’ve gotten a good list of markers, you’re ready for the tricky part: getting your events in line. Every event should have a marker. As the story progresses, make your markers more dramatic to build toward the finale. Instead of signaling that your hero is about to fail at the story’s goal, have her actually fail, and then completely recover during the climax.

Here’s a few more tricks that will help you ramp it up:

Finding the end point and making signposts may be easy for simple stories, but naturally, you’ve stuffed your magnum opus with multiple complex themes and a large cast of characters.

Many stories have multiple plot strands – such as “defeat big bad”, “solve mystery”, and “get the guy.” Each of these threads has its own end point, and the more end points you have, the trickier it is it to keep your story together. In this case, make the events in your story function as markers for multiple plot strands. If the love birds head out to defeat the big bad, but then get into a fight which foils their attack, that’s two for one. Just don’t force it, or you could end up with scenes that are too elaborate for belief.

Regardless of how many plot strands you have, choose one strand that’s the most important. When it isn’t possible to combine markers into the same scene, prioritize your main end point over the others. Don’t abandon it to investigate side plots for more than brief periods in your narrative.

If you have more than one viewpoint character, choose whether they have the same or opposing goals. If it’s the same, they can push each other closer to the end point:

If its opposing, they can push each other away:

Or Sally can convert Harry with the power of love, aligning their goals, yadda yadda.

If your viewpoint characters have unrelated goals, they’ll need a good reason to stick together. A great example is Jack Sparrow and Will Turner in Pirates of the Caribbean. Jack wants his ship back and Will wants to rescue the damsel on that ship. They have the same enemy, and therefore a reason to team up. When we spend time with Will, we can also see how Jack is doing on his quest.

If your viewpoint characters are not interacting with one another and they don’t have goals that complement or conflict, make the divorce official and give each of them their own book. If you are attached to the story the way it is, just say it’s a temporary break. The POV characters just need a little space to reevaluate what they want from their story. If they don’t like being the star of their own book, they can always move back in with one another.

While you’re putting forth your valiant effort to tie your events together, you’ll probably find some that have strayed too far and have to be deleted. That’s hard for a lot of writers. However, once you’re done, you’ll find your story is not just more gripping, but also more meaningful. That’s because you’ve strengthened the parts that are important, and stripped the distractions away, creating a tight story that won’t fall apart.