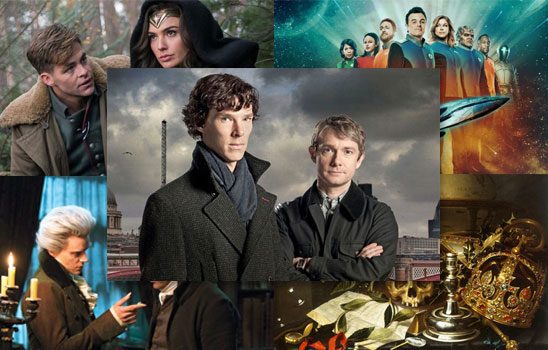 Congratulations! You survived 2017. To serve your holiday time-wasting needs, here’s our most popular posts of the year. Like last year, the three winners were all on the topic of social justice. In these posts, we encourage authors to envision the world they want to see. Books will not change the world in a day, but they remain a powerful tool.

If you need a break from the long march of social justice, we’ve got plenty of craft focused posts as well. This year, our readers were particularly fond of magic and romance, two subjects that are as tricky as they are rewarding. We hope you enjoy our work as you brace for 2018.

Six Signs Your Story Is Queerphobic

Most storytellers know not to use blatant stereotypes these days, and yet queerphobia persists. To prevent these toxic messages from creeping into our work, we have to search for queerphobic tropes and remove them from our stories. Read more »

Six Misogynistic Messages From The Orville

The Orville has a lot of problems, but most of them pale in comparison to the show’s biggest flaw: misogyny. While most speculative fiction is lurching toward better treatment of women, The Orville is here to remind us exactly what we need to avoid. Read more »

Five Signs Your Story Is Transphobic

It’s time for a look at the most insidious messages targeting trans people. To improve how our stories treat trans people, we need to consider not only trans women and trans men, but the entire gender spectrum. That includes people who … Read more »

Romance is a difficult genre to write in. Audiences are very particular when it comes to romance, and it’s easy to fall afoul of their expectations. To make sure your story avoids this unenviable fate, beware of these common mistakes. Read more »

How to Create an Eclectic Magic System

A magic system is rational if it follows a consistent set of metaphysical laws. This consistency prevents plot holes, reduces the need for foreshadowing, and makes magic feel less contrived. Unfortunately, some magic systems are easier to rationalize than others. Read more »

While incompetence is the villain’s bugbear, boredom is the death knell of a protagonist. A protagonist must carry the audience through the story. If the main character is boring, it can damage the story beyond repair. Read more »

When Dark and Gritty Is Just Exploitation

­Some weeks ago, the makers of the Game of Thrones TV series, Benioff and Weiss, announced their next project. Titled Confederate, it will feature an alternate-history US where the South won the Civil War and slavery is still legal. In response, many social justice advocates … read more »

Seven Ways to Bring Characters Together

You have a character that’s made from oozing lava, and another that’s a rolling snowball. They’ll make a great lava-snow duo, but right now they won’t so much as say hi. Don’t worry, storytellers have many tried-and-true plot devices for bringing characters from different walks of life … read more »

We all know about magic items so powerful they damage the plot. Take time turners and liquid luck potions from Harry Potter. Why not go back in time and stop Tom Riddle from ever becoming the Dark Lord? This kind of overpowered item isn’t confined to Rowling’s work. Read more »

If a story’s central problem is weak or its focus meandering, boredom ensues. Read more »