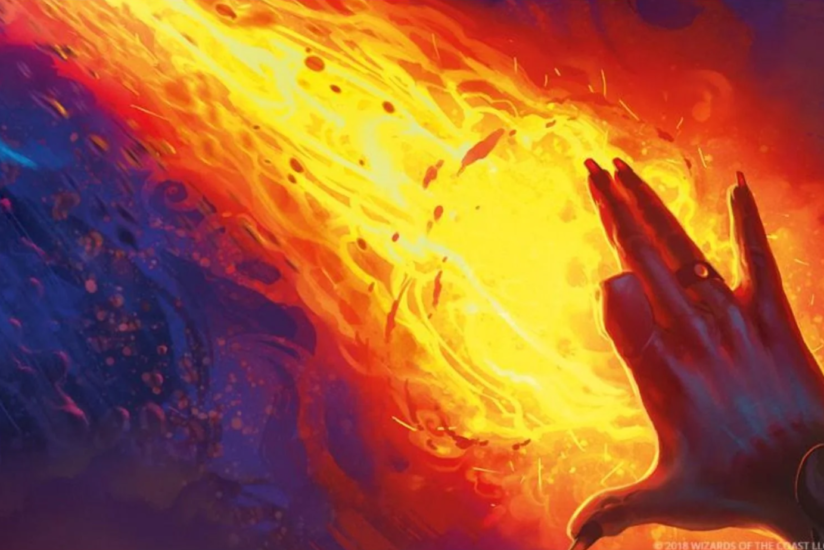 It’s common knowledge that spells are usually the strongest player options in 5th Edition Dungeons and Dragons. They offer both single and multitarget damage, while also offering unparalleled control and utility options. However, just because spells are the best doesn’t mean all spells are created equal. On an individual basis, a spell’s quality can range from campaign ending to completely useless. In this series, I’m covering the best five spells at each level, starting with cantrips.

You point at one creature you can see within range, and the sound of a dolorous bell fills the air around it for a moment. The target must succeed on a Wisdom saving throw or take 1d8 necrotic damage. If the target is missing any of its hit points, it instead takes 1d12 necrotic damage.

One of the main uses for cantrips is being the basic attack for caster characters. Sadly, most of these cantrips aren’t very good damage sources.* Of these subpar sources, Toll the Dead is the strongest option available. The reason behind this strength is simple: Toll rolls the largest dice. As long as the target is damaged, this spell deals d12 damage dice.*

The builds that benefit the most from this cantrip are wizards and clerics. Prior to Toll’s introduction in Xanathar’s, wizards were stuck with the d10 Firebolt, and clerics with the even-worse d8 Sacred Flame. Death clerics in particular benefit as now they can double up on Toll casts by using their 1st-level Reaper feature. Before Toll, the only cantrip that could do this was the d8 Chill Touch. If you need a damage cantrip and aren’t a warlock, Toll is your best choice. Fifth place.

You touch one object that is no larger than 10 feet in any dimension. Until the spell ends, the object sheds bright light in a 20-foot radius and dim light for an additional 20 feet. The light can be colored as you like. Completely covering the object with something opaque blocks the light. The spell ends if you cast it again or dismiss it as an action.

If you target an object held or worn by a hostile creature, that creature must succeed on a Dexterity saving throw to avoid the spell.

Darkvision is so common in 5E that it can often feel like light sources aren’t needed at all. However, for those without such a feature, the penalties for operating in low light and darkness are steep. Complete darkness inflicts the blind condition, and low light reduces a creature’s passive perception by 5. Thankfully, the Light cantrip is here to fix this problem.

The strongest ancestry this applies to is the variant human, but other strong options like halflings and aarakocra benefit as well. Any ancestry without darkvision or a way to cast Light needs some way to see in the often-dark areas 5E takes place in. These alternative ways include the magic item Goggles of Night, which you can’t guarantee will drop, or something like a torch or lantern. These mundane methods suffer from requiring a hand to use, severely limiting what weapon, shield, or spell combination a character can employ if they also want to see. This cantrip lights the way to fourth place.

You touch one willing creature. Once before the spell ends, the target can roll a d4 and add the number rolled to one saving throw of its choice. It can roll the die before or after making the saving throw. The spell then ends.

This entry is one I see most often ignored on other “best of” lists, and I’m not sure why. In noncombat situations, Resistance equals a free 2.5 average increase to every save a character has. This is because, when not limited by combat actions, there is nothing to stop a character from casting Resistance every minute to augment their next save.

From dodging falling rocks to resisting a poison dart trap, there are plenty of saves made in noncombat situations. This spell even has some limited uses in combat, as you might make a save in the first round before you would drop concentration on Resistance to cast something else. This cantrip does clash with other spells maintained between fights like Spirit Guardians or Darkness, but for anyone not already using their concentration, this spell should always be in use. Just couldn’t resist giving this spell third place.

You touch one willing creature. Once before the spell ends, the target can roll a d4 and add the number rolled to one ability check of its choice. It can roll the die before or after making the ability check. The spell then ends.

Continuing the string of noncombat cantrips, we get to one of the most ubiquitous cantrips: Guidance. What makes this cantrip so powerful is that most ability checks are made in situations where casting a simple cantrip is easily done. This means that a single Guidance caster can add an average of 2.5 to every ability check made by the entire party.

Some common rolls that can almost always benefit from Guidance include Perception or Investigation checks made to search a room, Survival or Nature checks to track a target, Stealth checks, and Arcana checks, to name a few. Guidance can even be used on social rolls, although depending on the situation, the GM might rule that casting a spell while trying to talk to someone is a nonstarter. If Guidance had any real combat uses it probably would have made first place, but for now it places second.

A beam of crackling energy streaks toward a creature within range. Make a ranged spell attack against the target. On a hit, the target takes 1d10 force damage.

The spell creates more than one beam when you reach higher levels: two beams at 5th level, three beams at 11th level, and four beams at 17th level. You can direct the beams at the same target or at different ones. Make a separate attack roll for each beam.

I doubt many are surprised to see Eldritch Blast take the top spot on this list. The cantrip is famous* for its outsized damage output and flexibility compared to other cantrips. Be aware this ranking does include the impact warlock invocations have on the spell. Without those improvements, Eldritch Blast is just another damage cantrip and probably wouldn’t make this list at all.

On a warlock, however, there are all sort of invocations poised to propel this cantrip to the top competition. Agonizing Blast ups the cantrip’s damage while Repelling Blast and Grasp of Hadar allow Eldritch Blast to push and pull the target, granting impressive battlefield control. Finally, the speed reduction from Lance of Lethargy and range increase of Eldritch Spear can ensure that many monsters will never have enough movement to threaten you.

Alongside this flexibility is how little build investment is needed to access the spell. For the low price of two warlock levels, any charisma build gains access to Eldritch Blast and two invocations to customize its output. While this damage won’t win any awards when compared to optimized damage dealers, it’s a great basic option for a build that lacks something solid to do between their powerful, resource-intensive abilities. Eldritch Blast also serves as a strong ranged option for builds like the Hexadin,* which normally lack one. First place goes to the cantrip with the class features.

That wraps up cantrips. Next time, we dive into 1st-level spells to determine which reaction reigns supreme.

Comments on The Five Best Cantrips of D&D 5E