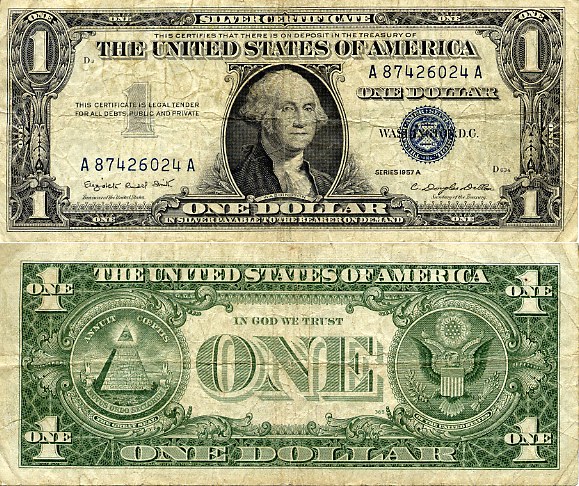 Step right up, folks, just 5,414.3 gold pieces and this marvelous short sword of +1 Monetary Discussion can be yours! That’s right, it’s time to talk about the mechanics of money in roleplaying games. This is something that has been a thorn in the side of game designers and players for a long time. Unless you’re playing in a Star Trek style post currency utopia, money is going to be important, but how should it be represented? A number of different approaches have been tried over the years, all with their own pros and cons.

For a long time, this has been the default method. Whatever money your character has is recorded on your sheet. Any additions are the result of money found or earned in play, and reductions are made each time your character needs to buy things. D&D still uses this approach, as do a myriad of other systems. The only problem is that it’s a terrible way to do things.

First of all, it’s a pain in the ass. Be honest here, how many of you actually deduct money every time your character needs to buy a meal or rest at an inn? Many players simply don’t bother, only recording the larger purchases, like that +1 sword I just sold you.

Even if the players are extremely diligent about recording their every purchase, coin counting puts an undue hardship on the GM. Suddenly, they have to come up with prices for every single thing the players might want to buy. Even D&D, with its pages and pages of miscellaneous items, can’t cover everything. A lot of systems don’t even try. Ask me about trying to come up with prices for Legend of the Five Rings some time.

Finally, coin counting necessitates a very boring economic system within the game universe. When was the last time you remember electrum coming up in a game of D&D? Most groups tend to forget it exists because it breaks the     1 gold = 10 silver = 100 copper system everyone is comfortable with. In order for this to work with most groups, the currency must always be in base ten, and it must be universal. No one wants to check the exchange rates of silver pieces to wooden nickels when they cross the border.

This problem is all too clear when existing settings are adapted to roleplaying games. The Firefly system has a very complex currency model, and it is a nightmare to keep track of at the table. My group played Riddle of Steel a few months back, and it took us all of ten minutes to decide we’d go with the base 10 model, no matter what it said in the book.

The rub is that many systems are dependent on coin counting for balance. Gear is a huge part of games like D&D, and monetary costs are one of the only ways to make sure characters have the right amount for their level. Groups can’t adopt a “have whatever makes sense” attitude on money, because then all balance is thrown out the window. This applies to modern games too. Being able to afford a better bulletproof vest in Shadowrun can make the difference between life and death for your character.

Coin counting can work for post-apocalyptic settings. In these games, shortages of wealth and supplies are a very important part of the experience, and it actually makes sense to keep track of every spare bottle cap you find. Even then, the bookkeeping can get tiring after a while, which is why I would recommend something more like…

White Wolf’s system of choice has an interesting method of dealing with money, and it’s unique so far as I can tell. Characters are assumed to be able to afford all the basics of a modern life: a place to live, cell phone, clothes, maybe a beat up car. If the character wants to afford more, they need to purchase the Resource merit, which is ranked from 1 to 5. Items judged to be useful in the game, such as guns, are priced on the same 1 to 5 scale. Characters may purchase one or two items with costs equal to their ranks in Resources each month, or a greater number of cheaper items.

This certainly pares down gear purchases to a manageable level, and eliminates entirely the need to keep track of how much currency your character has on them. It meshes fairly well with the Storytelling system’s abstract view of gear, where one rifle or sword is pretty much the same as another.

Unfortunately, there are still a host of problems. First and foremost, there are no rules whatsoever for what happens when a character tries to purchase something above their normal price range. None. So far as I can tell, any character who tries simply finds an invisible wall blocking their path to the checkout counter.

Beyond that, the resource merit is not an integral part of character creation. It’s very easy to create a someone you thought was a wealthy businesswoman, only to find that you didn’t take any ranks in the correct merit, and all your dreams were for naught. The game also fails to recognize that it’s extremely unlikely a character could get by in the modern world with no spending money at all, something that is entirely possible without the Resources merit.

The Storytelling method is certainly a step in the right direction, but it feels a lot like a placeholder on the way to…

This is an idea I’m excited to see popping up more and more, most notably in my go-to system, Burning Wheel. With this method, a character’s financial ability is listed as a skill alongside their ability to say, swing a sword. When you want to purchase something, roll that stat and see what you get.

This is great because it allows purchasing to be saved for when it’s dramatically interesting, like any other roll. Players don’t need to roll for buying a hamburger in the same way they don’t need to roll for getting out of bed. Instead, they roll for chartering a transport off Tatooine. Actual currency exists only as flavor. There is no need to keep track of exactly how much money your character has, because it’s all handled with rolls. If your character has a high resource stat, it’s perfectly reasonable to describe them dropping hundred dollar bills like nothing, while someone lower down has to struggle for every fiver.

In many of these systems, failing a purchase roll can result in the character’s resources being taxed, rather than not being able to afford what they’re after at all. I certainly can’t afford an Alienware gaming computer, but I could probably scrape together the cash if I sold off most of my possessions or took out a major loan. This allows for resources to be a sliding scale, rather than a binary afford/not afford switch.

The resource stat method is far more abstract than the previous two, and that’s all the better. It allows groups to describe whatever monetary system they damn well feel like without worrying that it’s going to be painful doing the math. It also avoids some of the Storytelling system’s problems by making the resource stat an integral part of character creation. You can’t start without one any more than you can start without a strength score.

Despite all of the good things I just said about it, there are still a few problems with this method. It doesn’t work for a system like D&D, where gear is acquired and discarded all the time. Rolling a single stat so often would get very tiresome. Its abstract nature can also lead to players feeling a little disconnected from the setting, if no effort is made to keep things grounded.

Even with these problems, I think the resource stat method is the best way to handle money in roleplaying games, as it ensures a focus on what is actually important. It stops games from getting bogged down in the minutia of Accounting 101, and lets everyone focus on telling a good story instead. Story is what these games are supposed to be about, after all, and money is an integral part of stories, whether it’s 10,000 credits to Alderaan or 200 in platinum for a stolen cargo. The trick is to make issues of money work for the story instead of getting in its way.

Comments on Three Ways of Handling Money in Roleplaying Games