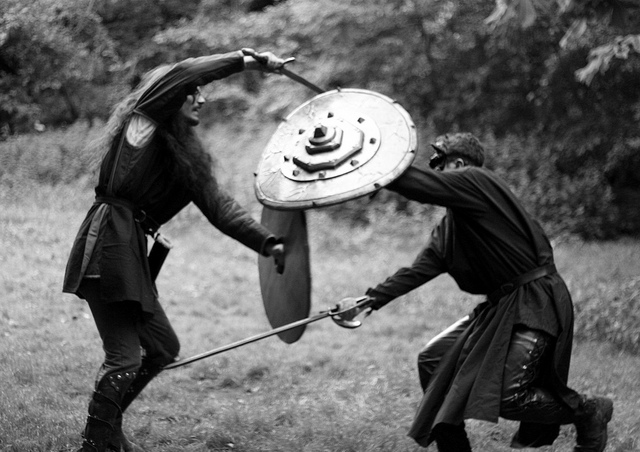 The subject of player versus player conflict (PVP) has always been a difficult one. In a roleplaying game, you feel like you should be able to do anything within your character’s ability, including stab that annoying elf in the face. However, if that elf happens to be another PC, then everything is suddenly much more complicated. Some groups have so much trouble with the idea of PVP that they flat out ban the practice, while others don’t regulate it at all, turning each game into a mad free-for-all. Fortunately, there is a middle ground. Here are a few of the most important guidelines to remember while managing PVP. 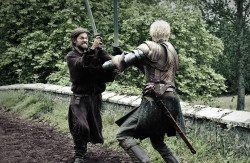 Think of your favorite dramatic story, be it in book, TV, film, or papyrus form. There’s a good chance that whatever story you’ve thought of contains conflict between the main characters, not just a straight up fight of them against the villain. These conflicts can take the form of physical confrontations, arguments, or something more specific, like one hacker trying to break through the firewall of another.

A Song of Ice and Fire contains many fantastic examples. Just consider the fight between Jamie Lanister and Brienne of Tarth. If this story were a campaign, both Jamie and Brienne would be PCs. The story would have lost something if they drew swords and the GM had said, “Hold on guys, there’s no PVP on my game.” A more social example comes from the Star Trek: The Next Generation episode The Measure of a Man, where Picard and Riker take up opposing positions on the issue of Data’s legal rights.

Those conflicts and others like them are an essential part of storytelling, and can increase the caliber of story told around the roleplaying table. They can be especially useful in games with a lot of players, as they allow multiple PCs to share the spotlight. I know that the final session of my last campaign would not have been nearly as cool without two PCs shouting at each other about the ethics of deploying their superweapon as they stood upon a skyscraper during a thunderstorm.

The big issue to remember in all this is that most roleplaying games, unlike other storytelling mediums, depend on a group of characters who hang out together and work in close proximity to each other. It’s good for PCs to have the occasional conflict over their beliefs, but things can get of hand if it happens every session. Too much PVP, even if it’s all done well, will make the players start to wonder why their characters spend so much time together when they obviously hate each other’s guts.

The GM and players should work together, especially during character creation, to make sure the line of too much conflict isn’t crossed. Once the game has started, players shouldn’t be afraid to tweak their characters a bit to make them fit. Making your elven mage believe all orcs deserve to die may have sounded like a good idea during character creation, but when the guy across the table from you is playing an orc, it’s probably time to tune things down a bit. 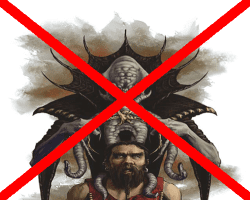 There seem to be a lot of groups out there that are accepting of physical PVP, but shun social PVP like the plague. The idea of stabbing another PC is all right, but rolling diplomacy against them is a no-no. This is an unfortunate attitude, because so many of the great inter-character conflicts of fiction are social in nature. A debate on the Senate floor can be the climactic high point of a campaign as much as an epic clash of blades.

When in doubt, a good time to activate social PVP is when two players have reached an argument that is going in circles. Bob says “give me the gun,” Jen says “let me keep the gun,” and they go back and forth without much change. At that point, the GM should step in and have both players either roll dice to settle their dispute, or drop it and move on.

It’s especially important in social PVP for both players to understand what’s at stake. Clarify the intent of those involved, than make sure everyone is okay with rolling the dice. If a player doesn’t want to, then that’s that.

The danger of social PVP lies in a player feeling like they’ve lost agency. A big reason people roleplay is to experience freedom and the ability to do things they couldn’t in real life. It’s not a lot of fun to have that freedom suddenly taken away. That’s why it’s a good idea to make social PVP about what PCs are going to do, rather than what they think. “We’ll let the prisoner go free,” or “the judge will rule in my favor” make much better stakes than “you will now love all orcs.”

Do Let Players Frame Their Own Conflicts. Don’t Let Them Bully Each Other. 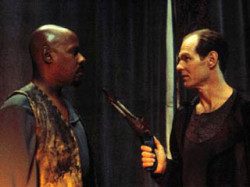 I’m a big advocate of players being able to participate in shaping the story of a roleplaying game, and that includes PVP. If two or more players have an idea for conflict that will make the game more fun, the GM should do their best to make it happen. This may require a discussion beforehand to make sure everyone is on the same page, or it may arise naturally in play. Whatever the case, so long as everyone is having fun and their ideas aren’t disruptive, the GM should be as accommodating as possible.

The key here is that these ventures should be cooperative in nature. At the risk of being a Sith via dealing in absolutes, GMs should never allow one PC to force conflict on another who doesn’t want it. The same goes for the implied threat of a conflict. You might have been in a group where the PC who is best at fighting gets their way by threatening physical force on those who disagree. I’ve even seen this escalate to the point of one PC killing another, and then everyone’s night is ruined. This sounds obvious, but you’d be surprised at how many groups allow it to happen. Sometimes the GM is too timid to step in, and sometimes they just don’t realize what’s going on.

Like most aspects of a roleplaying game, PVP should be used to facilitate fun. No one likes getting steamrollered by another player over two copper pieces found on a goblin’s corpse, but they might very well enjoy crossing blades to see who will be named Hand of the King. Using PVP in your games allows for a much more natural narrative experience, as the drama doesn’t have to be brought up short simply because it calls for the PCs to oppose one another.

Comments on Three Dos and Don’ts of PVP