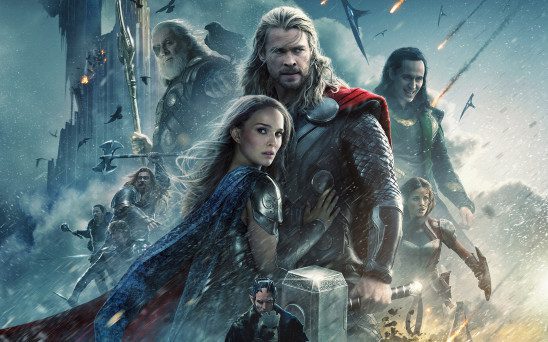 Thor’s third appearance in the Marvel movie universe is an altogether solid film that needs no support from its prequels. The worst sins of the first Thor movie have been avoided, and it’s clear that Joss Whedon’s Avengers dialogue remains a strong influence on the franchise. Although this movie isn’t ground breaking, you won’t feel like you’re just treading water while you wait for Avengers 2.

The plot is straightforward, and fairly typical save the world fare. You’ve seen it before: an ancient enemy threatens to reclaim an evil MacGuffin and use it to destroy the world. The heroes are caught off-guard and their loved ones are endangered, making their desire to defeat the darkness more personal.

On a positive note, there are no glaring plot holes that make you wonder why Thor and his friends are making things more complicated than they need to be, and there is no complicated set up that the movie then fails to deliver on. Also, Thor’s plan to defeat Malekith is terrible, and the film treats it as such by allowing him to fail miserably. Rather than the plot bending around a dumb main character, we get to see Thor falter before the climax.

The earlier action sequences drag on, but fortunately the climax avoids that issue. I was also expecting some long exposition dumps to fill in details from the previous movies, but the writers avoided that, instead giving just enough information for the movie to work for a new audience.

The Nine Realms and Asgardians are greatly improved, compared to  the first Thor movie. Who the Asgardians are, their role in the universe, and where Midgard (Earth) fits into the whole thing is more understandable. The realm of Asgard feels much more like a world where a rich culture resides, and less like where the Space Vikings return to party between battles.

The concept and scope of the movie’s conflict is also interesting. First introduced as Dark Elves, Malekith and his army start out as a typical evil fantasy race that wants to destroy the entire universe. However, as the movie builds the Dark Elf mythos, it becomes clear Malekith desires not a destruction, but a restoration.

The Dark Elves inhabited the universe before the creation of the Nine Realms, and have suffered an oppressed existence ever since. Malekith is trying to reclaim that universe of darkness that existed before “creation” stole it from his people. While I don’t think that the Dark Elves were given enough development to be truly sympathetic, it does make it interesting that Thor and Malekith are simultaneously filling the role as protector for their respective peoples.

Then there’s the Convergence, an event that occurs every 5,000 years where all of the Nine Realms bleed together. This manifests as a mad game of Portal that throws Thor and Malekith in and out of all of the realms over the course of their fight. The scientists and their interns, led by Thor’s love interest Jane Foster, figure out a way of manipulating these portals just enough to keep themselves alive as Malekith’s army is trying to kill them. While the idea of a rare alignment allowing catastrophic events to occur is not new itself, the buildup and payoff of the Convergence in Thor is excellent.

Much of film is set in the bluntly named Dark World that the Dark Elves originated from. Unfortunately, the landscape design for this setting is drab and flat. The visual feel of the movie is still an improvement over the first Thor (which felt like it was filmed almost entirely at a single New Mexico street corner), but when some of the best visual moments in a space fantasy movie take place in Greenwich England, you’ve missed an opportunity.

We do get to see a battle over the heart of Asgard, with Dark Elf sythe-like ships fighting Asgardian craft styled after Viking long ships. The visual effects here are judiciously used, adding to the action without becoming the focus of the scene. 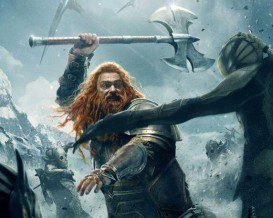 The characters that were given enough screen time to develop are very strong. Thor and Loki both return with solid writing and great performances by Chris Hemsworth and Tom Hiddleston. Both have been successful in communicating the essence of their characters, and the chemistry between them makes the scenes that feature both Asgardians stand out.

Jane Foster, played by Natalie Portman, is worlds better than in her first appearance, where she was such a weak female lead that it was simultaneously comical and painful. Thor’s mother Frigga (Rene Russo) is also a very strong character, coming across as more god-like than Odin in many ways. Rounding it out with Jane’s intern Darcy (Kat Dennings), who steals even the scenes she shares with Thor, and The Dark World has the strongest female cast of any of the Marvel movies so far.

Unfortunately, the movie involves too many characters to do them all justice. In particular, Thor’s allies in Asgard are one-by-one given a good line, a heroic cut, and then the film moves on without them. Hints about a potential love triangle between Thor, Jane, and Thor’s Asgardian companion Sif (Jaimie Alexander) were continued from the first film, but it still wasn’t given time to play out.

Even though The Dark World is a comic book superhero movie, it’s strongest in its quieter moments. The Avengers’ successful dialogue style is continued, and the actors deliver it perfectly, be it Loki’s aloof snark or Darcy’s cute awkwardness. One of my favorite moments is between Darcy and Thor. Darcy looks at Thor and says, “How’s space?” And he looks down at her and says, “Space is good.”

Loki, the master trickster, gets more than his share of great lines. The character’s cunning, contempt for others, and complexity all combine to make every scene better once he opens his mouth.

A Solid Movie With Promise of Growth

The Dark World is an improvement by far over the first Thor movie, and it proves that the character has a promising future outside of the ensemble Avengers movies. Fans of the growing Marvel movie franchise will want to see this for sure, and it is succeeding with general audiences as well. It suggests that Avengers 2 will be worth watching. Overall, this movie a solid addition to Marvel’s movie collection.