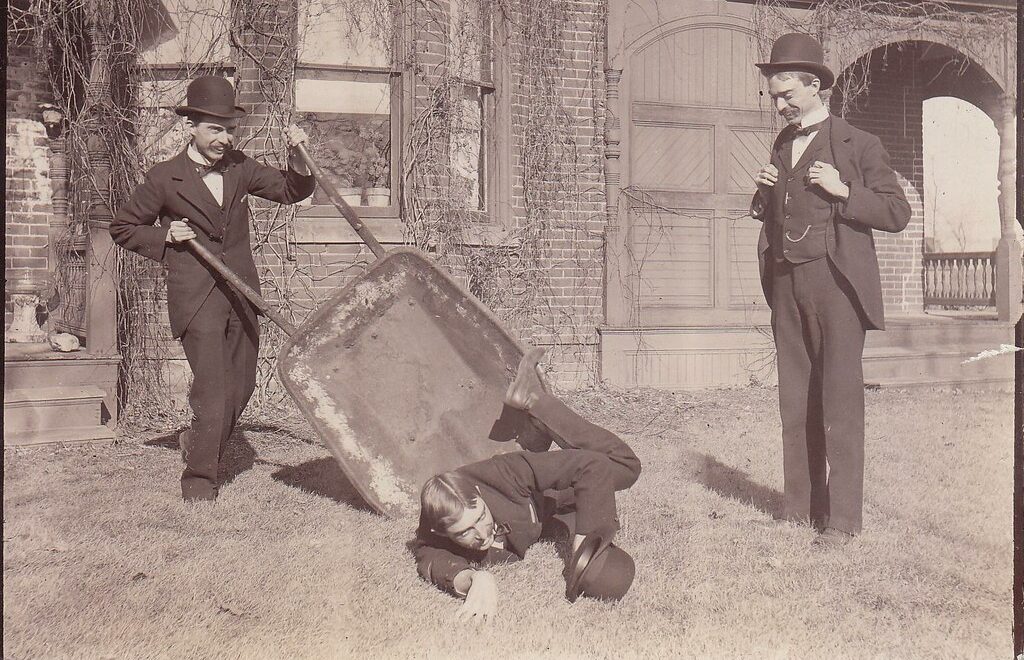 Three Stages of a Pratfall by Derek Doran Wood used under CC BY-NC-SA 2.0

So your first-level Fighter just took a sword to the chest. Are you so wounded you can hardly fight anymore, even though you’re still alive? Do you get powered up for a devastating counterattack? Maybe you suffer no consequences at all besides losing some hitpoints. That’s the difference between slippery slope, perpetual comeback, and neutral mechanics. Noted game designer David Sirlin developed these terms in a discussion of video games, but they’re just as relevant to pencil-and-paper RPG design, and they can radically change your experience at the table.

Pilar winced as she added the modifiers: minus 7 for the bullet wound to her right arm, minus 5 for the bullet in her chest, and minus 3 for the one in her leg. Aside from flesh wounds, she had minus 2 for fatigue and another minus 4 for the emotional distress of seeing her best friend drop. I’d better not complain, Pilar thought, or I’ll get another minus 15 for whining.

More often than not, a slippery slope is considered the most realistic option. It is usually easy enough to justify, and it can speed things up as players either succeed so easily that there’s no need to roll or are so likely to fail they won’t even bother. It means that the first few actions in an encounter are critical, as they can determine the failure or success of the entire encounter. Furthermore, no action is unimportant, as each one can help build momentum. It can also heighten tension, since if you fail, things are going to get much tougher. Furthermore, it rewards success and punishes failure, a feature many find desirable. Most leveling mechanics are a type of slippery slope: The more you succeed, the more experience you get, and the more powerful you become.

Jun held their breath as their GM rolled for Orchid, using every die he had and several dice borrowed from his players. Jun didn’t know if they could endure Orchid’s special attack, Ultimate Powerful Dragon Punch at Full Force, but if they did, well, that much power would charge up their own special attack, Final Super Tiger Kick at Full Force, more than it had ever been before. If they survived this attack, Orchid would not survive their counter. But if he does survive, Jun thought, I definitely won’t survive his counter!

A mechanic with perpetual comeback, on the other hand, works as the opposite of slippery-slope mechanics. If you fail this time, you are more likely to succeed on your next attempt, and if you succeed, you are more likely to fail on your next attempt. Games with perpetual comeback are a little rarer, but they do exist. Examples of this mechanic in action might include the following:

Perpetual comeback gives a disadvantaged character a better chance to succeed, allowing for the “come from behind” trope so often seen in fiction. It also means that one bad die roll won’t stymie the whole adventure. Because comeback mechanics balance success and failure, they’re less frustrating for unlucky players while supplying a check on power gamers. Lastly, this option prevents players from having to slog through several more rounds of a fight that’s already been lost or won.  However, it can have a weird incentive where players try to fail in order to gain a skill increase or combat advantage.

Level-appropriate encounters are a form of perpetual comeback. The more you succeed, the more powerful you become, the more powerful your enemies and obstacles become. Many GMs will apply a form of perpetual comeback behind the scenes, making the challenges easier if the players are failing frequently or more difficult if the players are doing too well.

Harry normally loved this game, but at this moment, it was a slog. His barbarian had started with close to 200 hitpoints. Taggler the Ogre Champion was probably about the same. Harry had 20 hitpoints left. He hoped Taggler had fewer than that, but all his DM would say was, “He looks hurt.” Harry slogged on.

A neutral mechanic means your failure or success at a given task has no direct bearing on your chance to fail or succeed at your next task. Neutral mechanics are very common, perhaps the most common in most games:

Neutral mechanics are generally easiest to manage, and they result in the simplest rules. This option has none of the advantages of the other properties, but none of the disadvantages either. There is nothing specifically wrong with having neutral mechanics; even games that deliberately aim for slippery slope or perpetual comeback will have numerous neutral rules.

Choose the One That’s Best for Your Game

You can use slippery slope to help build atmosphere in horror, gritty realistic, and tragedy games. For instance, the spiraling sanity stat in CoC reinforces the feeling that the uncaring universe really is out to get the PCs. The high dangers of a combat can force PCs to avoid gunplay, knowing that a single bullet can lead ultimately to TPK. The increasingly difficult rolls can build a feeling of inevitable tragedy, as all the PCs can do is to try to die with dignity and honor (assuming the players are actually okay with that).

Perpetual comeback is good for more heroic, cinematic, swashbuckling, or lighthearted games. It allows the back-and-forth rhythm and the last-minute comebacks seen in much adventure fiction. It can also let you build up your final attack, so the attacks at the end of the fight are stronger, not weaker, than the attacks at the beginning. High-level superhero, anime, and action movie games all but require perpetual comeback.

Neutral’s simplicity makes it appropriate for simpler games and games with limited rule sets. Neutral rules tend to be quicker to learn and easier to understand than slippery slope or perpetual comeback and require less bookkeeping than either.

No one mechanic is inherently the best for all games. It all depends on the mood you want.