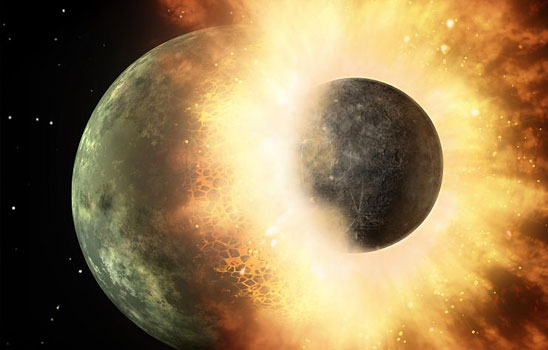 Last week, I described how avid worldbuilders often sideline the stories they’re telling in favor of parading the setting around. Now I’m pointing at storytellers who treat their worlds as an afterthought. We know who they are because their stories are committing these sins.

The characters are in the midst of a scene when a new spell or gadget is introduced. It’s never been mentioned in the story previously, and it’s suspiciously convenient for the conflict at hand. When that conflict is over, it is never mentioned again. Then the next conflict shows up and with it another new item. Pretty soon the world has a whole collection of technomagical novelties that feel arbitrary. There’s a spell that can turn clothes red and yellow, but only if it’s on Saturday and the buttons are still attached. 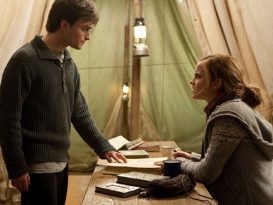 Harry: Why is Wormtail responsible for my parents’ deaths if Voldemort is the one who killed them?

Hermione: There was a powerful spell that made it so Voldemort couldn’t find them by any means, unless Wormtail told him how to.

Harry: Couldn’t they just use a spell that hid them even if Wormtail told everyone?

Hermione: No, of course not. That spell can’t exist because plot.

Harry: But what about that unbreakable vow spell that made Snape kill Dumbledore even though he really didn’t want to? Why didn’t my parents cast that on Wormtail to keep him quiet?

Hermione: Because then you wouldn’t be the tortured chosen one! Really Harry, read the books sometime.

Choose a basic metaphysical template for how your world works. Does magic exist because everyone is a figment in the mind of the divine? Is there faster than light travel because of quantum entanglement? You need some concept that underlies all the magic and futuristic technology in your world. Once you have that, you can invent specific spells or tech by extrapolating from the core concept. That way, even if you introduce your technomagic late, it won’t feel arbitrary because it clearly fits in with everything else.

2. Making Characters Too Stupid to Use Tech

Since these storytellers are inventing magic and technology on the spot for their plot convenience, they rarely think through just what it’s capable of. Only later do they realize that if their technomagic was used by people with half a brain, it could cure all diseases or destroy the solar system. That’s a problem; it would eliminate every plot opportunity available. So instead the characters act stupid, endangering lives rather than using the reality-shaping gun they have waiting in their closet. 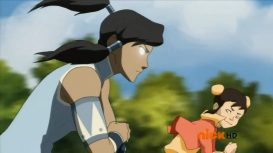 Jinora: Korra, you can’t let the villain capture you. You must go into the all-powerful avatar state!

Korra: That’s only for the most dire circumstances!

Jinora: But you used it to beat us in a race last summer.

It’s important to think through the ramifications of your technomagic before it’s introduced and create built-in limits. If you don’t realize the problem until it’s too late, create more limits retroactively and explain them to your audience. It won’t be perfect, but it’s better than hoping they’ll forget there’s an easy solution to the hero’s problem.

3. Using a Setting the Size of a Snow Globe

If the heroes went someplace new, the storyteller would have to lift a finger to invent it and describe it to the audience. Instead the characters stay within five minutes walking distance at all times and epic-level problems come to them. Somehow their home town never runs out of serial killers, cultists, or angry spirits, even though the heroes kill them out at every opportunity. There are buildings still standing despite how many are wrecked every episode, and unarmed citizens stick around rather than fleeing what is clearly a terrible place to live. 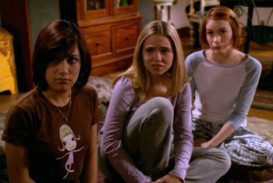 Potential 1: Could you tell us how to get to the mall?

Potential 3: Maybe we should go to some other town with sane traditions?

Buffy: Well I suppose you could teleport to the Los Angeles Universe. But only if you’re going to learn life lessons from Angel.

The scope of your setting must fit the scope of the conflicts that take place there. You can stay within a small town for personal threats, but if your hero will be saving the world on a regular basis, you’ll need a bigger playground to work with. Try starting with a small town and slowly adding the surrounding areas as the scope of the conflict rises. You don’t even have to narrate your heroes traveling; they can just be in a new place at the start of the next scene. If you have to keep epic struggles in a small area, come up with a reason why no one can leave. Then show how desperate being trapped makes them feel.

4. Giving Everyone the Same Outfit

Finally the heroes travel and meet new people. But even though they’re visiting an entire planet or nation, it feels like a small compound of cultists. Everything is too perfect or too desolate, too warlike or too peaceful, and definitely too unreal. The denizens act the same way, wear the same clothes, and hold the same opinions. It’s as if an entire society was made of clones. Because in the storyteller’s head, that’s what it is. After all, giving a new world a healthy level of diversity would require some effort, and they can’t have that. 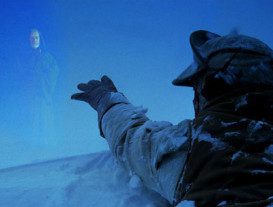 Obi: Dagobah, you know, the swamp?

Luke: Hmmm… I’m on the north pole planet right now; the swamp must be pretty far away.

Obi: You must go to complete your training. Find Yoda.

Luke: That’s it, just Yoda? You don’t have an address? Or even a continent?

Obi: It’s the swamp planet. There aren’t addresses or continents, just swamp. I’m sure you’ll find him, you only have to look through an entire planet full of living things.

You may not always have time to cover the full diversity of a place or culture. However, you can still acknowledge the existence of aspects that do not fit stereotypes. Don’t let all of your characters refer to an entire society as though it’s an undifferentiated mass. If a space ship scans the planet, it should come up with different results in different places. In a large area there should be more than one language and religion. If you understand the variety that exists in a society, that understanding will come through in your work, even if you never stop to describe it.

The universe isn’t a monogamous mass; it’s full of sentient species. Naturally, at least one hero has their first encounter with a member of another species. They look a lot like humans and there aren’t any language barriers, but the hero is still baffled by how bizarre the aliens are. No one wonders why these “strange” beings are about as different from humans as humans are from each other. Or why some of them are downright sexy. 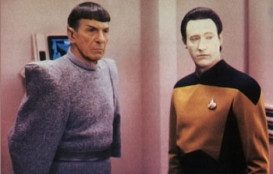 Data: If I may ask a personal question, are you indeed half Vulcan and half Human?

Data: I do not see how that is possible. Two species by definition cannot interbreed and produce viable offspring.

Spock: Allow me to explain. When a Vulcan male and a Human female love each other very much, they do this very personal thing called genetic engineering.

If you want aliens in your setting, make them alien! Otherwise, your futuristic races could be colonists that split off thousands of years ago, or they could be creations made by humans. Don’t rewrite the biological history of Earth if you don’t have to. In science fiction, that feels hokey more often than not. Luckily there’s more leeway with fantasy races; an alternate history where humans and other races split off from each other fits genre expectations. Even so, fantasy races should have a culture that’s more than superficially different.

The world is deep and elaborate – there are multiple factions with different abilities, all involved in battles, intrigue, and politics. But it must have sprung fully formed from Zeus’ head because it operates as though it doesn’t have a past. The story demonstrates that it only takes a bad decision from one person to topple the entire society, yet somehow it’s still around after a thousand years. The world is plagued by the same threat day in and day out, yet somehow no one has come up with any defense against it. Then the heroes just step in and shake everything up; naturally no one has tried that before. 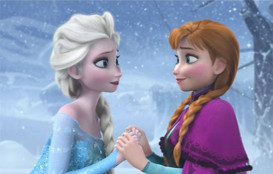 Elsa: That’s it! The solution is love!!!

Anna: You’ve been trying to control your powers for our entire lives, and you never figured that out?

Elsa: It never occurred to me.

Anna: So… you didn’t love me before now?

Look at the events of your story as they relate to the world and its technology or magic system. Ask yourself: why now? What has prevented this plot point from happening before? What’s different this time? You might decide it has happened before. If so, this history would be very relevant to the story, and it should affect how characters relate to the problem. Whenever you’re creating a world, put a little thought into its history in general. If you have a secret society that’s a thousand years old, make a rough timeline that outlines how they formed around 1000 CE, and how they were impacted by major world events since them.

7. Not Building a World at All

If storytellers don’t want to do their own worldbuilding, they can just copy the founding works of their genre and change a few names around. Elves are now called the Elthran, and vampires are… vampires, but now they’re sad and tragic! Soon libraries are filled with stories that copy the same world template without adding substantial innovations of their own. No one bothers to visit new worlds anymore, instead they take another vacation to faux Middle Earth. The storyteller has given up their chance to make a lasting impression by jumping on the fad bandwagon. 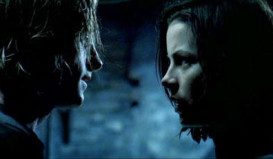 Michael: I’m becoming a werewolf? Like in some bad horror flick?

Selene: Not like that, for the moon no longer holds her sway.

Selene: Werewolves can transform whenever they want.

Selene: No! There are complex inter-species politics.

Michael: You mean like you’re a vampire, and your people and the werewolves are involved in some ancient war?

Selene: Fine, instead of a werewolf, I’ll make you into a crazy werewolf-vampire-mary-sue creature. Happy now?

Many classic settings are well loved by fans. There’s nothing wrong with using them provided you contribute something unique to the concept or world. Give it a twist like Keith Baker did in Eberron, a D&D setting with magitech. Create a thoughtful deconstruction similar to Soon I Will Be Invincible or Madoka Magica. Fashion a parody such as Galaxy Quest or a subversion like Buffy the Vampire Slayer.*

Unique worlds are the distinguishing feature of the speculative fiction genre. Many fans enjoy stories based on their world alone. It’s difficult for storytellers to give their worlds enough thought without getting lost in them, and to show them off without letting them take over. But those who find the right balance will enjoy a wider audience, because their work can be appreciated on many levels.

Which is now frequently copied itself.

Comments on The Seven Worldbuilding Sins of Storytellers