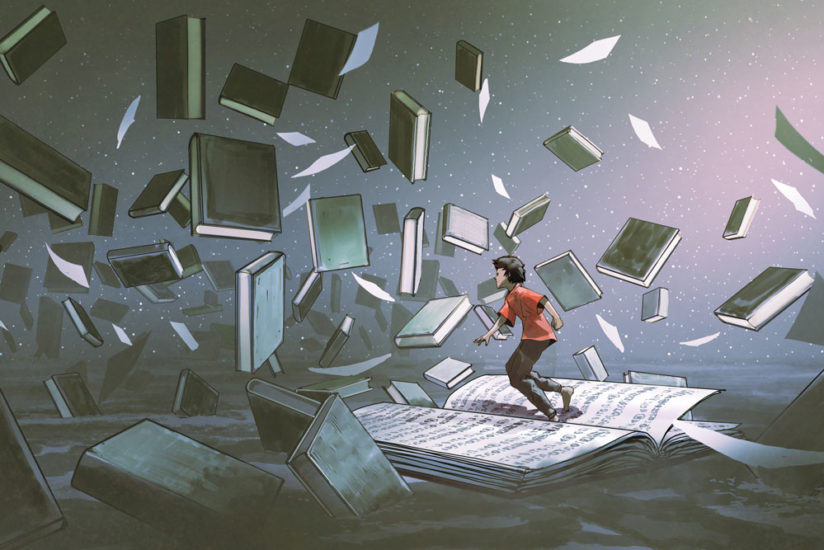 When I started Mythcreants, I had an axe to grind: for years the epic fantasy stories I loved had forced me to wade through belabored chapters that bored me to tears. I just wanted to see my precious farmboy be crowned king – why did I first have to hear about how some random elf plays elf chess?

I expressed my beef with multiple viewpoints in an article shortly after the site launched in 2013. But this criticism made me an outlier on the site and elsewhere; I even debated Oren about it on an early podcast episode. Then over the next five years, something strange happened. Oren decided I was right: multiple points of view are the bane of novels everywhere. After that, it became the official Mythcreants position.

While my original article (PDF) held up surprisingly well for newbie axe-grinding, our readers deserve an updated explanation for why we’re so cranky about a writing practice that’s considered normal. So, let’s go over the problems that multiple viewpoints cause and when they actually work.

How Multiple POVs Work in Theory

I’ve never insisted that multiple viewpoints have no use. Like other choices about narrative style and perspective, they are a valuable tool in the right situation.

In theory, using multiple viewpoints allows writers to benefit from the immersion of close limited narration without giving up the opportunity to narrate the thoughts of side characters. By including a character’s viewpoint, writers can help their audience get to know that character more intimately and understand where they’re coming from.

A great example of this in practice is Steven King’s The Shining. In it, a family of three – Wendy, Jack, and Danny – are isolated for the winter in a haunted hotel. Jack has a history of heavy drinking and violence, which almost caused Wendy to leave him previously. As the hotel works its evil magic, Jack’s troubling behaviors reemerge.

King could easily have told this story with one viewpoint. However, he clearly wanted his audience to root not only for Wendy and Danny’s survival, but for the whole family to stay intact. By switching between the viewpoints of all three central characters, King develops each person in detail, builds sympathy for the antagonistic Jack, and explains why Wendy doesn’t leave with Danny at the first sign of trouble. If King had used omniscient narration to do this, he would have sacrificed far too much tension for a horror story.

Many other novels feature a few central characters that deal with the story’s problems together, romances in particular. Using the viewpoints of both people in a relationship arc can allow readers to discover the full complexity of each character’s perspective. With a better understanding of the obstacles they face, relationship conflicts can become deeper and more interesting.

How Multiple POVs Work in Practice

Instead of being a technical tool for developing characters, multiple viewpoints have become synonymous with something else: multiple stories thrown into the same book for very little reason.

As long as a writer sticks to one viewpoint, the main character has to be included in every scene.* While writers chafe at this restriction, it’s really good for them. In a world where most writers don’t know what a throughline is and are always stuffing too many ideas into one book, a single viewpoint forces them to streamline and focus on what matters. It doesn’t guarantee a tightly plotted story, but it definitely helps.

When writers add a new viewpoint, they often do it for the explicit purpose of inserting content with little or no relevance to what they’ve already written. They might even jump to an entirely different continent to follow characters that have no practical means of interacting with the main character anytime soon, such as the Daenerys viewpoint in Game of Thrones.

Writers believe that if they bring these disparate arcs together at the end, this practice is fine. But that’s not true. As long as the novel is stretched between independent stories running in parallel, engagement will suffer. A great end doesn’t justify a terrible beginning and middle.

How This Makes Novels Boring

When people read for pleasure, they generally pick up a book and read it through. They don’t read a chapter of one book, put it down, read a chapter of another book, and then switch back to the first book again. The reason for this is pretty obvious. A story has specific mechanisms for hooking readers. When a reader is hooked on Lord of the Rings, they want to read more Lord of the Rings, not more Interview With the Vampire or more Dune.

The two primary mechanisms for hooking readers are:

New viewpoints often feature a different character facing different problems. That means even if the previous viewpoint had a great hook, the new viewpoint isn’t benefiting from it. For readers, it really is like starting another book.

Then, many writers make this problem worse. It’s incredibly common to only bother with a good hook for the first viewpoint of the story, which features either the main character or a throwaway character during a prologue. Once this is done, writers assume they can throw in another story without taking the same time and care to hook readers. After all, the writer can make readers wade through this second story by holding the first one hostage. They might even end the first viewpoint on a cliffhanger before jumping to the second.

Considering all of this, it’s no surprise that so many secondary viewpoints are not only boring but actively resented. They’re getting in the way of the content readers are interested in.

This doesn’t mean that every reader will get bored during extra viewpoints. Some readers may become really interested in the world. Others may decide they like the secondary viewpoint character as much as, or more than, the main character. But even in a best-case scenario, readers will be more interested in some viewpoints than others. If they love a secondary viewpoint character, they could start resenting the main character for taking up time.

This is why even when you put effort into making each viewpoint riveting, it still doesn’t justify stuffing multiple stories into one book. If those secondary viewpoints had their own books, the writer would pay more attention to making them engaging, and readers would have more control over what they read. No one would be forced to put down Lord of the Rings until they read an obligatory chapter of Dune.

Since many novel writers emulate filmed stories these days, it’s also worth explaining why our favorite TV shows get away with covering so many protagonists with their own arcs.* It comes down to two factors:

Even so, the occasional TV show does get itself into trouble for doing what novelists using multiple viewpoints do. The second season of Stranger Things sent Eleven off on her own. Carnival Row had a cast of characters that barely interacted with one another. This lowered engagement just like it would in a novel.

A novel should be one consolidated story, not multiple stories that beg for reader patience as they inch closer together. As long as you keep to one story, it can be told with multiple viewpoints. This doesn’t mean you should give all your minor characters a viewpoint. Using additional viewpoints still takes readers further from a beloved main character, so they need to offer a benefit to make up for that. However, as long as you’re telling one story, the tension of the primary viewpoint should be in effect. In other words, the hook you put in earlier will be doing its magic.

So how do you know the difference between one story and many? To start, if you don’t actually need multiple viewpoints to cover all of the events of your plot, that’s a good sign you’re telling one story, not several. A more accurate but technical explanation is that multiple viewpoints should keep the throughline moving. Let’s dig into what that means.

Your throughline is the basic arc that holds your entire novel together. It opens with a big problem that your main character must resolve at the climax. For instance, they might need to find a loved one who’s been missing or stop the library from being destroyed. Then, movement is the sense that the story is heading toward that climax. It could mean the main character is making progress on finding their loved one or that they are approaching an inevitable confrontation with the villain who wants to destroy the library. When a story has good movement, every event is essential. If you take one event out, later events don’t unfold the same way. They’re all linked together in a single chain of causality.

Viewpoint characters can also act against each other. One viewpoint character might plant bombs beneath the library, and then the next viewpoint character could defuse the bombs. Generally, this would be a gray morality story where the protagonists are at odds but none of them are strictly villains, because villain viewpoints rarely work. On top of that, these types of political intrigue stories need to be tightly paced, with lots of interplay between viewpoint characters to stay entertaining. Most writers would struggle to keep this up.

If you’re on the fence about using multiple viewpoints in your story, you should stick to one. It’s essential to keep your story simple where you can, so when you inevitably want to add more characters, places, or magical curses, you’ll have a chance of fitting them in.

For your sake, I sure hope your single viewpoint character is your main character.
Visual media doesn’t have viewpoints, but when the camera follows a character around, it creates a similar effect.

Q&A: How Many POVs Should I Have in My Ensemble Story?

Comments on The Problem With Multiple Viewpoints