The Hobbit: The Desolation of Smaug Is… Pretty 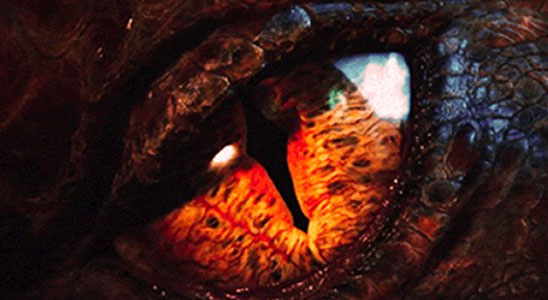 If you’ve watched the first of Peter Jackson’s Hobbit trilogy, part two won’t surprise you. While it has more action than the first, it has the same strengths – and weaknesses. If you’re looking for a powerful and gripping story you’ll be disappointed. But if you want to sit back and enjoy some simple entertainment, it will do the trick. 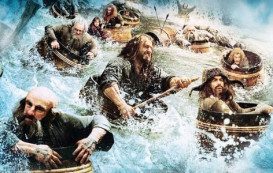 Unlike the first movie, The Desolation of Smaug doesn’t feel like a short story collection. It’s just an overly long plot that doesn’t go anywhere anytime soon. If you take it apart and look at its pieces separately, you’ll find each is fun and entertaining. There’s action and thrills in Mirkwood, the Elf Kingdom, Lake-Town, and of course, in the depths of the Lonely Mountain. But these scenes don’t work together to create a cohesive movie. Over two and a half hours, there’s ups and downs in the tension, but no significant build-up, and no uniting theme. That’s why it feels slow even with action at every step. 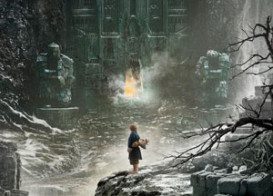 No surprise here. As it’s based on a work by Tolkien, the master worldbuilder and founder of the fantasy genre, they’d have to do something seriously wrong to mess this up, and they didn’t. You’ll see several new places, with not only amazing sets, but each with their own atmosphere and distinct inhabitants. Lake-Town in particular really comes to life. 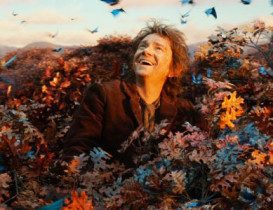 This movie looks amazing. My favorite moment is when Bilbo peeks above the trees of Mirkwood, and all the gloom of the woods is transformed into a beautiful sunlit landscape. The elf fortress looks as good if not better than the other elven cities, and Lake-Town is filled with old style charm. Most of all, Smaug is marvelously animated. A great deal of time is spent just looking at him, and it isn’t wasted. 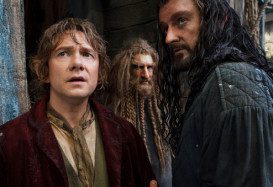 I think I was going easy on the first Hobbit when I gave it four stars for characters. Bilbo was well done, but the other characters were neglected. However, The Desolation of Smaug makes a significant improvement in that respect. The dwarves, Kili and Balin in particular, start to feel like real people. Even Bombur, who did nothing more than provide fat jokes in the first film, gets a glorious fight scene. Legolas also makes his entrance in this film, but it’s a very different Legolas than the one in LotR, suggesting it preludes significant character growth.

Again, Smaug takes the cake. Benedict Cumberbatch pulls off another amazing performance, making the dragon not just a fearsome threat, but also a memorable personality. 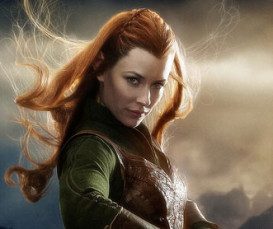 The first Hobbit movie falls flat, but The Desolation of Smaug falls flat on its face. There are several moments in the film that are clearly meant to be impactful, but are just ridiculous instead. I almost laughed out loud when the elf maiden, Tauriel, started glowing during a romantic scene. In addition, the dwarves’ most triumphant strike against Smaug isn’t remotely believable. Then there are the recursive Saurons; you’ll know them when you see them. I think Peter Jackson just tried too hard.

The music was also disappointing compared to it’s predecessor. Okay, so the first Hobbit just had Misty Mountains Cold, but admit it, that song is amazing. Even the credit music for Desolation of Smaug failed to add much.

There’s a lot of bitterness over the decision to split the Hobbit into three movies. The plot certainly could have been stronger had they decided to cut rather than stretch. But if you don’t see this movie on the big screen, you’re missing a big part of the experience. Smaug is impressive partly because of how enormous he feels; he won’t be the same on your home TV. See it for him, and for some light entertainment.

Read more about Lord of the Rings, Movies