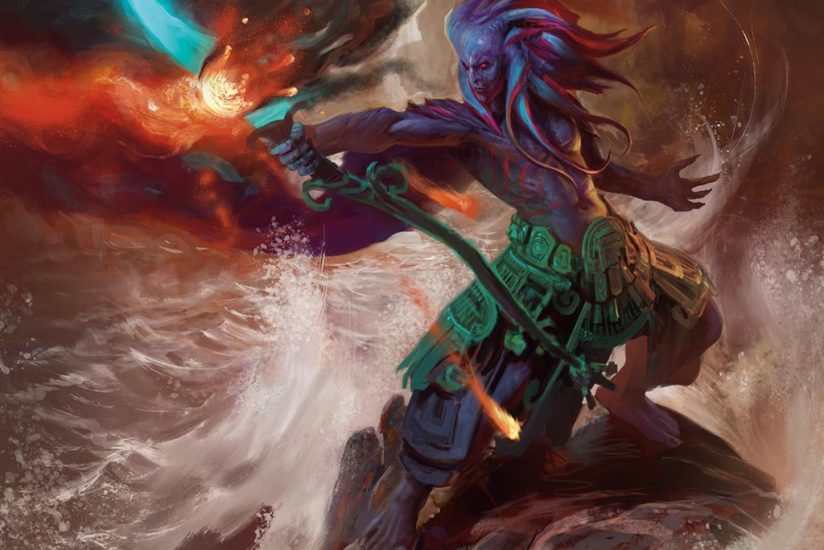 Last time, we continued this series by covering the five best 2nd-level spells in the game. This week, we’re looking at 3rd-level spells. This is another tier of spells chock full of extremely powerful options that punch above their weight. Much like 1st-level spells, I have to leave off some very good spells to whittle this list down to the final five.

I’m judging these spells using four criteria. The first and most obvious of these is combat effectiveness. If a spell ends fights every time you use it, then it’s probably a good spell. However, spells are flexible tools that often bring huge amounts of noncombat power to the table. I am also looking at how many different character types want each spell. A spell useful to a wide variety of builds scores higher than one that only works for a single build. Finally, I look at how strong the spell is across levels 1–20. Some spells start off incredibly strong but fall off later, while others remain evergreen.

This spell creates an undead servant. Choose a pile of bones or a corpse of a Medium or Small humanoid within range. Your spell imbues the target with a foul mimicry of life, raising it as an undead creature. The target becomes a skeleton if you chose bones or a zombie if you chose a corpse (the DM has the creature’s game statistics).

On each of your turns, you can use a bonus action to mentally command any creature you made with this spell if the creature is within 60 feet of you (if you control multiple creatures, you can command any or all of them at the same time, issuing the same command to each one). You decide what action the creature will take and where it will move during its next turn, or you can issue a general command, such as to guard a particular chamber or corridor. If you issue no commands, the creature only defends itself against hostile creatures. Once given an order, the creature continues to follow it until its task is complete.

The creature is under your control for 24 hours, after which it stops obeying any command you’ve given it. To maintain control of the creature for another 24 hours, you must cast this spell on the creature again before the current 24-hour period ends. This use of the spell reasserts your control over up to four creatures you have animated with this spell, rather than animating a new one.

At Higher Levels. When you cast this spell using a spell slot of 4th level or higher, you animate or reassert control over two additional undead creatures for each slot level above 3rd. Each of the creatures must come from a different corpse or pile of bones.

With all the new summoning spells on offer, it’s the venerable Animate Dead that rises to the top. Whereas the newer spells create a single, decently powerful entity, this spell draws its power from sheer numbers, namely a horde of bow-wielding skeletons. With the ability to safely control four undead per 3rd-level slot,* builds that focus on Animate Dead can find themselves controlling over 100 minions. While each individual skeleton is weak, together they can do an absurd amount of damage.*

The biggest problem with this spell is that when used to its fullest potential, it begins to break 5E’s combat. When you take a system designed for less than twenty combatants and try to cram 100 skeletons into it, some problems arise. From finding room on the battle map to taking your turn in a reasonable amount of time, this spell has a host of logistical issues that require both party and GM buy-in to solve. However, if you can make it work, this spell brings a ton of power to the table. Animate Dead shambles into fifth place.

From one type of resurrection to another, we have Revivify. This spell is a game changer in terms of what risks the party can now take during their adventures. Prior to this spell, death is a permanent end to a character. But now, for the low cost of 300 gold worth of diamond dust, you can quickly revive a dead character.

Alongside the obvious utility of cheating death, Revivify also makes for a good combat healing spell, even at higher levels. Unlike later resurrection spells, Revivify only takes an action to cast and has no drawbacks for the person you are reviving. It might have a restrictive time window in which it can be used, but during that 1 minute, nothing beats out this spell. Fourth place to Revivify.

A bright streak flashes from your pointing finger to a point you choose within range and then blossoms with a low roar into an explosion of flame. Each creature in a 20-foot-radius sphere centered on that point must make a Dexterity saving throw. A target takes 8d6 fire damage on a failed save, or half as much damage on a successful one.

The fire spreads around corners. It ignites flammable objects in the area that aren’t being worn or carried.

At Higher Levels. When you cast this spell using a spell slot of 4th level or higher, the damage increases by 1d6 for each slot level above 3rd.

Of the over 500 spells currently in 5E, none is more iconic than Fireball. This spell does one thing, damage, and it does it very well. No spell at this level provides as much offensive power in a single burst. Even at higher levels, this spell can pull its weight as a decent area-of-effect damage spell.

However, with great damage spells comes great responsibility. As good as Fireball is in the correct situation, there are some good rules of thumb to follow when deciding whether or not to cast this spell. First, using Fireball as a single-target damage spell is usually not worth the slot. At 3rd level, the spell deals an average of 28 damage. A basic Fire Bolt deals 15, on average. A 3rd-level slot is not worth such a small increase in damage.

Secondly, you probably don’t want to up-cast Fireball if you can help it. While 8d6 is very good damage for a 3rd-level slot, gaining 1d6 per slot level above that is a terrible return on investment. Only up-cast Fireball if you need area-of-effect damage and don’t have any higher-level damage spells like Cone of Cold or Synaptic Static. If you keep these limitations in mind, Fireball is a powerful damage option unrivaled at the tier of play where it is acquired. This iconic spell takes third place.

You create a twisting pattern of colors that weaves through the air inside a 30-foot cube within range. The pattern appears for a moment and vanishes. Each creature in the area who sees the pattern must make a Wisdom saving throw. On a failed save, the creature becomes charmed for the duration. While charmed by this spell, the creature is incapacitated and has a speed of 0.

The spell ends for an affected creature if it takes any damage or if someone else uses an action to shake the creature out of its stupor.

You know what’s better than killing your opponent? Bypassing all those pesky hit points and rendering the target completely useless as a combatant. Both Hypnotic Pattern and our first-place entry do just that. Any creature caught inside this spell has one chance to save or become incapacitated, removing it from the fight and forcing it to drop any spells it might be concentrating on.

It might seem easy for any enemies who pass the save to wake up their comrades, but that’s an action per failed save, which can mean the enemy is tied up for an entire round or more. That’s a long time in D&D combat. Alternatively, if the monsters don’t wake each other up, this spell can single-handedly end an entire encounter. In that scenario, a group of enemies becomes two much smaller groups – those who failed and those who didn’t – that the party can easily deal with in isolation.

The biggest issue this spell has is that creatures immune to the charmed condition can’t be affected by Hypnotic Pattern. At lower levels this is rarely an issue, but at higher tiers of play, many monsters have such an immunity. However, when Hypnotic Pattern does work, it more than earns its second-place spot.

You project a phantasmal image of a creature’s worst fears. Each creature in a 30-foot cone must succeed on a Wisdom saving throw or drop whatever it is holding and become frightened for the duration.

While frightened by this spell, a creature must take the Dash action and move away from you by the safest available route on each of its turns, unless there is nowhere to move. If the creature ends its turn in a location where it doesn’t have line of sight to you, the creature can make a Wisdom saving throw. On a successful save, the spell ends for that creature.

As good as Hypnotic Pattern is, I find Fear to be the generally stronger version of the same effect. While Hypnotic Pattern can be broken via damage or another creature’s action, Fear has no such conditions. Instead, your enemies are forced to flee from you and are only able to make additional save attempts when you’re out of sight. The main problems with Fear are its cone-shaped area of effect and the fact that many high-level monsters are immune to the frightened condition.

Even if an enemy does save after breaking line of sight, any weapons they were wielding will be on the ground where they started. Against some monsters, the loss of a weapon can shut down almost all of their damage potential. The process of fleeing also isn’t without risk. Since they are forced to take the dash action, they are left open to opportunity attacks, and even the “safest” path might include damaging effects, such as Spike Growth or Wall of Flame. With a potent combination of shutdown and damage potential, Fear more than earns its first-place slot.

That wraps up 3rd-level spells. Tune in next time as I cover the 4th-level roster.

Increasing by two for each level above 3rd.
They also make a good dumping ground for any extra magic items the party has.
Jump to Comments