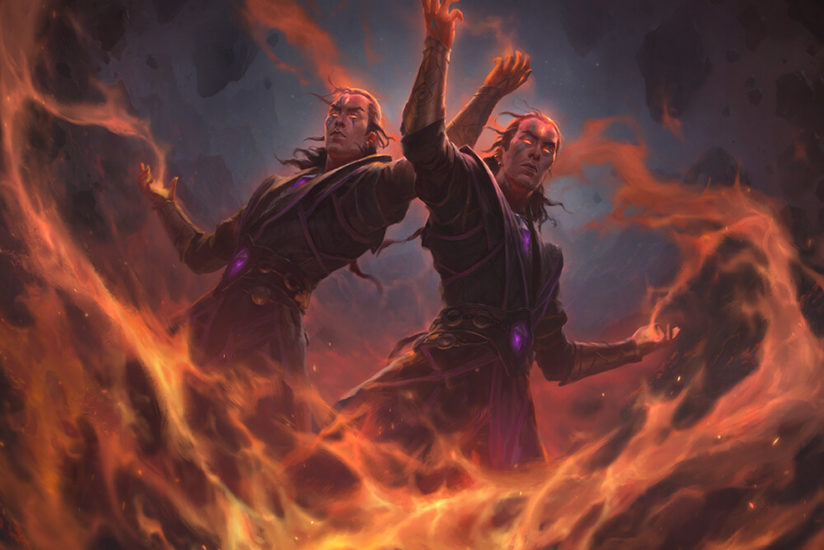 Last time in this series, we covered the five best 1st-level spells in the game. This week, we’re looking at 2nd-level spells. Unfortunately, this batch of spells has fewer standout options than the ones we covered last time.

I’m judging these spells using four criteria. The first and most obvious of these is combat effectiveness. If a spell ends fights every time you use it, then it’s probably a good spell. However, spells are flexible tools that often bring a huge amount of noncombat power to the table. I am also looking at how many different character types want each spell. A spell useful to a wide variety of builds scores higher than one that only works for a single build. Finally, I look at how strong the spell is across levels 1–20. Some spells start off incredibly strong but fall off later, while others remain evergreen.

Choose a manufactured metal object, such as a metal weapon or a suit of heavy or medium metal armor, that you can see within range. You cause the object to glow red-hot. Any creature in physical contact with the object takes 2d8 fire damage when you cast the spell. Until the spell ends, you can use a bonus action on each of your subsequent turns to cause this damage again.

If a creature is holding or wearing the object and takes the damage from it, the creature must succeed on a Constitution saving throw or drop the object if it can. If it doesn’t drop the object, it has disadvantage on attack rolls and ability checks until the start of your next turn.

At Higher Levels. When you cast this spell using a spell slot of 3rd level or higher, the damage increases by 1d8 for each slot level above 2nd.

If your opponent is wearing metal armor, this is one of the most efficient low-level damage spells out there. The 2d8 initial damage isn’t great for a 2nd-level spell, but it can be repeated every turn at the cost of a bonus action. On top of that, the target makes all their attacks at disadvantage while they remain in contact with the metal.

If you target a creature’s armor as I mentioned earlier, there is no way for them to remove the armor during combat,* forcing them to take both the damage and disadvantage. This consistent damage does require your concentration, but at the level this spell is gained, many builds won’t have too many offensive concentration spells to choose from. Those that do exist, such as Moonbeam or Dragon’s Breath, involve saving throws for half damage and lack the powerful disadvantage secondary effect.

Another point in this spell’s favor is the classes that receive it. Bards and druids often find themselves lacking a good single-target damage option at this level, making Heat Metal the perfect choice to fill that gap. The main issue with this spell, as the name suggests, is that it requires metal to work. Depending on the types of enemies your group fights, Heat Metal could be useless most of the time. With this limitation, Heat Metal has to settle for fifth place.

You conjure a mass of thick, sticky webbing at a point of your choice within range. The webs fill a 20-foot cube from that point for the duration. The webs are difficult terrain and lightly obscure their area.

If the webs aren’t anchored between two solid masses (such as walls or trees) or layered across a floor, wall, or ceiling, the conjured web collapses on itself, and the spell ends at the start of your next turn. Webs layered over a flat surface have a depth of 5 feet.

Each creature that starts its turn in the webs or that enters them during its turn must make a Dexterity saving throw. On a failed save, the creature is restrained as long as it remains in the webs or until it breaks free.

A creature restrained by the webs can use its action to make a Strength check against your spell save DC. If it succeeds, it is no longer restrained.

The webs are flammable. Any 5-foot cube of webs exposed to fire burns away in 1 round, dealing 2d4 fire damage to any creature that starts its turn in the fire.

Moving from single-target damage to battlefield control, we have Web. This is one of the premier lockdown spells available, even at higher levels. Not only does it create a patch of difficult terrain, but it also forces creatures that start within or enter it to make a dexterity saving throw or be restrained. This spell is excellent for tying down large groups of enemies and making all of your attack-based party members more effective by granting advantage on attacks against restrained targets.

An interesting quirk of Web is how creatures trapped by it are able to escape. Instead of the traditional saving throw or even a skill check, this spell demands a straight strength check. This type of requirement is incredibly rare and bypasses any proficiency a target might have in strength saving throws or Athletics. Now, the webbed creatures must spend their entire action to make a roll they’re not particularly good at if they want to free themselves. As good as this spell is, it’s important to remember its weakness to fire. Be sure to talk to any pyromancers in your party before throwing out Web. Fourth place to this sticky control spell.

Briefly surrounded by silvery mist, you teleport up to 30 feet to an unoccupied space that you can see.

Being able to maneuver your character into the right position during a fight is very important in 5E, and Misty Step is one of the lowest-cost ways to achieve this. When melee enemies threaten a caster, the caster normally has to either tank the hits to their less-than-optimal defenses or run away and risk a bunch of opportunity attacks. Misty Step removes that dilemma, making it easy for a caster to reposition behind their more heavily armored friends. This spell also provides a handy way to escape grapple or powerful spell effects like a wall of force.

But that’s not all, for Misty Step also has noncombat applications. During exploration, you can use it to bypass obstacles, sneak through trapped areas, or get past a guard’s line of sight without alerting them. Granted, a 2nd-level spell slot is somewhat costly for those situations, but it’s still good to have when things get critical. Third place to Misty Step.

Magical darkness spreads from a point you choose within range to fill a 15-foot-radius sphere for the duration. The darkness spreads around corners. A creature with darkvision can’t see through this darkness, and nonmagical light can’t illuminate it.

If the point you choose is on an object you are holding or one that isn’t being worn or carried, the darkness emanates from the object and moves with it. Completely covering the source of the darkness with an opaque object, such as a bowl or a helm, blocks the darkness.

If any of this spell’s area overlaps with an area of light created by a spell of 2nd level or lower, the spell that created the light is dispelled.

Ah, Darkness, one of the most confusing and frustrating spells out there. When used correctly, this is among the best spells in the game, and when used poorly, it’s almost useless. What makes this spell’s power so swingy is its ability to create obscurement. Normally, this obscurement affects both you and your enemies, rendering it useless.*

However, there are ways to see through this obscurement. The warlock invocation Devil’s Sight and the Blind Fighting style can be obtained easily through feats or a multiclass, both making Darkness’s obscurement one sided. Now, all of your attacks are made at advantage, and attacks against you are made with disadvantage.

Darkness also has the bonus of getting stronger with the more characters who can see through it. In the right party, a single casting of Darkness grants one-sided obscurement to the entire group. The downside of this spell is that the inverse is also true. If only one person can see through the obscurement, then casting Darkness could be hindering your party alongside your enemies. This is due to many spells requiring the caster to be able to see their targets. Be aware of this when using Darkness to make sure you’re not frustrating your fellow players. Second place to Darkness.

Choose up to three creatures within range. Each target’s hit point maximum and current hit points increase by 5 for the duration.

At Higher Levels. When you cast this spell using a spell slot of 3rd level or higher, a target’s hit points increase by an additional 5 for each slot level above 2nd.

Hit points are a resource shared by every character in the game, and being able to semipermanently increase those hit points is very good. What makes this spell so good is its eight-hour, concentration-free duration. Once you have this spell, simply wait till the end of a long rest, then spend any of your remaining slots to cast Aid before you regain those slots from the long rest.* Now your entire party has more hit points, without even having to spend spell slots for that adventuring day.

Aid is also a very good combat healing spell. With a range of 30 feet, Aid can be used to bring back up to three unconscious party members. Normally, you’d have to spend at least a 3rd-level spell slot to cast Mass Healing Word. Sure, Aid only targets half as many creatures and requires a full action, but the lower spell slot is often worth the trade. First place goes to Aid.

That wraps up 2nd-level spells. Tune in next time as I cover the 3rd-level roster.

Armor-doffing time is measured in minutes.
Two blinded creatures attack each other normally in 5E.
This is called rest tricking by some of the community.