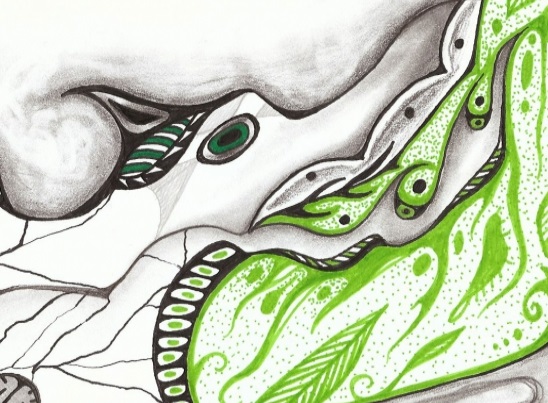 The Deep Forest is a collaboration by Avery McDaldno and Mark Diaz Truman, published by Buried Without Ceremony. It’s a reinterpretation of McDaldno’s earlier game, The Quiet Year, which is a mapmaking game about a small post-apocalyptic community’s struggle to survive in a harsh environment. Like The Quiet Year, players in The Deep Forest draw a map and guide the development of a community, but here they play a community of monsters, who have just driven invading humans off of their land.

This game is about decolonization. Instead of taming the wilderness, the monsters in The Deep Forest are tasked with reclaiming their identity as they remove humanity’s influence from their lands. In so doing, the monsters – along with McDaldno and Truman – are undermining some of roleplaying’s most deeply entrenched and damaging tropes.

A traditional roleplaying adventure involves heroes venturing out and killing monsters. Nothing’s wrong with that. Adventuring is fun. Combat is fun. Getting loot is fun. These actions tickle the reward centers in our brains, but they do present very strange worlds. Player characters are expected to get into something like three life-and-death battles every day. These are violent worlds, and people are encouraged to act violently.

Even if people try to avoid combat, the rules of the game may still endorse fighting as the natural and appropriate response. If, for instance, a kobold is blocking your way, a game master might allow you to intimidate him into leaving or search for a hidden back door. Or, she might say that’s just not going to work. But the rules say that when the kobold runs out of hit points it dies. Combat is a reliable option because it works regardless of the GM’s mood. And it’s usually the most fun or tactically interesting part of the game. If nothing else, it justifies the time we spent optimizing our fighter, so let’s save ourselves some trouble and just kill that kobold to get it out of our way.

The Deep Forest does not have hit points or combat rules or anything else that prioritizes violence. Instead, the core mechanic is drawing a map of a community. The map starts with only a few landmarks and borders but will grow over the course of the game. Every turn represents a week of activity for the community and begins with a random event that happened that week. For instance, someone is born, or someone fixes a building, or valuable resources are discovered. Your job is to elaborate on the brief description the game gives you and then, most importantly, draw it on the map.

Some events create conflicts. A member of the society might have sabotaged a project or stolen a resource. It’s certainly possible to react to that by having the guilty party killed, but the game isn’t built around that. It provides no special rules for violence; however, it does include rules for having a conversation and rules for starting projects. These activities are prioritized in The Deep Forest. Regardless of how the players may feel, the game says that talking things out is always an option.

Players can improve their society with projects, like erecting a building or searching for resources. Projects are meant to be constructive; they resolve issues that the card-driven events create for everyone. Whatever the nature of the project, it must be drawn on the map. This map isn’t just a reference for the players; it’s a representation of the community itself, and it grows fuller and more complex over time. That’s because The Deep Woods is about building and strengthening a society.

Of course, nothing stops you from using your projects to kill people and burn things, because again, The Deep Forest doesn’t have special rules for violence. But doing so creates an interesting side effect: you still have to draw it on the map. You might draw the corpse, or a grave, or some more metaphorical representation, but nothing goes away. Your violence has a legacy and is still, in a weird way, constructive. Because nothing gets erased from the map, you can’t just forget about the violence you committed, in the same way that we’ve all forgotten about the kobold who was thoughtlessly killed four paragraphs back.*

A Chance for Monsters to Speak

Because traditional RPGs are often built around combat, there needs to be a ready supply of bad guys to experience the pointy ends of our heroes’ weapons. That means a ready supply of monsters. They might be sentient, humanoid monsters with hopes, fears, and families, but they’re still monsters. Games dehumanize enemies so players don’t have to think about how their characters are straight-up murdering a half-dozen people every day and how that’s actually creepy.

Games that allow players to have monster characters make things even stranger. Various editions of D&D allow players to be orcs, for instance, but they don’t have mechanisms in place to make this a meaningful choice. In the eyes of the rules, the player is a big green human with enhanced strength. All the other orcs in the world are meaty sacks of hit points that stand between the players and the loot they’re after. GMs and players can work together to create more nuanced relationships between characters and orcs, but that’s all.

In The Deep Forest, however, the relationship between monsters and humans is the entire point. It starts with the insistent terminology: the entities you control aren’t characters, or people, or villagers. They are monsters and are always referred to that way. The game continually reinforces the idea that they are not human. Though problematic when applied to the bad guys, here the term is being applied to the protagonists. This game wants players to feel othered, because it’s essential to the core theme.

Actual humans are never present in a game of The Deep Forest, but their influence is everywhere. Human landmarks dominate the map, and human culture is referred to by many of the events. This forces the monsters to have a multifaceted relationship with humanity. They can’t be quickly summed up as humans but with pointy ears, or humans but green. Instead, events in the game force players to talk about what makes the monsters unlike humans, not just physically but in terms of culture, ritual, and practices. As this society and the monsters in it become more nuanced, the ways in which they differ from their human colonizers come to the forefront.

Though the monsters might lose their humanity, they never lose their personhood. This is one of the biggest differences between The Deep Forest and The Quiet Year. The latter game focuses on a human society and ignores its individuals; players control the people as a whole and never represent a single person. In the Deep Forest, every monster is a character; when you talk, specific monsters get a voice. Players don’t have individual ownership of the characters. Every player can take actions for any monster, but the monsters are still people. Weird and non-human people, sure, but people who will talk to one another, build things, and contribute to society. Not the kind of monsters who sit around in the woods waiting for adventurers to come along and kill them.

Exploration and Discovery Without Conquest

As I said before, traditional RPG adventures involve journeying and killing monsters. The exploration is just as important as the slaying. Trek through the wilderness, untouched by civilization, and kill the people who are already there.* It’s the insidious explorer fallacy.

Games that reinforce this colonial narrative suggest that discovering something is a creative act, which affords the discoverer a right to own or control whatever they discover. In real life, this presents a huge problem because people often already live there.

Fiction, especially a shared narrative like a story game, is more complicated because fictional people cannot have actual agency. No matter how big or populated the regions on the map, the player characters are the only people who actually exist in the world. A talented game master can provide agency for NPCs, but doing so requires a lot of work. It’s difficult to simulate characters with individual needs and distinct cultures without stripping attention away from the players at the table.

The Deep Forest gets around this by forcing players to remember cultural differences. While the main mode of exploring the map in The Quiet Year was called “Discover Something New,” here in The Deep Woods players instead “Discover Something Old.” Explicitly, what the players discover and add to the map is a relic from the human occupation or a relic that predates the occupation. This rediscovery is still a creative act, but everything gets created with a context and an owner in place; the monsters have no untamed lands to claim or foreign societies to disempower.

The game presents a very simplified universe: there are the humans, and there are the monsters. Both of them are treated as homogenous entities. There may be multiple types of monsters, but they’re all folded into a single community. It’s a severe simplification, but by focusing just on two groups, The Deep Forest allows both of them to be active participants in the world. The monsters are empowered because the players are monsters, and players are inherently empowered. Humans are empowered because nearly every location on the map is influenced by humanity, and the events that occur at the beginning of each turn remind players about the existence of humans. The game won’t let you ignore them.

The Deep Forest touches on themes that some people hate dealing with. The idea of “decolonizing” a place is uncomfortable, in part because it’s futile. The monsters can never remove humanity from their lives. Human structures stay on the map. You’re playing characters marked by something they are trying to get over but unable to forget, so there’s built-in sorrow. Worse, the monsters’ new society is probably doomed: the event that triggers the end of the game is the return of humans.

It’s also uncomfortable because it asks you as players to think about your relationship with cultural appropriation. The Deep Forest doesn’t attempt to hide its progressive political agenda. If you cannot abide an agenda, this is not the game for you.

If, however, you are fed up with destructive fantasy tropes that get reiterated in RPGs all the time, or you just want to experience a radically different interpretation of what a roleplaying game can be, give The Deep Forest a try. Be a monster. Rebuild your civilization. Discover something cool.

RIP: Archyx the Kobold. His only crime was having more fingers than hit points.
Remember, if they don’t have a flag, they aren’t really civilized.