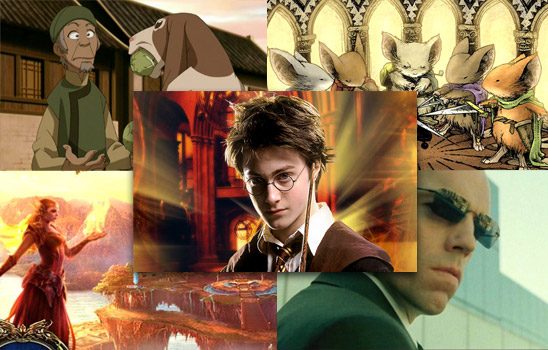 Happy Holidays! To tide you over while you hide from your relatives in the guest bathroom, here are the best reads of the year.

These are the articles that got the most eyeballs, because of their animal magnetism, and because people shared them.

Storytellers want to have their cake and eat it too, even if the cake is absolute perfection, and the eating is relatable flaws. The inevitable result of trying to have it both ways is a character that defies human nature. These characters have traits that … read more »

The Mouse Guard roleplaying game is based on a comic book series of the same name by David Peterson. The basic premise is mice with human level intelligence trying to protect their fragile civilization from all that threatens it. I have never read the comics. But I love this game. Read more »

The Best Quotes From GeekGirlCon

The Mythcreants had a great weekend at GeekGirlCon in Seattle. I want to share my favorite quotes and a few comments on the panels I attended. Also included are some pics I got by nervously asking cosplayers to take their picture. Next time I’ll do … read more »

Casual games have a secret. Many feel more like the adventure and roleplaying games of the eighties and nineties than Bejewelled. Not only that, but these days they have far more artistic details than their pixelated ancestors. These games are a trove of inspiration (and … read more »

The Best Quotes From My PAX Weekend

Five Characters That Are Too Powerful

Creating a spec fic character isn’t always like creating characters in other genres. One of the unique challenges we face is preventing our characters from becoming too powerful – and dealing with them when they do. But what exactly is too powerful? Read more »

Five Broken Abilities From The World Of Darkness

In gaming, an ability is defined as overpowered if it is more powerful than it should be. How you decide that can be tricky, but it usually boils down to an ability being stronger than other powers of the same cost or level. Three ranks in … read more »

How to Create a Simple Language

Creating your own language probably brings to mind Tolkien’s Elvish languages or Marc Okrand’s Klingon. Most of us, though, aren’t scholars and linguists like Tolkien and Okrand. Don’t worry. You don’t need to be to add some linguistic depth to your worldbuilding. Creating a relatively simple naming language can do the trick. Read more »

The idea of a campaign that takes place almost entirely in one area is a strange one to many game masters. A stationary story presents a list of new demands on the GM, but it also creates new opportunities. It allows the players to really … read more »

A cliché is usually defined as “an overused phrase or expression.” How much use is overuse? 42. While this is wonderfully objective, it neither clarifies which phrases people are referring to, nor explains what’s wrong with using them often. Read more »

These hidden gems weren’t read by everyone, but those who did really liked them.

Making Interesting NPCs on the Fly

Your players will spend a great deal of time interacting with the non-player characters. The unpredictable nature of running an adventure means that you will be improvising NPCs as often as not. Fortunately, making them up on the spot becomes easy with practice. Read more »

The Six Traits of Strong Characters

What if you make up 20 pages of backstory, and your character still doesn’t feel “strong”? How can you even tell? I’m going to turn the subjective quality of “strength” into clear benchmarks by detailing six traits that strong characters have in common. Read more »

Here I’ll explore the philosophical paradigm that overlays our understanding of how synergistic behaviors are maintained in an ethical society. Just kidding. This is about fans, known as shippers, that really want non-existent people to get it on. P.S. Our bills are paid by our … read more »

Spinach and Candy have waged a war over every character you’ve ever loved. Candy has been loudly launching grenades at spinach, while spinach tries to infiltrate the candy base and steal their flag. Not only is the fate of the character at stake in these … read more »

How to Talk About Dark Stories

Games of Thrones is dark; Disney’s Cinderella is not. Few would disagree, and many could choose confidently between them without knowing more. That’s why it’s practical to make recommendations based on how dark a story is. It’s easy to gauge, and many people have a … read more »

How Metagaming Can Improve Your Campaign

One of the more frustrating habits a roleplayer can have is metagaming too much. The frequent metagamer can alienate the game master and other players if they start to feel that the metagamer is so concerned with winning that they are no longer playing in … read more »

Should You Put a Ring on It?

Are you making a fantastic world, or an alternate Earth? Do you like it? In the words of a wise woman: you should put a ring on it. Well, maybe. As anyone with a non-single marital status can attest, rings have consequences. P.S. Our bills … read more »

Have a happy New Year!