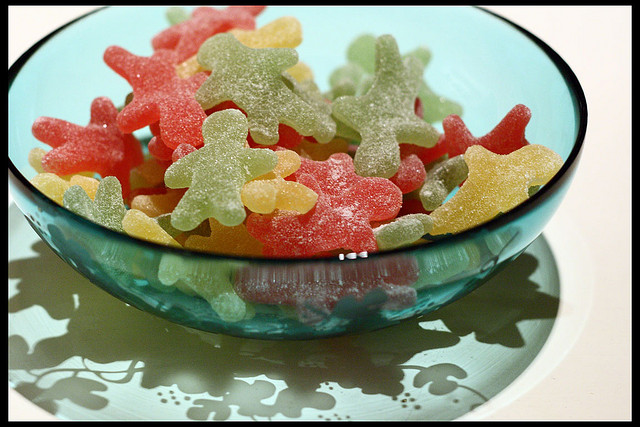 Spinach and Candy have waged a war over every character you’ve ever loved. Candy has been loudly launching grenades at spinach, while spinach tries to infiltrate the candy base and steal their flag. Not only is the fate of the character at stake in these battles, but so is the tone of the story, and the audience’s interest in the story’s outcome.

What I am talking about here? Let’s pretend for a second that we’re reading a story about a girl named Jane. Maybe Jane is a good person, maybe she isn’t, what matters is that Jane is a person we’re rooting for. We want her to succeed.

Candy is any story element that glorifies Jane. She may or not know she’s being glorified. It’s not for her; it’s for the readers cheering her on.

Candy wins against spinach when:

Spinach is any story element that humiliates Jane. It doesn’t have to be embarrassing for her, although if she knows about it, it’s going to be a disappointment or a sore spot. Sometimes it’s just a reminder for the audience that she’s only human, or cyborg, or whatever she is.

Spinach wins against candy when:

Spinach and candy are indicators of Jane’s value as a person, as perceived by the audience cheering for her. If she has no faults but goes through pain and suffering, candy still wins because she isn’t any less perfect – just unhappy. On the reverse side, let’s say Jane thinks she’s a fabulous chef, but everyone in town only pretends to like her cooking because they feel sorry for her. She may be very happy and carefree because she doesn’t know, but the audience knows, and spinach has triumphed.

Storytellers often try to balance a candied character by throwing in hardship. It helps, but it will never quite do the job. Only spinach can defeat candy.

Every time we turn a page or watch an episode we’re hoping candy will sneak past the spinach defenses and gain the upper hand, if only for a moment. We live vicariously through Jane, so that candy is just as sweet as if we ate it ourselves. But we need spinach to hold its own too. A strong showing from spinach makes Jane an underdog, which is one of the reasons we like her. Without spinach, she couldn’t aspire to be someone better than she is today.

Now I’m going to summarize some real warfare. Here’s the Battle for Harry Potter at the beginning of Sorcerer’s Stone:

Harry’s not even in the scene but the battle is already on: McGonagall mentions how he, just a baby, destroyed the evil villian! It’s an astounding early victory for candy, ladies and gentlemen. And candy’s not even done! He has a cool-looking scar and he’s famous. People everywhere are talking about how awesome he is! The battle could be over before it’s even begun.

But look — spinach is pulling out the big guns: an emotionally abusive family. Harry’s now surrounded 24/7 by people who will remind him of just how inferior he is. He has no friends to counteract them, and he’s pretty funny looking with his knobby knees and dorky clothes. What a recovery! Spinach hasn’t entirely taken over though, what we have now is the special underdog, an ideal starting place for a battle.

It’s a long hard slog after this, but candy slowly erodes spinach’s defenses. It starts with the announcement that he’s a wizard — a weak attack, the audience already knows. But then we hear more about his defeat of Voldemort, and he’s taken to the Leaky Cauldron, where everyone wants to shake his hand! Spinach tries to fight back by introducing Draco to make Harry feel out of place, but then candy retaliates by bringing in Ollivander to comment on how “great things” are expected of him.

Candy gets in a few good volleys at school too: Draco tries to befriend him, and the sorting hat is very impressed with his talent and mind. But wait – here’s spinach with an appearance by Snape, the biased teacher, and he makes sure Harry is ridiculed in front of his class. Candy is really pushing for flying lessons, what is it up to? Wow – Harry is a natural at the broom, and… I can’t be seeing this right… he’s the youngest Quidditch player in a century, in the position that always determines the outcome of the game!!! It’s an overdose, ladies and gentlemen, an overdose! What a victory for candy!

Rowling throws the battle back and forth a lot, which is effective in keeping readers on the edge of their seats. But overall, she has a sweet tooth. Though the ideal balance between candy and spinach is probably a matter of taste, its generally better to err on the side of spinach.

Too Much Candy Makes You Sick

Candy tastes great, so it’s easy to over-indulge. But the more you have, the less enjoyable it becomes. Eventually, you just feel sick and disgusted. Fanfic has gained a reputation for having way too much candy, and so many of our best examples of this are fanfic parodies.

In the Buffy episode Superstar, the minor character Jonathan has cast a spell to give himself all the candy:

Buffy: “Well, I was just kind of wondering if maybe anyone else thought that Jonathan was kind of too perfect?”
Xander: “No, he’s not. He’s just perfect enough. He crushed the bones of the Master, he blew up a big snake made out of Mayor, and he coached the US Women’s soccer team to a stunning World Cup victory.”
[…] Buffy: “And how did he graduate from med school? He’s only 18 years old.”
Xander: “Effective time management?”

In the Girl Genius short comic Fan Fiction, the Mary Sue character Maria Antonia Fantasia Philomel abruptly enters the story when the heroes are in need and saves the day:

Bill: You’re as bold and beautiful as you were the day we rescued you from the bandits who kidnapped you — after your mysterious yet famously powerful Spark tribe was completely wiped out, leaving you the only heir to its secrets!

Maria: Oh, enough about my tragic past! (I was also a princess!) All that matters now is that I rescue you — with this ice ray I happen to have just invented!

When candy is winning over the central character of the story, the audience is more likely to defect and get really attached to the side characters that are still underdogs. Buffy herself is short on spinach. She may go through trials and tribulations in the series, but as a character she is a greatly admired, has amazing skills, and rarely makes an important mistake. This is probably one of the reasons many fans prefer Spike, the lovelorn, downtrodden vampire.

Too Much Spinach Isn’t Any Fun

For obvious reasons, storytellers don’t overdose on spinach very often. But when they do, it saps the enjoyment out of a story, and becomes pretty depressing.

The main character of the series, Fitz, has cool powers, but he never succeeds at ANYTHING. There is no real candy, not ever. I just saved you a week spent desperately searching for it. You can thank me later.

Since spinach increases the appetite for candy, the audience may stick around for a surprisingly long time hoping they’ll be thrown a chocolate bar or at least a jelly bean, but after they finally get fed up, they won’t come back.

In the End, Candy Should Triumph

Assuming you want a happy or at least satisfying ending for your tale, candy should make a knock-out blow to spinach during the climax — but never before. Many storytellers start with a healthy dose of spinach, but by halftime are serving exclusively candy. Spinach should hold its own up to the ending, so victory is that much sweeter.