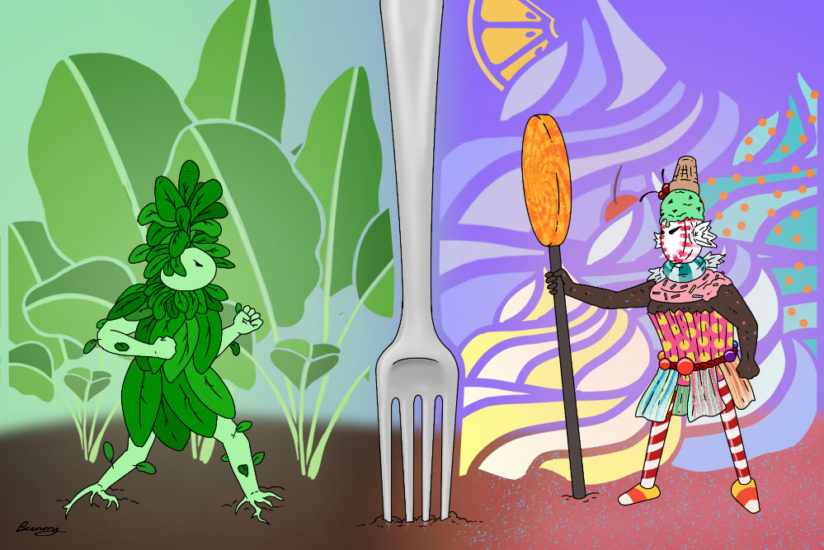 The first terms I coined at Mythcreants were “candy” and “spinach,” featured in a 2013 article I wrote before the website had even launched. After spending years trying to predict which novels I would finish reading, I’d found that a general pattern of character properties were the best indicators. Because they were so cumbersome to describe directly, I gave them symbolic names based on food. Candy is enjoyable, but too much makes you sick. Spinach is good for you, but it’s not much fun.

Nine years later, candy and spinach sound a little silly, but they’re still a handy way of discussing character portrayal. They represent a common point of contention between readers, demystify some frequent mistakes by writers, and are related to other important character concepts like likability and karma. Silly or not, candy and spinach have a huge impact on who enjoys a story and how much.

While useful, these concepts have always been tricky to explain, so many people have gotten them wrong. With hindsight as my guide, it’s time for an updated explanation of what they are and why they matter. However, you can still read the original article via PDF.

What Are Candy and Spinach?

Candy is anything in a story that glorifies a character. A character that has lots of candy is called a candied character, and if it’s too much, the character is over-candied.

Spinach is anything in a story that humbles a character. It is candy’s opposite and the principal cure to a candy overdose. However, while less common, characters can also have too much spinach. A character with lots of spinach is a spinachy character.

While glorifying or humbling a character could mean lots of different things, candy and spinach often appear in similar ways.

What Candy and Spinach Are Not

How Do They Affect Enjoyment?

At Mythcreants, we measure a story’s ability to engage its audience by assessing four factors called ANTS: attachment, novelty, tension, and satisfaction. Attachment is how emotionally invested the audience is in the story. Compared to the other ANTS, attachment is the most long lasting, and a story’s characters are the biggest factor in generating attachment. This is why when I was looking to predict what books I would finish in my early years, I focused on traits of the main character. If I was attached to the main character, I would continue the story even if it got boring.

For many storytellers, candy and spinach present a big dilemma. A person who is already attached to a character generally wants that character to get candy, not spinach. Candy provides wish fulfillment, and it can be lots of fun. For the audience members that can instantly bond with a character, lots of candy may be really attractive. These are likely to be people who are similar to the character in important ways and identify with them. In addition, some audience members are more naturally inclined toward candy than others.

However, for a broader audience, lots of candy will prevent attachment from forming in the first place. In fact, it will turn many people against a character. One of the biggest reasons for this is character karma.

Character karma is one of the basic laws that underlies how people respond to stories. When a character faces hardship but deserves better, that character gains good karma. This means the audience starts rooting for them to succeed. In other words, the character is a sympathetic underdog, and they’re more likable as a result. This builds more attachment for a character, especially from a broader audience that may not see themselves in that character.

On the other hand, when a character succeeds without doing enough to earn that success, they gain bad karma. Because they’re always showing up more hardworking people, many audience members will start rooting against them. In likability terms, they are often perceived as an arrogant character who needs their ego deflated.

Over-candied characters don’t just succeed, they succeed easily. They never have to work hard to earn their success, because they are inherently bestowed with all the talents and traits they need. Then, they are continuously rewarded for their good luck. Storytellers do this because it provides the most wish fulfillment. It feels good to be inherently awesome, secure in the knowledge that this awesomeness can never be taken away. But for people who want the character to prove themself, this is a recipe for bad karma.

It’s the spinachy character that works hard and struggles their way through challenges. It’s not their fault that they were dealt such a poor hand at birth. They didn’t decide to have dull hair or trouble learning how to swing a sword. And not only do spinachy characters usually deserve better, gaining sympathy and good karma, but their life experiences are also more relatable. Most of us are more likely to describe ourselves as average looking than having golden hair and violet eyes. For these reasons, spinach usually encourages attachment.

As I mentioned above, people who are already attached to a character generally want that character to get candy, not spinach. The problem is that storytellers often fall in this category. They’ll give their favorite characters lots of candy because it feels good to them, and they won’t realize that their audience is coming from a different place. If you’ve discovered a character in your story has too much candy, I have an article on correcting this with minimal heartache.

Some storytellers want to feed their character all candy and no spinach, but they know their audience expects a character with more humility. This is what causes the phenomenon of fake spinach, in which a storyteller tries to make it look like a character has spinach when they don’t. Sometimes, fake spinach is even candy. For instance, in Fifty Shades of Grey, Anastasia bemoans that her blue eyes are too big. Inventing traits that are candy yet somehow marginalized in the setting, such as stigmatized magic, is another way of accomplishing this.

To be clear, wish fulfillment is not a bad thing; it’s good. Many people have tough lives. If you can give everyone joy and validation by telling them a story, do it. The issue here isn’t that there’s too much wish fulfillment. It’s that the people who aren’t attached to a candied character don’t get to experience that wish fulfillment; they only get the resentment of putting up with the storyteller’s pet character.

The best way to deliver wish fulfillment to a broader audience is to give the main character more spinach to start. The main character is the person the audience is most likely to get attached to, and giving them spinach will further encourage attachment. Then, as the story continues, you can slowly increase the main character’s candy, particularly if they work hard to earn it. Maybe after they almost die from fighting a monster, they win a medal and get a cool scar.

This doesn’t mean a main character shouldn’t have any candy to start. A main character that has nothing but spinach will create a gloomy experience, especially as the story continues. A little candy will show the audience why this person is the main character and promise them more enjoyable moments to come. So go ahead and give your character shining hair, a special talent for magic, or a mystical birthmark. It’s simply about balance.

How We Apply a Double Standard

When we analyze candy and spinach in media, we need to understand the current double standard that is applied to characters based on their level of privilege. As I mentioned above, people are more likely to identify with characters that are a lot like them. Then, if they see themselves in a character, the wish fulfillment that candy provides is more likely to work.

Since we live in a society controlled by white men, where the dominant narrative about stories is set by white men, white male characters with lots of candy are often celebrated, while other characters with that much candy are torn down. This is why even though candied men are more prevalent in big-budget stories, the best-known term for candied characters – Mary Sue – specifically targets women.

This is also why Mythcreants will never stop making fun of Kvothe from The Name of the Wind. Below is a list of the candy Kvothe gets in the first fifty pages of the book, which is only the story’s framing device.

The Name of the Wind is a bestselling book that has won four awards. The unfinished trilogy it is a part of, The Kingkiller Chronicle, has been praised by famous authors like George R. R. Martin, Brandon Sanderson, Ursula K. Le Guin, Anne McCaffrey, and Michael Chabon.* The story of Kvothe has received veneration that few books enjoy, while similar portrayals of women are laughed off as cheap stories about Mary Sues.

But that’s not all. These double standards also operate on the other end of the candy-spinach spectrum. White male protagonists are allowed to have more spinach than marginalized protagonists. This makes the character more relatable to a white male audience, and people will assume he needs no other skills or qualifications for being a hero.

A good example is Emmet from the 2014 The Lego Movie:

As the story continues, Emmet does build the skills he needs to save the day. But for quite a long time, the movie provides viewers with little reason why Emmet, among all the people in the setting, should be the hero.

At Mythcreants, we generally recommend a balance between candy and spinach, with more spinach at the start and more candy at the end. But, as with many things, we shouldn’t forget the nuances of this topic.

As storytellers, the best thing we can do is be aware of what we’re putting into our stories and make intentional choices. That way we don’t subconsciously give a favorite character more candy than we intend, only to face a rude awakening later. No one wants their beloved character to be hated by their audience.

Chabon was also the edgy showrunner of season 1 of Picard.