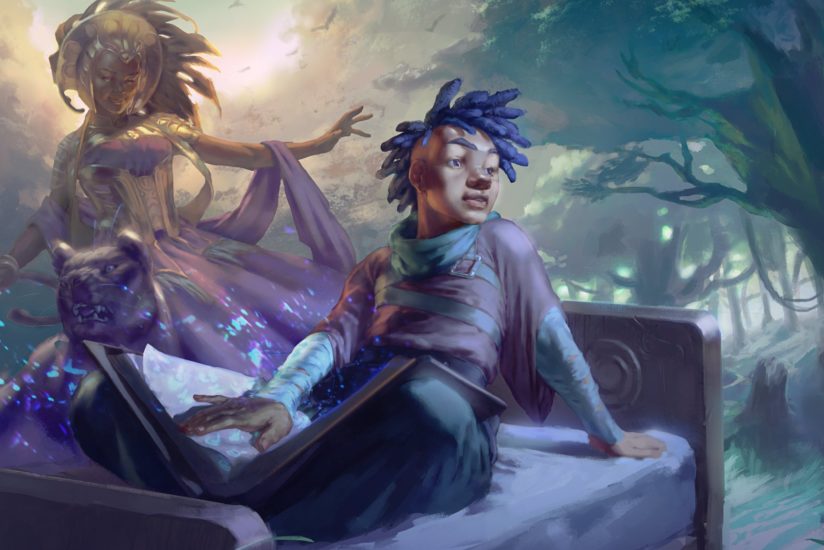 Path of Ancestry by Julio Reyna

Last time, we started our ancestry ranking by looking at the bottom five entries and all the options that didn’t make the cut. This week, we’ll finish the list with the final five entries.

A note on attributes: As of Tasha’s Cauldron of Everything, all ancestries can switch their attribute bonuses around however they like. It’s technically an optional rule, but in the same way feats and multiclassing are “optional,”* so I’m assuming that the GM allows it for this ranking. If your GM doesn’t allow that rule, then ancestries with preexisting flexible bonuses will be comparatively more powerful.

Hellish Resistance. You have resistance to fire damage.

Winged. You have bat-like wings sprouting from your shoulder blades. You have a flying speed of 30 feet while you aren’t wearing heavy armor.

Languages. You can speak, read, and write Common and Infernal.

We all knew something with wings was going to find its way onto this list. However, after reviewing all the available options, it wasn’t the well-known aarakocra or the newly released fairy. Instead, we have the winged tiefling from the mostly forgotten Sword Coast Adventurer’s Guide. The main difference between this ancestry and other fliers is the ability to wear medium armor while taking to the skies. The aarakocra used to have a speed advantage, but that was removed in the new Monsters of the Multiverse.* This leaves the winged tiefling as the best flight option.

On top of the strongest movement type, tieflings have a strong secondary bonus: resistance to fire damage. Fire is one of the most common damage types used both by and against players. Whether you’re fighting a red dragon or weathering a misplaced friendly Fireball, halving all fire damage is very useful. The winged tiefling soars into fifth place.

Githzerai Psionics. You know the mage hand cantrip, and the hand is invisible when you cast the cantrip with this trait.

Mental Discipline. Your innate psychic defenses grant you advantage on saving throws you make to avoid or end the charmed and frightened conditions on yourself.

Psychic Resilience. You have resistance to psychic damage.

Out of all the entries on this list, the githzerai was the only one that surprised me. Prior to Monsters of the Multiverse, I considered this ancestry to be a strict downgrade from anything that had Magic Resistance, since that ability used to give advantage on nearly every save in the game. However, now that Magic Resistance has been narrowed to only work on spells and not “magical effects,” the githzerai can shine. Mental Discipline might only work on saves against two conditions, but those conditions are incredibly common and often come from non-spell abilities, such as a dragon’s fear aura.

But wait, there’s more! The githzerai also get access to Shield, one of the strongest spells in the game. This feature not only allows a free use of Shield, but you can also use your spell slots for additional casting. This is obviously a great boon to any caster build that didn’t dip into sorcerer, wizard, or hexblade. Finally, you get resistance to psychic damage. This isn’t a super useful resistance, but when added to everything else this ancestry gets, it doesn’t take a psychic to know this ancestry gets fourth place.

Darkvision. You can see in dim light within 60 feet of you as if it were bright light and in darkness as if it were dim light. You discern colors in that darkness only as shades of gray.

Magic Resistance. You have advantage on saving throws against spells.

Poison Resilience. You have advantage on saving throws you make to avoid or end the poisoned condition on yourself. You also have resistance to poison damage.

Serpentine Spellcasting. You know the poison spray cantrip. You can cast animal friendship an unlimited number of times with this trait, but you can target only snakes with it. Starting at 3rd level, you can also cast suggestion with this trait. Once you cast it, you can’t do so again until you finish a long rest. You can also cast it using any spell slots you have of 2nd level or higher.

Intelligence, Wisdom, or Charisma is your spellcasting ability for these spells when you cast them with this trait (choose when you select this race).

While Monsters of the Multiverse was a boon to many ancestries, the Yuan-Ti did not fare as well. Spell Resistance was downgraded to only work on spells, and poison immunity became simple resistance. However, even this weakened Yuan-Ti is a force to be reckoned with. Spells are, as you might imagine, some of the most dangerous obstacles a party can face, and advantage against all of them is very good.

Poison resistance, as I have mentioned in earlier entries, is one of the best damage types to be resistant to, making up a lot of low-level enemy and trap damage. The Yuan-Ti’s excellent defenses make it a great choice for any frontline build, whether it’s shoring up the fighter’s weakness to spells or complementing a paladin’s Aura of Protection. The Yuan-Ti is even better if the GM likes making you fight snakes or if they’re open to creative interpretations of the Suggestion spell. Third place to the sneaky snake.

Lucky. When you roll a 1 on an attack roll, ability check, or saving throw, you can reroll the die and must use the new roll.

Brave. You have advantage on saving throws against being frightened.

Halfling Nimbleness. You can move through the space of any creature that is of a size larger than yours.

Languages. You can speak, read, and write Common and Halfling.

Ever Hospitable. When you make a Charisma (Persuasion) check or an ability check involving brewer’s supplies or cook’s utensils, you can roll a d4 and add the number rolled to the ability check.

Innkeeper’s Magic. You know the prestidigitation cantrip. You can also cast the purify food and drink and unseen servant spells with this trait. Once you cast either spell with this trait, you can’t cast that spell with it again until you finish long rest. Charisma is your spellcasting ability for these spells.

Spells of the Mark. If you have the Spellcasting or the Pact Magic class feature, the spells on the Mark of Hospitality Spells table are added to the spell list of your spellcasting class.

I think we can all agree that spells are pretty strong in 5E. With that in mind, it’s not much of a stretch to believe an ancestry that grants a total of 12 additional spells is pretty good. However, it’s the quality of those spells that sets this particular dragonmark ancestry apart from the competition.

The first and most powerful spell on this list is Goodberry. When combined with the 1st-level Life cleric Disciple of Life feature, Goodberry can be used to output a staggering amount of healing between fights.* Normally, Goodberry needs to be acquired by dipping one level into druid or two into ranger. Now you can do it without spending any levels.

The good spells don’t stop with Goodberry either. Sleep is a premier control spell for low-level play, Aid is a powerful health boost at all levels, and Tiny Hut is great for keeping the party safe during rests. This ancestry is at its best on casters, especially those that can fit a level of cleric into their build, granting powerful additions level after level. Second place to the hospitable halfling.

Languages. You can speak, read, and write Common and one extra language of your choice.

Skills. You gain proficiency in one skill of your choice.

Feat. You gain one feat of your choice.

Feat. You gain one feat of your choice for which you qualify.

Variable Trait. You gain one of the following options of your choice: (a) darkvision with a range of 60 feet or (b) proficiency in one skill of your choice.

Finally, we reach the end of this list, and, sadly, there was no surprise entry to unseat the reigning champions. I’m grouping variant human and custom lineage together, as they share the same primary strength: a free feat. Simply put, feats define many builds in ways that rival or surpass class features. Most martial characters need at least two feats before their damage comes fully online, and casters always want at least one feat as well.

The problem is that most characters will receive a maximum of five feats, assuming they make it to 20th level, and those feats are competing with attribute increases, a very strong boost in their own right. Getting a free feat at 1st level when everyone else needs to wait till 4th is an irresistible bonus for most builds.

The reason I awarded this spot to both ancestries instead of picking just one is due to a key difference when deciding which is the right option for a specific character. It all comes down to how these two options assign their attribute scores.

Variant humans grant two +1s, meaning you can start with a 16 in your main and secondary attribute. On the other hand, Custom Lineage grants a single +2, meaning that if you take a complementary half feat you can begin the game with a single 18. Whether or not a build can make good use of a half feat is the deciding factor between which of these two options is better. First place goes to the blandest and the strongest of ancestries.

When I heard that Monsters of the Multiverse was rebalancing various ancestries, I was hopeful that either widespread power increases or targeted reductions would bring the first place winners down a notch. Unfortunately, the designers decided to target what used to be the second-best options of satyr and yuan-ti, leaving variant human and custom lineage untouched. Here’s hoping the next edition brings a bit more ancestry variety to optimized builds.

Also, all rules are optional in RPGs.
I will not be using the book’s full name unless it’s absolutely necessary.
40 HP per 1st-level casting, plus 10 per slot level after that.
Jump to Comments

Comments on The Best Ancestries in D&D 5E, Part 2