Striking an End Note That Resonates 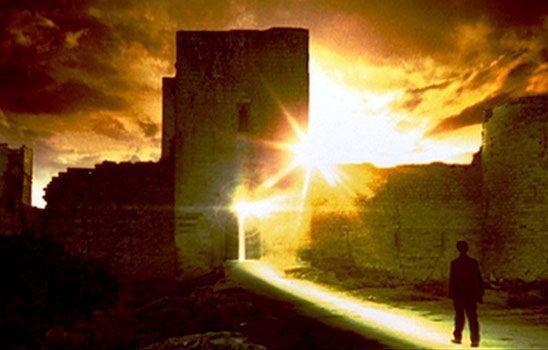 The ending of The Ninth Gate resolves the story, emphasizes the theme, and adds a new hook.

Writers frequently obsess over their opening paragraph, hoping to make a great first impression. But the last impression also matters. It sets the mood that the reader walks away with, giving it a disproportionate impact on how they feel about the story or whether or not they recommend it to their friends.

Luckily for writers, crafting good closing sentences is not as hard as making a strong beginning. The closing note has more options and is more forgiving of mistakes. Let’s look at what you should consider when bringing your last scene to an end.

The Functions of a Great End Note

Like the opening, the ending lines can accomplish different tasks. Which tasks you should focus on depend on your priorities and the type of story you have.

Every ending must bring the story’s primary conflict to a close. If it doesn’t, the story simply isn’t done. Abruptly ending your work before the story is concluded will not make readers happy with you. However, as long as you’ve clearly resolved your story, you don’t have to focus on it in your last line.

Many writers still choose to. That’s because emphasizing the story’s resolution gives the reader a feeling of satisfaction. If that satisfaction is the primary thing you want readers to walk away with, your throughline is your friend.

And as long as you know what holds your story together, it’s not hard. (If you don’t, figure that out before you do anything else with your story. There’s more info here, here, and here.) I’ll show you some endings that get the job done.

The Harry Potter series is driven by the threat that Harry faces. Rowling uses her ending to assure readers that the threat is over. She closes the main story with Harry saying, “I’ve had enough trouble for a lifetime.” Similarly, the epilogue ends with “The scar had not pained Harry for nineteen years. All was well.”

Lois McMaster Bujold’s The Hallowed Hunt focuses on the relationship between her hero and heroine. This is her ending:

Ingrey yipped in mock-dismay, and was graced with her fairest laugh yet. The sound lifted his heart like the promise of dawn, in this longest night of the year.

Arm in arm, they descended the snowy steps.

Anne McCaffrey’s Dragonsong and Dragonsinger are about Menolly’s quest to become a harper. Here’s how the latter book ends.

Now, holding her head high, while the first lizards swept in from the windows, trilling their happy reaction, she walked between Telmor and Sebell to the oval tables of her new station in the Harper Craft Hall of Pern.

Emphasizing the Story’s Theme or Mood

If your story has a strong atmosphere, you may choose to focus on that. This is great for gritty noirs, cosmic horror, and other heavily themed works. Emphasizing the mood in your ending ensures that the reader will walk away with the unique and striking impression you want your work to represent.

This is done through a variety of methods. Many writers have beautiful, heartfelt prose or imaginative description at the end. Neil Gaiman is the king of atmosphere. He ends his novel The Ocean at the End of the Lane with a fleeting image that is close in theme to the fleeting memory that encompasses the entire story.

Perhaps it was an afterimage, I decided, or a ghost: something that had stirred in my mind, for a moment, so powerfully that I believed it to be real, but now was gone, and faded into the past like a memory forgotten, or a shadow into the dusk.

Others will repeat a pretty bit of poetry that was used earlier to frame the story, such as a song or prophecy. Here’s the ending of Meredith Ann Pierce’s The Darkangel Trilogy, which is a song about the protagonist.

For love of one above who, flag unfurled,
alone must stand,
The pearl of the soul of the world
alone in her hand.

When Winterock to water,
falls flooding, foes to drown,
Ravenna’s own daughter
shall kindle the crown.

Bringing back the opening premise for a guest appearance can also work. However, make sure that it fits your closing. In Stephanie Meyer’s Twilight, the relationship between Bella and Edward evolves significantly. Meyer ends with a line that emphasizes the original premise, but it feels out of place because so much has changed. Compare that with the earlier books of Jim Butcher’s Dresden Files, where Harry Dresden ends in the same situation he started in. That’s why the first book does well by closing with this premise:

My name is Harry Blackstone Copperfield Dresden. Conjure by it at your own risk. When things get strange, when what goes bump in the night flicks on the lights, when no one else can help you, give me a call.

If the story is humorous, a joke is a great way to end. Take the closing of John Scalzi’s Redshirts.

[Dahl] still had work to do, surrounded by his friends and the crew of the Intrepid.

And that’s just what he did, until the day six months later when a systems failure caused the Intrepid to plow into a small asteroid, vaporizing the ship and killing everyone on board instantly.

No, no, I’m just fucking with you.

They all lived happily ever after.

You’d think the very end of a story would be a weird place to introduce a new question or problem, but as long as the important threads in the story have been resolved, it works. However, adding a new thread won’t provide the satisfying end that many readers expect, so you need a good reason for it.

If your story is a horror or thriller, ending with an open hook is a great way to continue the suspense your readers enjoyed during the story. If you have a sequel work, introducing the central problem of your next work at the end can effectively draw readers to it without using the hated cliffhanger.

New hooks can vary quite a bit in their urgency or subtlety. Using an urgent hook might compel some readers to pick up your next book, but others might be upset that they felt anxious rather than satiated at your story’s end.

The Golden Compass is the first in Philip Pullman’s His Dark Materials Trilogy. He resolves the main plotline of The Golden Compass at the end – the disappearance of Lyra’s best friend. But Lyra still has a long journey ahead of her. Here’s his ending note.

She turned away. Behind them lay pain and death and fear, ahead of them lay doubt, and danger, and fathomless mysteries. But they weren’t alone.

So Lyra and her daemon turned away from the world they were born in, and looked toward the sun, and walked into the sky.

This is a pretty urgent thread, but even as Pullman creates the hook, he softens it to provide a greater feeling of closure. He emphasizes that Lyra isn’t alone and includes bright imagery of the sky.

Twilight ends with Bella and Edward in disagreement over whether Bella should become a vampire. This isn’t urgent enough to anger readers, but it still provides a good teaser for the next book.

How Much Epilogue to Include

The epilogue is everything after the throughline has been resolved. Sometimes the entire epilogue is separated off in its own section called “Epilogue,” sometimes part of it is, or sometimes it’s grouped in with the main text of a work. Regardless of what you call it or where you put it, your epilogue content has a strong impact on your story’s closing impression.

The purpose of epilogue content is to satisfy reader curiosity and slowly wean them from a story they could be emotionally addicted to. If your story is long, there will be more characters and minor plot threads for readers to wonder about. Readers are also much more likely to be emotionally invested in a longer work, making them feel cheated if the book cuts out right after the resolution.

Andy Weir’s The Martian focuses closely on the man character as he struggles to stay alive on Mars and then ends as soon as he reaches safety. Readers are robbed of the opportunity to see him reintegrate into society or enjoy any of the fame he earned. For that reason, the movie wisely added an epilogue that wasn’t in the book.

However, the content in an epilogue will always be less impactful than the resolution of the story. Adding epilogue means your closing lines will pack less punch. That’s why very short stories rarely have an epilogue. Short stories need an ending line that resonates; it might even contain a stunning reveal, like in Philip K Dick’s Beyond Lies the Wub. As long as this reveal closes any important threads that are open, the story doesn’t have to depict how characters adjust to the reveal or what effect the reveal has on the world. In a novel, readers would expect that information.

One of the most commons mistakes with endings is to let them fade away to a quiet whimper. Even if you include a long epilogue, your last sentence should be stronger than the paragraphs before it. What makes it strong? Performing the task you want your ending to accomplish. Generally that means emphasizing the resolution, representing the work as a whole, or summarizing a new hook. For instance, the last sentence of The Hunger Games series, “There are much worse games to play,” is a strong callback to the premise.

In Pride and Prejudice, Jane Austen uses her epilogue (everything after Elizabeth and Darcy get engaged) to describe how their families and other important actors receive the news. But she brings her ending line back to their happy status as a couple.

With the Gardeners, they were always on the most intimate terms. Darcy, as well as Elizabeth, really loved them; and they were both sensible of the warmest gratitude toward the persons who, by bringing her into Derbyshire, had been the means of uniting them.

Symbolism can help make your last line powerful. If your story ends with two warring factions making peace with each other, one leader taking the other’s hand for a shake might be a great ending. To represent your character’s newfound freedom, you could have a moment where they let a bird out of a cage and watch it fly into the distance. To represent a new beginning, you could narrate how flowers grow over old ruins.

If your ending line feels weak and you’re not sure what to do instead, just look at all the text in the preceding paragraphs. There’s a good chance something in there would make a great closing.

And as for any important line, don’t let it ramble. Trim out words it doesn’t need so the rest stands out better.

Endings can be a great exercise in understanding the heart of your work and communicating that to readers. Even though they perform important functions, they still have room for creativity. That’s why they’re so much fun.