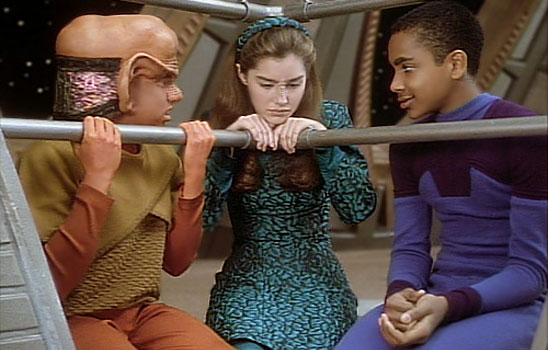 The friendship between Jake and Nog is interesting because of their cultural differences.

Culture encompasses almost everything we do. Language, religion, and social structure all shape and are shaped by the prevailing culture. The cultures you create for your worlds will make a permanent imprint on the thoughts, feelings, and behavior of the people in them. With so many strands in the web, it can be hard to get started.

But it doesn’t have to be. These three steps will give you a solid foundation for the new culture you’re creating.

1. Go Over the Facts

Culture starts with practical necessity, then learns and grows from experience. Knowing the history of your society and how it operates will give you insight into how you should shape your culture. In particular, ask these questions about the groups in your world:

What Are Their Primary Economic Activities?

Whatever they do to put food in their mouths will dominate their thoughts. If it doesn’t, that’s a remarkable thing in itself. If your society is agricultural or sea-fairing, they’ll probably be preoccupied with the weather. If it’s industrial, pay and promotion will be central to their lives. Think about the skills and wisdom people need to succeed – those traits will be important in their culture.

How Isolated Are They?

How Often Do They Go to War?

If your culture isn’t isolated, war might be a normal part of their existence. Some cultures, like the Mongols or the Spartans, fashioned themselves around war. These cultures will value warriors. Others just send farmers to shake sticks at each other during the off season – war might sound glorious, but the common person cares more about their fields. A wealthy civilization might send mercenaries in their place, labeling warriors as savages.

If your society isn’t isolated but rarely goes to war, what tactics do they use to protect themselves? Do they play other nations against each other, or do they just submit to their most powerful neighbor? The answer will tell you a lot about how they solve conflicts in general.

Societies that begin in one place and end in another will carry echoes of their past along with them. Perhaps they were a deviant offshoot of a society that persecuted them, and their culture has become a reaction against their former oppressors. Perhaps they regularly migrate around the world, adopting newcomers and incorporating some of their practices.

Now that you know what parts of your culture have been shaped by their outside environment, it’s time to look at what’s important to them. Human and human-like cultures must decide where they stand on the following:

Your culture might be individualistic. If so, they’ll give single people the freedom to make their own choices based on their personal happiness. Or your culture could prioritize the welfare of a group, such as the nuclear family, the extended family, a small community, or the entire nation. In these cases, a person’s role in the group is more important than their individual identity. When it’s time for a young person to enter a career or get married, do they decide, or do the leaders of their group decide for them?

Similarly, are members of your society expected to compete for the highest honors? Or are personal achievements considered secondary to their ability to fit in with a group and contribute to a team? If you had one prize and two people who might receive it, would they fight over it or insist the other should get it? The answer will tell you how acceptable boasting is, and whether polite behavior is rare or required.

Often referred to as “guess versus ask,” a culture might communicate using subtle implications, or by explicit and direct statements. If a host signals that it’s time for guests to leave by clearing away the dishes, your culture prioritizes courtesy. If it’s normal for people on a first date to start by discussing their expectations for their night together, your culture prioritizes clarity. People in a courtesy culture are expected to know all the social nuances they should follow. Speech is used less to communicate information, and more to establish and maintain relationships. People in a clarity culture think statements speak for themselves, and they expect anyone who is unhappy to make their discomfort known.

How hierarchical is your culture? Is it acceptable for people to question authority? Do they respect or resent those who are higher on the ladder? If equality is important to your culture, you’ll want to define what that means. Equality could mean that everyone is allotted the same money and resources, or it could mean that everyone is given the same opportunity to earn those money and resources. Perhaps it just means the law treats everyone the same.

Your culture probably has some degree of hierarchy. If so, decide who holds the reins. Is your culture a patriarchy or matriarchy? Are elders revered or youths prized? Is there a ruling class or lineage? A merit system with tests and rankings?

A culture that avoids risk will have a lot more rules. If everyone in your culture is expected to refrain from playing music at night, or to wear protective gear during strenuous activities, they value the certainty of avoiding problems more than the freedom they’re losing. On the other hand, if your culture takes a laissez-faire attitude toward behavior and allows others to suffer for their failures, freedom is more important.

Traditional cultures value the past, and live in the moment rather than preparing for the future. Innovative cultures value change, and spend more time planning and preparing for the future than reveling in today. Does your culture tell stories about “the good old days”? Have they preserved important rituals for thousands of years? If so, they’re probably traditional. On the other hand, do they glorify scientific breakthroughs? Or do they dream of new cities on another continent, planet, or solar system? Then they’re probably innovative.

Some cultures place a high value on productivity. They start work strictly on time every morning, stop for breaks only briefly, and are expected to stay on task the entire day. Other cultures have a much looser sense of time. Everyone is expected to show up to a meeting very late, and lunch or dinner could easily be two hours long. Stopping to socialize or rest is a regular occurrence during their workday. The first culture values hard work, the second prefers to seize the day.

Your culture doesn’t have to be strictly one or the other. It could be in between, hold contradictions, or have a sharp disagreement between multiple factions.

Now that you know the basic values and priorities of your culture, it’s time to set standards for behavior. Start with the strongest and most influential of standards: taboos.

Taboos are actions that are considered indecent. Someone who openly commits a taboo isn’t just frowned upon. They might be executed, jailed, ousted from the community, or at least widely shunned. There is no taboo that is consistent across all cultures, but common ones relate to:

If you want to know whether your culture considers a behavior taboo, ask yourself if members might do it in public, surrounded by people.

Mores are guidelines for ethical behavior. Others might not be disgusted when mores are violated, but they would disapprove. There may be some overlap with taboos. If sex is taboo, having sex at different times, places, with different people, or in different ways than the culture approves of could be violating cultural mores.

Examine the priorities you choose for your culture in the last section. What are some common ways individuals might honor those values? How might they flout them? If families are important to your culture, members could be expected to financially support their family. On the other hand, gambling away family income could be considered deeply unethical.

Folkways are small conventions that dictate polite behavior. Violating a folkway will create an awkward moment or set a bad impression, but it probably won’t do permanent social harm. In your culture, a guest might be expected to bring a gift for the host, or take their shoes off at the door. People who are speaking to each other might make direct eye contact – or avoid it. Specific gestures could be polite or rude. Your culture might have ritual greetings or customary declines. Any society will have hundreds of these small conventions, used to maintain courtesy or send signals to the people around them.

When creating cultural norms, don’t be afraid to set unrealistic expectations. Sneezing around others might be taboo even though many people suffer from allergies. The way your culture works around these contradictions – such as with euphemisms, concealing garments, or retreating to privacy – will make it interesting.

A well developed culture can make the most mundane moments feel unique. The subtle details in a conversation can showcase your world while still addressing important thoughts and feelings. Just remember to design your society thoughtfully; their culture is not yours, and it’s easy to let your own customs slip in by accident.

Comments on Starting a Fictional Culture