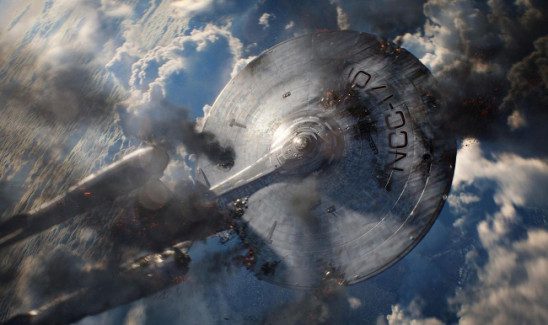 After J.J. Abrams’ 2009 reboot of the Star Trek franchise, the expectation was that we would continue to see original stories in this new, faster, and flashier take on Star Trek. Into Darkness gives audiences a taste of this, but it is wrapped in themes and dialogue that will be most appreciated by fans of Nicholas Meyer’s 1982 Star Trek II: The Wrath of Khan. While Abrams has said this is a film for “movie fans, not Trek fans,” and while it does follow a plot line that brings in new twists, many of the scenes directly to play off of the emotional strength of Into Darkness’s predecessor.

Since the movie was a remake of The Wrath of Khan for the new Star Trek continuity, there are many plot points that are predictable. However, the movie as a whole is a new story made with the Khan mythos. The world is unmistakably Star Trek, filled with aliens, starship battles, and conflicts on a grand scale. The driving concept, how Starfleet deals with the internal struggle against militarization, adds depth to what would otherwise be a straightforward action movie.  I do take some points off for the homogeneity of Starfleet command however; outside of the main cast, we see few women or non-white figures of authority, and those that are present have no lines or significant screen time.  Abrams has taken an unfortunate step backwards for Star Trek when it comes to equal representation on screen. 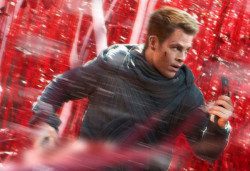 Like the 2009 reboot of Star Trek, the visuals of Into Darkness are stunning.  Lens flares are back, but it seems that JJ Abrams is a little more restrained in their use this time.  The use of color in the setting effectively sets the mood for each location. In the opening scene begins with Kirk and Bones on a pre-warp alien planet, the “otherness” of this place is immediately communicated through sprawling red forests and white as chalk aliens.  This method is used effectively throughout the movie. 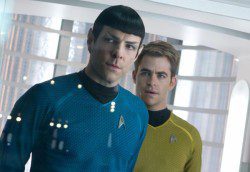 Chris Pine and Zachary Quinto have both returned with excellent performances, and while the character writing has a few issues early on, we are shown new and interesting aspects of these two key characters through the rest of the movie.  Benedict Cumberbatch also does an excellent job remaking the mythic Khan.  The original Khan was clever and knew it, and Cumberbatch’s Khan has a casual arrogance that will be familiar to those who have seen him play Sherlock Holmes.  The writing successfully highlights Khan’s brilliance as much as his physical enhancements and Cumberbatch pulls this off perfectly.

Individually, each scene of Into Darkness is aimed at a specific piece of plot advancement and complementing emotional note. This narrow focus delivers a captivating experience throughout the movie.  The dialogue is clever, the tension well managed, and the audience is led through a somewhat complex plot with little difficulty.

Through the course of Into Darkness the full arc of Khan’s original story is mirrored.  Abrams designed this film to target new audiences, but many aspects of the plot work much better if you are a familiar with the source material.

After the first face-to-face encounter between Kirk and Khan, there is the sense that they have a grudging respect for each other, and hints are given that Khan may not really be the villain.  This ambiguity mimics Khan’s original introduction in the Star Trek episode “Space Seed,” where Khan is treated as a guest before his intentions for Enterprise are made clear.  The long time Trek fan is better equipped to understand the progression of this part of the plot, because it is drawing so much from the original arc.

Towards the end, the main space battle occurs in isolation from Starfleet, despite the fact that they are orbiting Earth while this is happening.  This fact, Enterprise’s descent through the clouds, and the desperate struggle to save the ship from critical damage inflicted by Khan, are all designed to recreate the feel of The Wrath of Khan’s climax in a cloudy nebula.

The main cast of Into Darkness have some missed opportunities, but overall are enjoyable.  Kirk has some regression in the first part of the movie, when his disregard for regulations informs lets the audience the movie is going to retread some of the character development that was supposed to be resolved in the last film.  Despite this weakness in the writing of Kirk’s character, Pine’s performance continues to be strong.

The portrayal of Spock through the writing gives Quinto a much stronger starting point for his quality performance.  While this movie keeps the Wrath of Khan theme that “The needs of the many outweigh the needs of the few,” we also see Spock struggling with the emotions of his human half.  Spock’s arc gives him substantial character growth. At the beginning of Into Darkness, the audience may think Spock is devoid of emotion, but by the end, it’s clear just how much effort goes into controlling his emotions.

Like the 2009 reboot, Into Darkness does have a number of plot holes, chief among them that travel and communications happen at the speed of plot convenience. The new Enterprise can traverse to Kronos and back in a matter of minutes, which would have required a warp drive far more advanced than Starfleet has even in the original timeline. This is at least consistent between both of Abrams’ Trek films, though there has never been any explanation for why physics work differently in this timeline.

What I find less forgivable, is that Kirk is not able to contact Starfleet to report that he’s under attack by a rogue admiral.  This is happening while the Enterprise is in orbit around Earth, and their communications are working fine. Kirk can give Scotty a call at Starfleet all the way from Kronos without even having to route the call through the ship’s subspace communicator, but Enterprise can’t alert Starfleet that they’re under attack while in geosynchronous orbit above San Francisco?  That definitely seemed out of place.

Overall, Star Trek Into Darkness is a thoroughly enjoyable movie, and it accomplishes Abrams’ goal of reopening the franchise to a new audience.  However, if you are a critical viewer, I would recommend taking the time to watch Star Trek II: The Wrath of Khan first.  The focus on a new audience leave Trek fans with a few things to nitpick, but overall your viewing experience will be enhanced by understanding the source material.