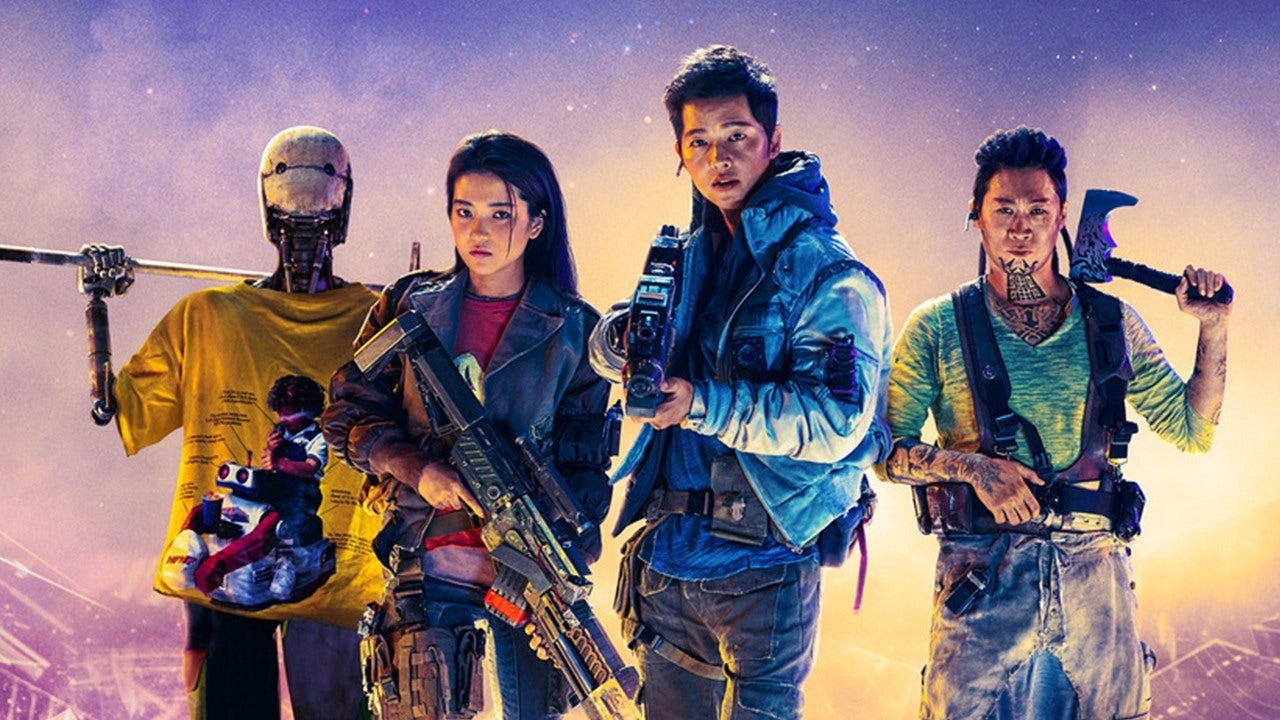 Space Sweepers, the new Korean blockbuster on Netflix, is not a flawless movie. Some portions are incredibly confusing, plot twists come out of nowhere, its pace becomes exhausting, and jarring tone changes make important events feel contrived. But along with a strong set of heroes and beautiful special effects, it’s been getting buzz for an unusual reason: its message. And that buzz is entirely justified.

As things stand in the industry, most storytellers – even big names – are pretty bad at messaging. Whether it’s because they’re afraid to be bold or they aren’t willing to make important changes, too many storytellers try to say something by changing the curtains rather than remodeling the house. Among these lackluster efforts, Space Sweepers stands out.

This is especially worth celebrating because Space Sweepers is not a movie that claims to be deep. It’s a pulpy scifi action flick intended for good old escapism. In making such relevant commentary, Space Sweepers defies the many literary academics who think meaning is mutually exclusive with imaginative entertainment.

Let’s look at how it does that.

Spoiler Notice: While Space Sweeper’s plot is described in vague terms, I mention several events and reveals from the second half of the movie.

It Depicts Its Subject in Detail

Space Sweepers is about classism. That may seem unremarkable because so many stories use poverty to garner sympathy for their heroes. While it’s true that a story with a poor protagonist is affirming the value of people living in poverty, using poverty to make your hero an underdog is a far cry from sending an insightful message about poverty. When a storyteller depicts something they are passionate about, they flesh it out with numerous realistic details. Instead of just giving the audience a vague picture of the subject matter, the storyteller educates them.

The beginning of Space Sweepers is devoted to showing how the heroes are trapped in poverty despite hard work, skill, and personal perseverance. They make their living salvaging space debris floating around Earth. To get started, they had to go into debt to buy a ship they could use to get salvage. Then, all the salvage they get is sold to one giant corporation with immense bargaining power. Using that power, the corporation piles on fees until the heroes’ profit evaporates. As a result, they’re only sinking further into debt. This is a great analogy for real-world situations such as the plight of American chicken farmers.

Space Sweepers also isn’t afraid to point a finger at those responsible for classism: the wealthy. Without that, any message about oppression won’t make an impact. Like the heroes, the big bad of Space Sweepers has a clear real-world basis. Named James Sullivan, this white Mars-terraforming CEO is so obviously based on Jeff Bezos and Elon Musk that I’m just calling him Elon Bezos for the rest of this article.

This detail and realism sets Space Sweepers apart from other popular stories about classism, such as Red Rising or The Hunger Games. While a story doesn’t have to closely mirror contemporary issues to have strong messaging, doing so ensures the audience knows exactly who the movie stands with and who it stands against. This helps prevent the message from being appropriated by another ideology or watered down into a feel-good tale that only encourages complacency.

The Message Is Built Into the Plot

In April of 2018, Jeff Bezos said this in an interview with Business Insider:

The only way that I can see to deploy this much financial resource is by converting my Amazon winnings into space travel. That is basically it.

About a month after stating this, Amazon fought tooth and nail to keep the city of Seattle from imposing a small business tax to address a homelessness crisis that Amazon itself had contributed to.

Both Jeff Bezos and Elon Musk claim that their space investments will save humanity. Elon Musk thinks we need a colony on Mars so we don’t have all our human eggs in one basket. Jeff Bezos says harvesting resources from space will save Earth’s environment, all while his employees have been protesting that his company isn’t environmentally friendly.

Space Sweepers makes a strong statement about this hypocrisy by turning it into the story’s plot. In the movie, Earth is so choked with pollutants that it’s barely inhabitable. Meanwhile, Elon Bezos is terraforming Mars to create an exclusive utopia he controls. When a reporter asks him why he’s investing in Mars rather than Earth, he refers to some clearly PR-motivated charities his company funds. However, as the movie continues, viewers learn that he wants everyone to give up on Earth so they’ll embrace his Mars colony.

The heroes become involved in this situation after they salvage important technology that can save Earth. At first, they try to sell it for money so they can beat the rigged game they’re playing. But after Elon Bezos tries to destroy them and the technology, the heroes realize they have to fight for something greater. They end up allying with an activist group that wants to save Earth.

Whereas Earth is presented as a lost cause in the movie’s opening, the heroes soon realize this is corporate propaganda. It’s impossible for the corporation to have the resources to terraform Mars but not to improve a planet that’s far more habitable. This is a common rebuttal to Elon Musk’s “eggs in one basket” argument.

Most important causes shouldn’t be viewed in isolation. Many reforms can only succeed with the cooperation of a diverse group of people with different needs. Similarly, commentary on oppression must acknowledge that different groups of people experience oppression in different ways.

While it’s always possible for a story to have more perspectives, Space Sweepers is definitely above the curve in including intersecting issues.

Space Sweepers doesn’t just have commentary on classism at its center; it also heavily features themes of environmental justice. While Earth is covered in smog, the wealthy have fled to space colonies with clean air and blue skies. The movie features a terrorist group called Black Fox that is later revealed to be not a terrorist group at all, but an environmental advocacy group. These environmental justice themes are critical because corporations typically fight environmental regulation by claiming lower-income people will lose their jobs. Often, this is outright false, but regardless, environmental devastation hurts those lower-income workers more than it hurts the wealthy.

While it doesn’t feature as heavily in the plot, the classism depicted in Space Sweepers clearly has elements of racism as well. While the main cast is Korean and side characters come in a diverse array of races and languages, Elon Bezos and the people shown in his Mars utopia are largely white. Viewers learn that the Mars colony is basically a big eugenics experiment. Elon Bezos thinks that a person’s moral integrity can be measured via their DNA, and he only wants to allow “worthy” people in.

While Space Sweepers would have benefited from greater gender diversity, it still compares favorably to most other movies. The captain of the salvage crew is a woman, and she is a clever and competent leader. The engineer is a burly man who quickly bonds with a child they pick up along the way. Most of all, the crew includes a robot who is also a trans woman. Don’t get me wrong: she would provide better representation as a human. Nonetheless, trans characters are still rare in big-budget works, and she is depicted in a positive light. She has a distinct and well-rounded personality, and her desire to change her presentation to reflect her gender is never mocked or stigmatized. Since a large price tag is attached to changing her appearance, Space Sweepers also shows the disproportionate impact that poverty can have on trans people.

The Movie Still Has Room for Improvement

While the messaging of Space Sweepers is excellent, it could have been strengthened in a few areas.

The filmmakers clearly had some trouble incorporating a wealthy billionaire into their pulp action movie. Real billionaires naturally make others do their dirty work for them; they never personally head into danger. Yet toward the climax of the movie, Elon Bezos not only leaves his sanctuary to mock the heroes in person, but also spontaneously becomes a fighter pilot so he can enact his evil plan himself.

While I sympathize with the difficulty of getting the heroes within punching range of a billionaire villain, this contrivance is disappointing. Since Space Sweepers opens with a problem that’s clearly based on the real world, the question becomes how that problem could be solved in the real world. And in the real world, billionaires aren’t just going to put themselves on the chopping block.

Because their greater number is the only advantage that poor people have over the rich, any realistic solution to class issues would involve collective action. While the movie does include lower-income people coming together to prevent catastrophe, it’s too last minute and tacked on to be meaningful. There’s one heroic speech, and then suddenly a large force arrives.

Compared to the detailed descriptions of how the heroes are trapped in poverty, this is lackluster. The movie doesn’t educate its audience on why collective action is important or how to create and support it. Considering how exhausting the nonstop action is toward the end of the film, I think more of that time should have been invested in making group efforts a bigger part of the solution.

The Heroes Throw Money in the Trash

The rich often sell the poor on classist systems by telling them that they too could be rich someday, and Space Sweepers does a great job of depicting this. The heroes start their involvement in the plot by trying to get lots of money through unethical means. Their arc, and the arc of the main character in particular, is to let that go. However, once the characters have some blood money* on their hands, the movie depicts throwing it in the trash as noble.

Because the rich do unethical things to hoard money, it’s tempting to embrace the notion that money is inherently tainted. But this is an incredibly classist idea. Only people who are financially secure have the privilege of turning down money that could buy food, shelter, and medical care. Only the relatively well-off have lots of time to engage in unpaid labor. The idea that receiving money taints a person’s work is used to convince lower- and middle-class people that they shouldn’t receive fair compensation.

This isn’t to say that heroes should never refuse money gained unethically. But that money should always be given to those who need it, never trashed.

If sending a message is important to you, think about your message when ideas for your story are still forming. You don’t have to give up entertainment, escapism, and wish-fulfillment to have a strong message, but it can’t be treated as an afterthought.

Truthfully, the blood money they get isn’t even blood money. But Space Sweepers wants viewers to think it is, and for the sake of argument I’m going with that.

Comments on Space Sweepers Shows Us What Excellent Messaging Is