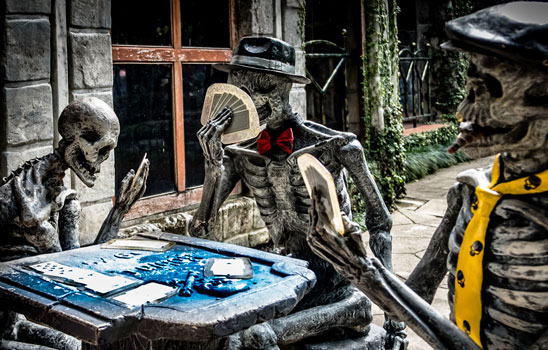 Many stories use the possibility that the hero will die to keep the story tense. But since heroes live through most life-threatening situations, it’s difficult to convince savvy audience members that your hero could meet their end. To get the drop on your audience, you’ll have to mimic the type of story where the hero actually dies. I’ll show you ways to do that.

Before we get started, however, make sure this is something you want for your story. Most tales do fine with “Oh no! The protagonist is in danger – wink wink.” Knowing the protagonist won’t die gives the audience a little security blanket. This prevents the tension from becoming too stressful for many audience members, and it assures everyone that they’ll walk away feeling good. If you take the security blanket away, you’re crafting a high-threat story for a dark-loving audience. This is true even if you give them a happy ending after all.

Spoiler Notice: Minor spoilers for Game of Thrones and the movie Serenity.

Expectations for your story start with the genre, setting, and atmosphere. Combined, I call these things the story’s worldview. If your story opens with a couple of rabbits chatting over tea, your audience probably won’t expect anyone to die, much less the main character. But if your worldview is grim as hell, that makes death feel more likely.

You want something that feels both brutal and unfair, the type of place where hopes and ideals go to die. For example, maybe every human in your world dies before the age of 25 because they are eaten by giants. These giants keep everyone who’s alive together in a pen to breed and therefore produce more food. The giants like their meat young and tender, so when they are celebrating, they’ll take kids as a treat.

No, your setting doesn’t have to be that brutal. But the darker it is, the more likely it will feel that a character as important as your hero could die.

These types of deaths will do you no good:

Instead, you might consider depicting what looks like multiple main characters and then killing off some of them. And if their deaths are sudden and senseless, that will make the deaths more effective at raising tension for other characters. If you depict a noble sacrifice for the greater good, you are still signaling that your story follows karmic rules. If the death is unfair, you are emphasizing that the goodness of the heroes won’t protect them from their fate.

Even if you kill protagonists, a character who’s clearly special and of central importance to the story will appear to have plot armor. For instance, in the show Attack on Titan, many of the named characters are brutally killed. However, the main character Eren has a unique special power that makes him both humanity’s last hope and a potential threat. With this setup, it’s incredibly unlikely he’ll be killed off. The story would lose not only its most sympathetic character but also one of its best sources of conflict.

Some plot armor is okay if you want your audience to think your hero will die at the end. However, it will lower tension during mid-story struggles. If you want the audience to worry that your central hero could die at any moment, there must be a way for the story to continue without them. If you have more than one main character and the audience doesn’t know which one is most central, then any of them could be killed at any time.

Just as you want to avoid plot signals that tell your audience your hero will stick around, you can also insert plot reasons for them to die. Even if audience members aren’t consciously aware of it, they will generally notice this, and it will change their perception of whether your character could die.

First, you can hint at a heroic death in the works by giving your character something to die for. Perhaps they are a parent who will do anything to save their child. Introduce a situation at the climax where it looks like the parent can only save the child by dying, and a noble sacrifice will feel plausible.

You can also make it look like your character’s death will solve your story’s main conflict. Perhaps a great city needs a mythical magic stone to protect itself, and you’ve hinted that this stone was forged into the heart of your golem main character. Audience members who notice these hints may expect the main character to sacrifice themself at the end by giving up their own heart. Note that if you openly declare this, it will increase conflict and tension in your plot, but it probably won’t convince your audience that your main character will die. You want it to look like you’re foreshadowing for a reveal.

If the story has reached the climax and it looks like there’s simply no way to turn things around, the odds of important characters dying become much more likely. Hordes of enemies can do the trick, but the most effective thing is making your hero’s health look like it’s gone past the point of no return. If they have contracted the plague, been stabbed in the stomach, and had a leg eaten off, your audience will probably expect them to throw away their life for the cause.

However, this is a balancing act. You don’t want to convince your audience that your main character will die only to deliver an unconvincing victory. A happy ending that feels cheap is unsatisfying. So to pull this off, you’ll need to foreshadow the solution to these problems carefully and have a plausible reason for how things got so bleak despite that solution.

This balancing act will be easier if you don’t restore everything to the way it was. For example, the cities should have to rebuild and your protagonist should need to recover. In particular, if your protagonist loses a limb or otherwise gains what looks like a permanent disability, I strongly recommend against magically healing it. Not only could this feel cheap, but it could also make people with disabilities feel cheated of representation.

6. Use a Karmic Reversal

This tactic is difficult to pull off with a main character. Only use it if you’re ready to revise your story several times after hearing from your beta readers.

I’ve previously discussed character karma – the sense in a story that some characters deserve a good or bad fate because of their deeds or misdeeds. Rewarding or punishing characters to balance karma creates outcomes that feel satisfying to audiences. But that’s not all it does. Because following karma is a strong convention, audiences know that a character with bad karma is more likely to get the axe. Many traditional story forms like Greek tragedies are based around the idea that the main character has a fatal flaw, and that flaw is responsible for their downfall at the end. That’s how you kill a main character in a satisfying way.

But in this case, the goal is to make it look like the main character will die – but let them live. You can give your main character bad karma so it looks like they’ll die, but your ending still needs to feel satisfying. So at the climax, you’ll have to flip their karma from bad to good. You’ll either need to redeem your character really quickly or reveal that what looked like flaw all along was really a strength. Maybe their willingness to sacrifice the few for the many was actually what the world needed.

If you use the latter option, don’t try to justify their actions using random chance. If they are in the habit of killing any aliens they encounter without knowing anything about those aliens, and the aliens they meet in the book just happen to be evil, that won’t make them look great. Instead, you’ll need to reveal that they made the right choices considering what they knew at the time. Consider pairing your reveal with the prior achievement turning point for a powerful ending.

If you’re committed to bluffing your hero’s death, I recommend using at least three of these tactics. There’s no magic bullet for this; it’s an arms race with the audience that only escalates as time goes on.

Comments on Six Ways to Bluff That Your Hero Will Die