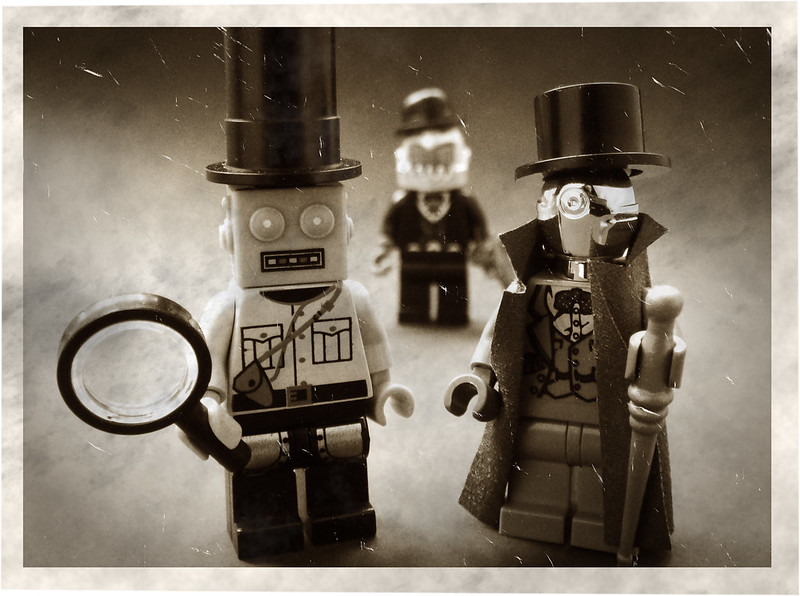 Victorian Robo Detective and Dr WATTson by Guy H used under CC BY 2.0

Mysteries are great fun, but even a murder case doesn’t create much tension by default. If someone’s dead, the worst has already happened to them, and getting justice isn’t typically urgent. Plus, whatever the villain wants to accomplish by the murder is usually unknown in the beginning. That’s why it’s easy for a whodunit arc to become a leisurely intellectual puzzle that the protagonist works on in their spare time. To change that, here’s six ways to give your mystery more urgent and compelling stakes.

1. The Killer Is Striking Close to Home

The most obvious way is to have the villain keep hurting people until they are caught. However, there’s a big difference between nameless people being killed and a likable character being killed. If you give the villain a target the protagonist knows, the case will be more personal and the stakes more compelling – particularly if the target is the protagonist themself.

In some stories, you may want to keep the next target mysterious so it’s not clear what the villain’s plan is. However, you have a couple of options for making them known while keeping the killer’s motives pretty mysterious.

If it’s hard to make the target an important character to start, another option is to have the protagonist and audience get to know them while they are being protected from the villain.

2. Someone Important Is Missing

Letting the villain capture someone adds lots of urgency to the case. If the kidnapper isn’t caught soon, their victim could be dead. That’s particularly compelling if the missing person is a loved one. However, there are many other ways to add stakes to this scenario. The missing person might be essential to another effort or cause. Maybe they’re a key witness in a trial or a political figure advocating for important reforms.

This also works for villains who steal important items rather than people. Maybe a magic jewel they stole is the only way to cure a serious disease, or the cutting-edge weapon they took could be used any day. However, if an item is missing, make sure you have a reason why the protagonist must get it back soon. Unlike a person who might be killed, stolen items don’t have built-in urgency.

3. A Loved One Has Been Blamed

Instead of needing to save future victims, the protagonist might need to prove someone didn’t do it. That person might have been set up by the real criminal, or maybe they were just in the wrong place at the wrong time. Regardless, if they aren’t already an important character, the audience will need to get to know them and develop sympathy for them. If they were already powerless and living a hard life, that would make them an easy target for authorities.

In most stories, a quick execution isn’t a possibility, so you’ll also need a source of urgency. If someone is being held in jail, that can sabotage their life in a variety of ways. They could lose their career because they can’t show up to work, or they could leave their family without support or protection. Depending on your setting or the capabilities of your villain, jail could also be a dangerous place. Maybe they’re a sitting duck for an assassin, or the police are inclined to let a dangerous mob through the doors.

Of course, your protagonist could always be the one who’s blamed. That creates both compelling stakes and an easy source of urgency. As the protagonist tries to solve the case, the authorities will close in. Once the protagonist is caught, they won’t be able to do anything.

4. Inheritance Hinges on What Happened

In many jurisdictions, including the US and the UK, a murderer cannot inherit property from their victim. That means if a character is convicted of murder, it could change who gets important property. In addition, the deceased’s will could apply rules to inheritance, or if there’s a legal dispute over the will, unethical behavior by possible heirs could factor in. All of this means inheritance can be used as stakes in a murder mystery.

However, it takes a little effort to make inheritance compelling. Audiences are drawn in by negative outcomes, not rewards, so giving someone a windfall isn’t enough. To fix that, you’ll need to demonstrate why the person who should inherit the money desperately needs it. Maybe they’ll die unless they get the money for an expensive medical procedure. Alternatively, you could show that if the other party gets the inheritance, they’ll do terrible things with it. Perhaps they want to invest in expanding an unethical business. Or better yet, you can show both why the true heir needs it and how the inheritance could be used unethically if it falls in the wrong hands.

Inheritance also doesn’t need to be money. It could include valuable land, an ancient family estate with hidden secrets, ownership of a business, intellectual property such as patents, or some magic items. All of these could be used by a protagonist or abused by a villain.

5. The Crime Has Sparked a Greater Conflict

When a leader or another important person dies, people may assume their enemies did it. Perhaps a nation uses their murdered general as an excuse to go to war, or an old family feud restarts when a cousin winds up dead. Pretty soon, more lives are on the line.

However, it takes some setup to make this believable. First, the groups in question need a history of enmity, or they’ll wait before acting on any assumptions. A good formula is to give them a conflict over resources and then add in grudges or prejudice. Maybe they’re business competitors, they’re fighting over some valuable land, or there was an inheritance dispute. When they fought over this previously, people got hurt, and they blamed each other. Then, they came up with propaganda or negative stereotypes about the other side. This will make it harder for them to resolve their problems peacefully.

Once you have a strong reason they dislike each other, then you need a believable reason one side would blame the other for the murder. The deceased might have been involved in some effort that would give one side a disadvantage. Alternatively, they could have done something previously to anger the other faction.

If powerful people already have a self-serving reason to start a new conflict, then it becomes especially believable. All they will need is an excuse they can use to sell that conflict to others.

6. An Angry Ghost Is Out for Blood

Who doesn’t like angry ghosts? They may not fit every setting, but when they do, they can transform a leisurely puzzle into a life-or-death scenario. They’re also incredibly flexible. Audiences don’t expect ghosts to act logically, and their death could have happened anywhere from yesterday to thousands of years ago.

To create stakes, the ghost is usually hurting people out of anger, confusion, or grief. If people will die soon and there isn’t any way to overpower the ghost, solving the mystery of the ghost’s death will be the next best thing. Ghosts can also have magic they use to trap the protagonists in a haunted house or another location, forcing them to figure out the mystery. For urgency in that scenario, either show the trap is getting more and more deadly, or impose a specific deadline, such as midnight or sunrise. No one who’s trapped has ever lived past that point.

Many storytellers like to reveal that the scary ghost never meant harm; it was just trying to warn the protagonist about the real danger, such as a living murderer or another ghost. This can work, but the ghost’s behavior must be carefully balanced. While ghosts may be irrational, throwing knives or writing “die” in blood is not a friendly warning even by the most generous interpretations.

For a lighter story, the ghost can feel threatening but never hurt anyone. The mystery may reveal that the ghost died by an accident instead of murder, and something from the ghost’s life can give them closure. Maybe they need to learn that a loved one didn’t abandon them after all, but was prevented from returning.

Mystery arcs give protagonists a great reason to talk to side characters and investigate the deep backstory of a person or location. They don’t have to be action-packed, leaving lots of space for character growth and relationship arcs. As long as you add some tension, let your protagonist earn their clues, and keep the outcome surprising, a mystery plot is a wonderful addition to many stories.

Comments on Six Ways to Add Stakes to a Mystery