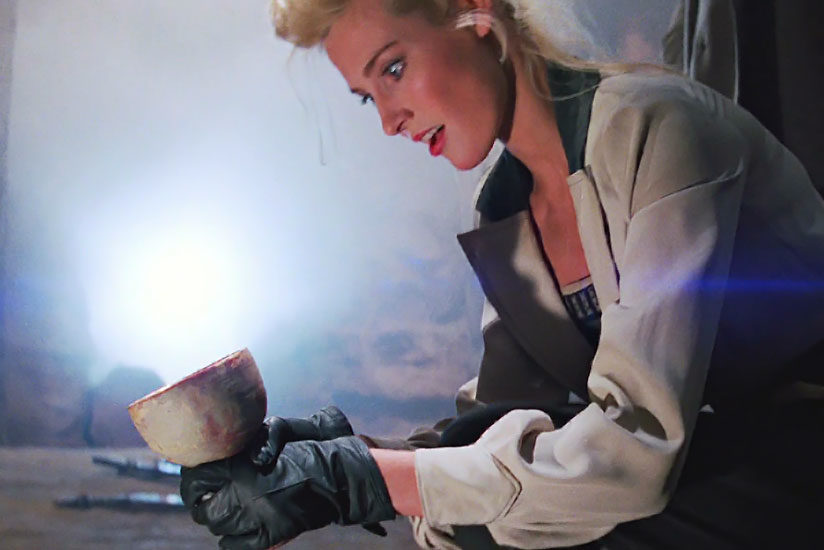 The two requirements of downward turning points are:

Instead of making a sacrifice, the character won’t let go of their personal desires when they need to. Their desperation to hold on to what they have in the face of a greater threat makes them reckless. Perhaps a zombie horde is on its way, but the character keeps gathering all of their possessions when they should be running to safety. Or the character might unleash an evil spirit in their effort to revive a dead loved one. Whatever it is, the character should have plenty of warning that their choice could lead to ruin.

In the 2021 Shang-Chi and the Legend of the Ten Rings, the great warrior Xu Wenwu puts aside his powerful rings and stops running his criminal organization after he meets his wife, Ying Li. However, after Li is killed by Wenwu’s enemies, Wenwu takes up the rings again and uses them to get revenge. Years later, a demonic creature known as the Dweller-in-Darkness calls to Wenwu by imitating Li’s voice. It tells Wenwu that she is locked behind a magical gate and needs him to free her. Ignoring the warnings of his children, Wenwu attacks the magical gate, unleashing the Dweller-in-Darkness. Before the creature kills him, Wenwu gifts the rings to his son.

It’s easy to make this one sympathetic, so it’s a great choice for a failure by a protagonist or a tragic villain. How much bad karma a character gains from a refusal to let go depends on how their choice affects others:

The character goes behind the backs of their fellows and strikes a deal with the enemy. Then this collaborator fulfills their end of the deal by sabotaging the people who trust them. But naturally, the enemy has no intention of fulfilling their promises; they might even kill the collaborator instead. Alternately, the reverse could happen – the collaborator might screw over their friends and then screw over the enemy.

Indiana learns of their treachery, but they hold his father hostage to force him to lead them through the traps protecting the Holy Grail. However, what they find past the traps is not one grail, but a whole collection. Since Elsa’s an expert, Donovan trusts her to choose the right grail for him. Instead, she gives him the wrong one. After he drinks from it, he dies.

The betrayed betrayer is easy to use because it needs little justification. Traitors are inherently untrustworthy, and someone who strikes a deal with one is unlikely to be much better. Without a genuine bond of loyalty between the characters, they may each feel they need to attack before the other person does. When the deal goes wrong, it often means one of the characters is being punished both for harming others and for making an unwise choice of allies.

The downside of this turning point is that it can feel cliché and encourage mustache-twirling villains. If Team Evil does nothing but constantly stab each other in the back, they will feel more laughable than intimidating. So if you’ll be using this one, focus on giving your characters positive traits and even building sympathy. Maybe the enemy has tricked the collaborator into thinking that what they’re doing is the right thing, even though they should know better.

The character suffers a devastating loss, whether that’s their loved ones, their home, or their dreams for the future. As they are reeling from that loss, they can’t bring themself to care about anything else that could be at risk. Instead of responding to threats, they do nothing and let events unfold.

In the Deep Space Nine episode The Die Is Cast, the Cardassian Garak joins his old mentor, Tain, for a surprise attack on the enemy. Tain is a secret operative that thinks nostalgically back on his glory days and is eager to get back in the game. But as it turns out, one of the men he is collaborating with is a spy, turning their surprise attack into a trap. As his ship takes damage and the enemy closes in, Tain regretfully comments that he’s grown too prideful, and he wouldn’t have trusted the spy in his early days. Garak is unable to convince Tain to evacuate the ship and has to leave him to be captured or killed.

Justifying why a character does nothing in the face of a life-or-death situation takes exceptional circumstances, but stories often provide them. If a character is holding a dead loved one in their arms, it’s understandable that they may not care that the village is burning around them. If you use a smaller loss and lower stakes, your character might come off as petty, but in some cases that might be what you want. Maybe your character learns they were passed over for a promotion, and then in their sullen disillusionment, they ignore signs of trouble at their workplace.

Generally, this turning point is used for side characters, though it can also create a little sympathy for the villain after they lose to the hero. Because main characters need agency, this doesn’t fit them as well. However, a lower-stakes version might work for an early failure, especially if it causes problems they have to clean up.

The character eagerly pursues something that isn’t good for them to the point that it leads to their destruction. They might be headed into an ancient crypt to steal cursed treasure, or they might chase after their white whale until their life is in ruins. In many stories, the only thing more harmful than their pursuit of temptation is actually getting what they want.

In Indiana Jones and the Raiders of the Lost Ark, the Nazis set out to find the legendary Ark of the Covenant under the belief that they can use it to make their army invincible. Indiana Jones manages to find it before they do, but they discover his location and take it from him. To test the ark’s power, the Nazis decide to open it and look inside. However, Indiana knows the power of the ark is forbidden; he closes his eyes so he won’t see. Once the ark is open, spirits emerge and kill everyone who looked within.

If you have a character pursuing temptation throughout your story, scale up for the climax by presenting more dangerous obstacles. Perhaps your villain hurts others to reach the object of their temptation, and then navigates lethal traps as they get closer. Only at the end does it become apparent that this temptation could destroy them if they take it, and they take it anyway.

5. Victim of Their Victim

The character is selfish enough to cause needless harm to other people or creatures. Since they’re more powerful than their victims, they assume they won’t face consequences for their actions. But later, often with the help of Team Good, one or more of their victims manages to turn the tables on them, and those victims are vengeful.

In Game of Thrones, Ramsay Bolton is a villain who takes pleasure in hurting and controlling others. One of the tools he uses is his hunting dogs. To make them as vicious as possible, he’ll deprive them of food for prolonged periods before unleashing them on his victims. After Ramsay is captured in a battle, the former wife he assaulted, Sansa, decides to kill him simply by putting him in a pen with his hungry dogs.

This turning point usually involves a character who does intentional harm, so it’s much better suited to a villain than a hero. It’s often used for killing villains when the hero doesn’t want to dirty their hands. Just show some animals the villain was mean to, and then let those animals out of their cages.

However, it’s still possible to scale the bad karma down. Perhaps your protagonist is thoughtless, and that thoughtlessness leads to another person losing something they care about. For instance, your hero might wreck a building that someone needed for their livelihood. That someone might be in the position to cause trouble for the character later.

Regardless of how severe the harm is, this turning point usually relies on existing bad karma from a prior misdeed that’s gone unpunished.

Everyone is terrified of an incoming threat. That is, everyone except your arrogant character. Whether it’s because they have the most expensive tech in existence, they’re known as the greatest warrior in the land, or they believe they can outwit everyone and everything, they’re sure that the threat couldn’t possibly get the better of them. Naturally, the arrogant character isn’t afraid to boast about this. But when the threat arrives, they quickly discover just how wrong they were.

In Don’t Look Up, the president and her CEO backer and adviser, Peter Isherwell, abort a mission to destroy a comet that’s headed toward Earth. Instead, they come up with an elaborate plan to split the comet into chunks so that minerals worth trillions of dollars can be extracted. Assuming that their new technology will work on the first try, they ignore warnings from scientists that their plan is unlikely to succeed. When Earth is destroyed as a result, they use their power and wealth to escape to another planet. Then they’re eaten by the local wildlife.

On its own, arrogance usually attracts audience antipathy and builds bad karma. While that makes it a bad fit for a main character, you can use it to take a lesser antagonist on Team Good down a notch. Once they receive their karmic punishment, they can lose that arrogance and you might even build some sympathy for them. Antipathy for the character also means audiences often enjoy these turning points.

If you’ve already planned to kill off a side character or just let them fail, consider including a downward turning point. That way, your audience will get the added satisfaction of bad karma coming to fruition.