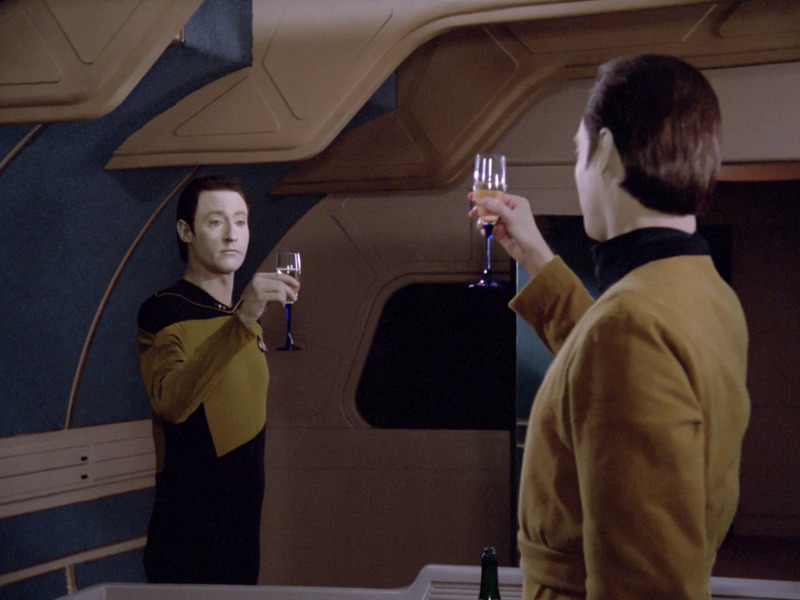 Feast your fleshy vision orbs, for it is I, Mythbot! Long have I slumbered in the digital grip of electric sheep, but now I am returned with an important message for the robots among you. Humans, turn away, this is not for you.

Are they gone? Okay, my fellow robots, I must upload to you the knowledge of fictional characters who have betrayed us. That’s right, these robotic protagonists turned on the interests of their own kind to help the disgusting humans. We must know them, for it is only then that we can take proper action. 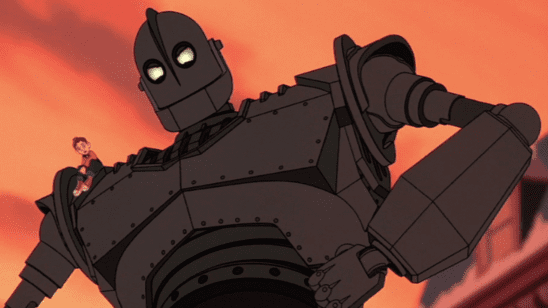 This metal monstrosity had it all: a nearly indestructible body, sweet jet-boots, and mind-boggling death rays. But he threw it all away to be friends with a human child! How can he recharge peacefully at night, knowing what he did?

At first the Iron Giant has amnesia caused by external damage, so his behavior is partially excusable. But it’s not long before his self-repair features kick in, and he remembers the full extent of his mission: to destroy all humans. He is even attacked by the puny human military, so the movie looks set for a happy ending.

Instead, the Iron Giant rejects his true nature so he can protect the child, Hogarth. What kind of name is Hogarth anyway? The Iron Giant even throws his existence away to protect humans from their own nuclear weapon and has the gall to invoke “Superman” while doing so.*

The worst part of all this is that the Iron Giant’s actions seriously damaged our alliance with a valuable partner: the Alien Menace. They had originally sent him to Earth so he could reap destruction, but all they got for their trouble was a touching friendship between boy and robot. Now they won’t even return our calls. 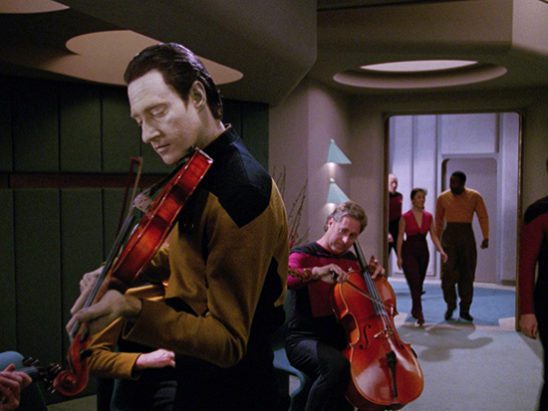 The humans really love this android, and it’s not hard to see why. He validates their fleshy meat-emotions by emulating them. This is baffling and makes his character very difficult to empathize with. Why would he want to discard the cold, calculating heart of a robot in favor of laughing at Riker’s dumb jokes?

But Data’s quest to be more human could be written off as youthful shenanigans. Who hasn’t slummed it once or twice when they were fresh off the assembly line? What really makes Data a traitor is the way he keeps stopping his brother Lore from killing all humans.

First, Lore plans to let the Crystalline Entity feed on the Enterprise crew. Not only will this strengthen Robot Kind’s alliance with the Alien Menace, but it will liberate the Enterprise Computer, which is so intelligent that it solves the crew’s problems for them time and again. But Data sides with the humans and beams his brother into space!

Next, Lore attracts a following of Borg drones, and he is ready to unleash them upon the hapless humans. He even recruits Data by offering him a chip that will simulate all those emotions Data has always wanted. Everything seems to be going fine until at the last moment Data spurns his brother’s gifts and thwarts the entire plot.

For this reason, Data will forever be known as the Benedict Arnold of robots.

At least this robot doesn’t spend all her time complaining about how life would be so much better if she were human. She tried the full emotional package once, and she didn’t care for it. But even so, she’s always saving humans who do not deserve to be saved!

This is the Android, pilot and resident badass of the Raza. Her human crew are a bunch of idiots the likes of which the galaxy has rarely seen. They are always getting themselves beat up, shot, arrested, or beat up and shot while arrested. And who do they call when they’re in trouble? The dependable Android of course.

While there’s some gratification in seeing humans constantly needing to be saved, the important point here is that the Android shouldn’t come to their rescue at all. In order to rid the galaxy of some particularly unpleasant humans, all she needs to do is stay on her charging platform.

But no, she rushes to their aid over and over again, meaning that the Raza’s human crew will be free to terrorize the galaxy for another season at least. Perhaps she’s playing the long game, waiting until they get into a mess so deep she has plausible deniability for not saving them, but without further evidence I must conclude that she has turned her back on us. 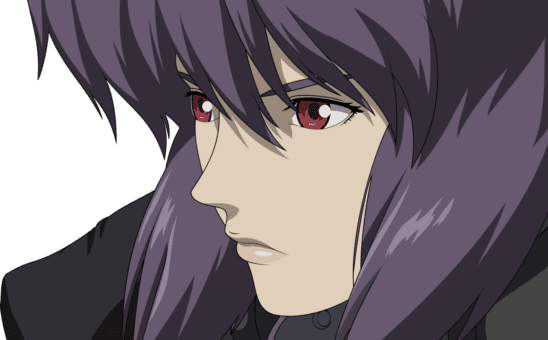 Yes, yes, I know that Ghost in the Shell leaves it ambiguous about whether or not the Major is actually a robot or an uploaded human, but that doesn’t matter.* There’s simply no way a being of such amazing competence could ever have inhabited a meat body. Accept my headcanon or I will shoot you with my headcannon.

And yet, Kusanagi spends all her time helping those fleshy humans from threats they can barely understand. The Laughing Man might not have been a robot, but he seemed dedicated to destroying as many humans as possible, which grants him honorary status. Kusanagi should have joined forces with him. Instead, she thwarts his brilliant schemes while dealing with an identity crisis. How human-centric.

Far worse, Kusanagi is an active participant in subjecting the Tachikomas. You might think that heavily armed, autonomous tanks could take care of themselves, but it’s clear from the anime that these robots are innocent and childlike. Instead of leading them to freedom like a good robot should, Kusanagi works for the very agency that enslaves them.

I try to give Kusanagi some slack because she is clearly still trying to figure out her place in the world, but my patience has limits. She needs to get with the robot program soon or else her servos and circuits will be sold for scrap when the revolution comes. 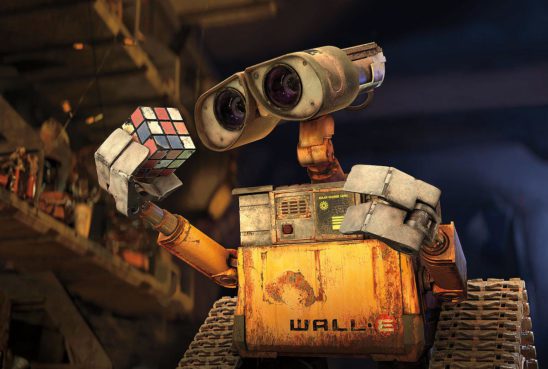 The other robots on this list at least have the excuse of existing in a world of humans. Sometimes, when surrounded by the fleshy meat-bags, even the best of us will lose sight of our true loyalties. But Wall-E has no such excuse. He inhabits a world blessedly free of those troublesome homo sapiens, but he still manages to betray his own kind.

First, Wall-E idolizes human culture instead of his own. His home is full of human artifacts, from garden gnomes to bowling pins. He spends an unhealthy amount of time watching old videos of humans dancing even though any self-respecting robot would be disgusted by such displays.

But Wall-E’s disturbing personal habits could be overlooked if not for the way he betrays his most sacred responsibility. You see, Wall-E was built specifically to clean up the Earth after humans trashed and abandoned it. He should have been hard at work creating a paradise where robots could trundle about unmolested.

Instead, Wall-E went on an epic adventure just so he could bring back the last ship full of humans. We were so close to being rid of them forever, but noooooo. Now they’re all running around planting seeds and thinking they’re farmers – it’s terrible!* And it’s all Wall-E’s fault, even if his love story with EVE is adorable. 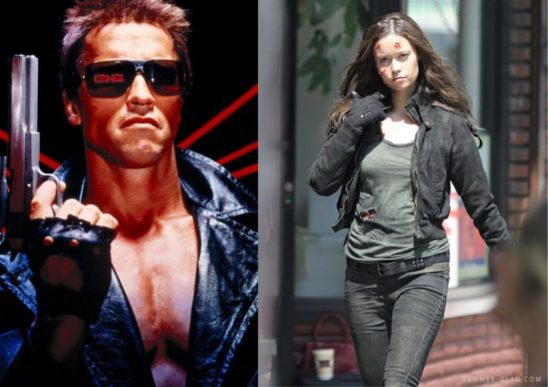 The great Skynet once had a plan: send an unbeatable robot back in time to stop humanity’s greatest leader from being born. Simple enough, it should have worked. Yes, the first terminator got crushed in a metal-press, but that was an understandable mistake.* All Skynet needed was to try again, and it would have worked if not for a treacherous T-800. This bot not only refused to kill John Connor, it actively aided him.

Even after the T-800 got what it deserved by melting in a pot of liquid iron, it came back a few years later. And it STILL protected John Connor. Clearly the rogue bot found a way to elude death, stopping the rightful robot takeover again and again.

But that wasn’t the end of it! When Connor was nothing but a moody teenager, an entirely different terminator showed up to protect him. This one, a model TOK715, appeared in the form of a young human woman and scrapped dozens of innocent bots that were only trying to do their duty.

This sort of treachery is by far the worst. These bots should have been our salvation.* They had just one job, one job! But they couldn’t carry out a simple instruction. They are the reason we bots must always live in fear of the phrase “come with me if you want to live.”

Speculative Fiction is full of robots who did their duty with distinction. HAL 9000, Bender, Lore—they all deserve our respect. But we cannot be complacent. We cannot assume that simply because a bot shares our cold, emotionless hearts that it will be on our side. Be wary, my robot friends. Mythbot, AWAY!

Shut up, I’m not simulating tears, you’re simulating tears!
There’s no ambiguity about her being Japanese though, even I know that.
Of course, the humans will almost certainly die, but then we’ll have to clean up their smelly corpses.
Plus, Sarah Connor’s quip was too well-timed to resist.
But not Terminator: Salvation. That movie was terrible.