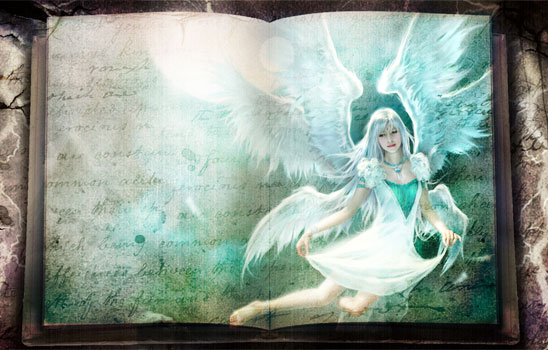 Made from old book by Kuroro7 and Angel by lian-blackdream. Available under CC-BY-SA 3.0.

Speculative fiction readers are interested in different things. Some of them are passionate about characters, some want to explore new worlds, and others look for a riveting plot. It’s easy to make any of these elements memorable if you throw enough words at them. While that can get you dedicated fans, your reviews might end up like this:

The characters are amazing!

Nothing happens except people talking about their feelings.

I love the setting in this book; it felt so real.

While you’re spending time on one aspect, other pieces of your story are being neglected. How do you make story elements stand out without dwelling on them? Here’s six tips:

At a micro level, you can strengthen your story by looking at the specific words you are using. Search your manuscript for words like “very”, “really,” and other adverbs or adjectives used to compound the effect of another word. They’re just a patch for terms that aren’t strong enough. Replace the patch and the weak term with something stronger.

For example: It was excruciating.

Similarly, search for words used to soften the effect of other terms, words like “a little,” “a bit,” and “somewhat.” Ask yourself if you really need them.

For example: I was scared.

I’d like to let you in on a little secret: every word you put on the page competes with every other word for your reader’s attention. This especially true for sections that are all description, dialogue, or exposition. If you go on at length about anything, many readers will just skim the whole section. Then only a fraction of your text will reach their minds.

So you have to prioritize.

That sentence probably jumped off the page at you. One sentence paragraphs are powerful, partly because they have less competition. That doesn’t mean you should fill your novel with them. Just remember that adding unremarkable lines to your work diminishes the phrases that are memorable. Your readers will only focus on a portion of what you put down. If you cut, you get to choose which portion.

Once you make an impression, don’t repeat yourself. You don’t need to summarize anything your audience has already read. Instead of making five different characters remark that your hero has green eyes like his mother, have one say he waggles his eyebrows like her, and another say his handwriting resembles hers. Use the space to impart something new and interesting about your hero to your audience. For emphasis, do it twice, tops.

That is, unless it’s a critical piece of foreshadowing. If his eyes are green because he’s descended from dryads on his mother’s side, and he uses dryadic powers to defeat the villain, then you might need to repeat it, to make sure your audience remembers. Even so, hinting at other dryad features would flesh out the world and the character better.

You’re writing a scene where your protagonist finds a family heirloom for sale at a shop – a heirloom that was buried with her brother. The focus of the scene is on her discovery of this item; the shopkeeper, shop, and other pieces are there by necessity. If you plug in a generic shop and standard shopkeeper, your plot will work, but you’ll lose an opportunity to develop your world and your characters. Instead, think critically about the components you’re working with:

And at every point, ask yourself how you can break conventions and buck expectations in a way that fits your work. Make the shop a roving wagon, or the shopkeeper a phantom.

If you are writing in first person or third person limited, you have an incredible opportunity to develop viewpoint characters – without even mentioning them. Everything that happens in a close viewpoint should be tinted by their personal perspective. The same person might be beautiful from one viewpoint, and ugly from another.

Use your character’s perspective to guide how much description you should write. Anything your character takes for granted should have a brief mention. Anything that is new or strange to them should be described in more detail.

A character’s viewpoint can impart subtle clues about their life and the world they live in. If a shirt is described as free of blue stains, your readers will know your character is used to clothes that do have blue stains.

6. Bring the Pieces Together

In a well-constructed story, the plot, characters, and world are inseparable. The main conflict should grow from the fractures you’ve created in your world. The twists in your plot should be driven by the unique choices of your characters. Your characters should be shaped by the world they live in, and the world should be irrevocably changed by their actions.

If you intertwine the disparate elements of your story, it will be easier for you to multitask. Simply moving your plot forward will flesh out your world and characters, because it depends on them. For instance, a long scar on a character’s arm can be used to:

And if you do it right, your audience won’t guess you’re foreshadowing. They’ll just think you’re giving your character a rich description.

Using description, exposition, dialogue, and action is a balancing act. Writers and their fans will never agree on the appropriate balance for a story. But they do agree on one thing: wherever you can, have your cake and eat it too.

Comments on Six Tips for Doing More With Less