Scifi characters have lots of ways to get around, from hovercraft to instant teleportation, but fantasy characters are always stuck riding a horse. In particularly edgy stories, characters might get to ride a camel or ride in a horse-drawn carriage, but most of the time they have to saddle up and make do with their equine mount.

But horses aren’t the only way humans* can get around. Our history is full of alternate means of transport that authors can draw on to escape the never-ending parade of mounted protagonists. By employing such alternatives, your story will stand out, and you’ll also get to do some unique worldbuilding. 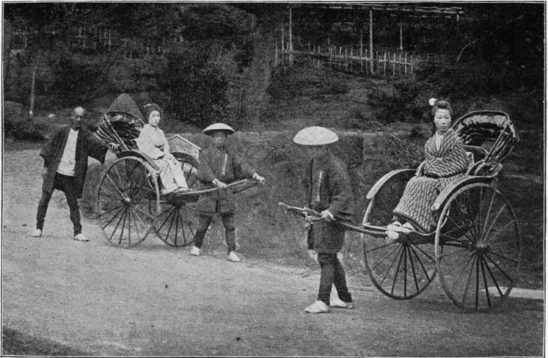 What’s better than a horse-drawn carriage? A human-drawn carriage! The rickshaw consists of a small cart pulled and steered by a person. For obvious reasons, the cart usually only seats one or two passengers, though larger carts do exist for the truly strong of calf. While the rickshaw is mostly associated with Asian countries, they’re used all over the world, and the design is simple enough to work anywhere with roads.

The biggest advantage of a rickshaw over horse-dependent transport is the lack of a horse. Horses are expensive animals. They require lots of food and careful medical care to stay in shape. Not to mention they’re hard to clean up after. A rickshaw driver skips all those expenses, and a city with rickshaws instead of carriages has a lot less manure.

Rickshaws are also a lot more maneuverable than large carriages, making them perfect for cities with narrow or obstacle-strewn streets. They provide a cheaper alternative to horses for wealthy and middle class people to get around quickly, and have proven very popular for just that reason.

Rickshaws are perfect for fantasy stories set in dense urban centers. A rickshaw driver even makes a great protagonist. They meet all sorts of people in a hurry to get somewhere, they’ve got to know the city well, and they’re guaranteed to be in good shape. That’s competence and a rich opportunity for plot hooks rolled up into one.

Growing up in Hawaii, I was surprised to find out that skis are more than just something you strap to your feet when you feel like careening down a mountain at unsafe speeds. Skis have been used for thousands of years as a way to move long distances across snow-covered terrain, and it’s not hard to see why. What would you rather do: trudge for hours through knee high snow or glide smoothly over it?

Skis are relatively easy to make, requiring only decent timber and some way to seal it against moisture. Skis can also be made of bone, which has all sorts of implications for Alpine Necromancers.

By definition, skis require snow to work, so they’ll only be common in settings with long winters or snows year round. Animal and even mechanized transport often becomes impractical once there’s enough snow on the ground, and skis are a lot faster than walking. Of course, skis don’t work so well over rough terrain, so your ski-borne protagonists will probably need a pair of snowshoes too. On the bright side, most skis are relatively easy to carry.

Another important factor in the use of skis is roads. Specifically, the fewer roads there are, the more important skis become. More roads mean more conventional forms of transport, making skis less useful. So if your story is set somewhere in the remote frozen north,* consider sending your protagonist out on a pair of skis. 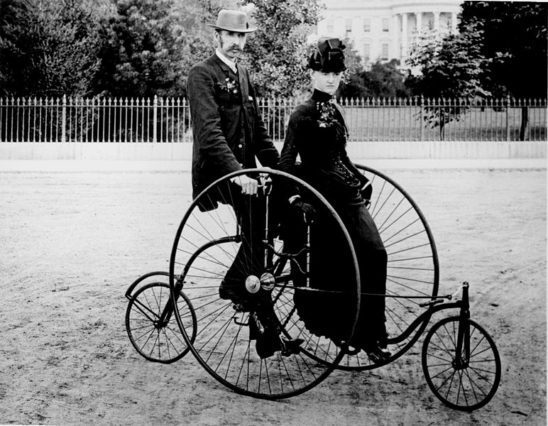 The bicycle feels like a very modern vehicle, but it actually dates back to the early 1800s, making it perfect for all your steampunk and industrial fantasy needs. The bicycle is a worker’s form of transit, not requiring all the feed and upkeep of a horse but much faster than walking everywhere. If your setting falls on the more fantastical side of steampunk, the bike will be popular because it’s so much easier to maintain and repair than steam-driven carriages.

Historically, bicycles have shown up in places you might not expect to find them. They were used extensively in both world wars, either as a cheap alternative to horses or in locations where mechanized transport wasn’t feasible. The first British casualty of WWI was a scout-cyclist, and in WWII the Japanese famously used bicycle-infantry to outflank the Allies and capture Singapore.

Of course, bicycles have some serious limitations. Most bikes don’t cross rough terrain well, and they work best on relatively flat ground.* Their carrying capacity is limited, though still better than a human on foot.

Like rickshaws, bikes work best in either concentrated urban areas, or rural areas with a good network of roads. In fact, bicycles and rickshaws are so similar that they’re often linked together, creating a vehicle where the driver peddles instead of running.

Because of their affordability and easy maintenance, bicycles are the perfect vehicle for a working-class protagonist. The evil Robber Barons have their steam-powered tanks and airships, but your hero is ready to take them all on while pedaling a trusty two-wheeler.

Another entry in the cold weather department, sleds are designed to slide over the top of low friction surfaces. Usually that means snow and ice, but sleds can also be used on sand or even wet grass. Some sleds ride atop metal runners, while others simply slide belly down.

Sleds operate similarly to skis, except with much greater capacity for passengers and cargo. Like skis, sleds are most often found in remote areas with very cold climates where they are essential to facilitate trade. Farmers use sleds to bring in supplies during the coldest months of winter, while hunters pile them high with meat and pelts.

Sleds diverge from skis in their method of locomotion. Often, sleds will be pulled by humans wearing snowshoes because there’s no other option available. If the snow isn’t too deep, sleds can be pulled by horses. The most iconic form of sled locomotion comes from teams of dogs, and this method is used most often in places where vegetation is scarce and it’s harder to feed horses or other herbivores.*

Sled dogs, in addition to being adorable, provide great storytelling opportunities, especially in fantasy settings with animal communication magic. Few things are more fun than a story about a ranger with enough animal companions to pull their sled through the tundra. The hang glider is even more modern than the bicycle, so can it really fit in a fantasy story? The answer is yes, though it requires some creative worldbuilding. The concept of a hang glider is quite old. Leonardo Da Vinci famously sketched designs for one back in the 1400s that at least looked structurally sound. The problem is that designs like Da Vinci’s require lighter, stronger materials than were available at the time. But in a fantasy setting, such material could easily be found.

Once the elves have agreed to part with some mithril, hang gliders become quite viable. They’d probably be modeled off birds at first, but as more people used them, other designs would become popular, including the triangular shape that’s well known today.

Hang gliders are quite fast* and avoid natural obstacles by gliding over them. They also have impressive ranges, often in excess of a hundred miles. That’s a nice bit of speed and distance for a fantasy protagonist looking to get somewhere quickly.

The main limitation of a hang glider is that, as the name implies, it’s a glider. It can’t take off under its own power. The most viable means of launching a hang glider is to leap from a great height, which works fine if your setting has a lot of cliffs in it. In a setting with flat terrain, towers would have to be built for gliders to launch off.

Hang gliders are also vulnerable to extreme weather, and the material needed to construct them wouldn’t be cheap. Taken together, they are the perfect form of transport for daredevil protagonists, gliding from one launch tower to another, always on the lookout for adventure. 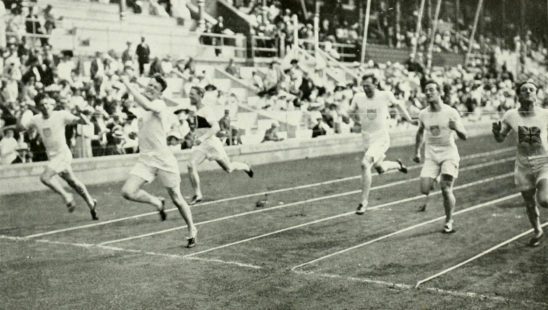 Those of us who work on computers all day might not believe it, but humans are actually some of the best runners on Earth. We aren’t great sprinters, but for endurance we are nearly unmatched. We’re much faster over long distances than horses, and we have a number of adaptations to help us. One of the most important turns out to be the way we sweat, which is our primary means of cooling down. So next time you’re smelly after a workout, know that it’s all in the service of making you a better runner.

Many cultures throughout history have taken advantage of human running capacity. The Inca, for example, employed long networks of runners to deliver messages across their empire. These messengers were highly trained, as they were the only way to quickly transmit information across the mountainous Incan terrain.

That “highly trained” part turns out to be a real catch. Most people today couldn’t outrun a horse over any distance, because our incredible running potential requires lots of training to bring out. Without it, we’re well below average in the movement department.

So if your characters are wizarding students who spend most of their time locked up in libraries, they won’t just be able to run everywhere, but if you’re telling a story about rough-and-tumble mercenaries, you have the perfect candidates. These grizzled fighters spend most of their time moving from one battlefield to another anyway, so why not have them do it on foot? They’ll certainly stand out, and all that cardio gives you an excuse to describe the ultra fit characters that fiction loves so much.

The horse is a tried-and-true staple of fantasy transportation, and there are plenty of reasons to use it. After all, the horse was widely adopted by nearly every culture in history with access to it. But the horse and other mounts are not always the best way to get around. If you push your story a little outside of the traditional fantasy mold, you’ll find a multitude of new options open to you. Transportation is only one of those options, but it’s a good place to start.

Or whatever fantasy race you’re using.
Or frozen south, if your world is Southern Hemisphere-centric.
Although, we have a lot of cyclists and a lot of hills here in Seattle, so go figure.
No word yet on how practical it is to pull a sled with reindeer.
Modern gliders range from around 20 to 90 MPH.

Comments on Six Forms of Transit That Can Replace the Mount