While dark tales of loss and suffering can be painful to experience, they’ve earned their place in popular media by helping us discuss important topics. Well-constructed dark stories affect us as few other things can, offering a chance to reconsider issues we thought we understood. For a meaningful experience, try these six tales. 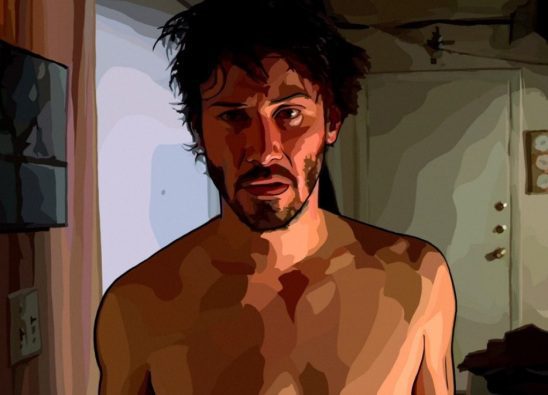 A Scanner Darkly is a movie based on Philip K Dick’s book. The movie starts in a not too distant future, where the government is entrenched in a brutal drug war. Substance D causes vivid hallucinations, delirium, and permanent brain damage, eventually leading to death. The severity of its symptoms intensifies the movie.

The story follows a member of the secret police, Robert Arctor, who is assigned to deal with the drug problem. To hide his identity, he wears a bodysuit anytime he’s at the police station. His employers wouldn’t hesitate to make him disappear if they found a reason to stop trusting him. The government resorts to extreme tactics; they even shock a protester and haul him away in a black van. The clash between freedoms and security come together in an old motif to ramp up the conflict.

No one knows who is making Substance D, so everyone is suspect. To maintain his cover, Arctor has to take D, which will either kill him or make him crazy. Regardless of the outcome, Arctor can’t win.

2. Hyperion: The Man Who Cried God While all the tales within Dan Simmon’s Hyperion are memorable, the darkest story centers on Father Dure. It begins as he gets exiled by the Vatican and decides to go to Hyperion to study the Bikura. The Bikura are the descendants of a ship that crashed on Hyperion, where they formed a symbiotic relationship with a cross-shaped parasite called the Cruciform.

Unique among parasites, the Cruciform doesn’t simply exert control or feed off the host; it’s totally devoted to the host’s survival. When the host dies, the parasite repairs flesh or even rebuilds the body and brings it back to life. Over time, the Cruciform changes the host into an asexual being with minimal intelligence. The prospect of becoming an immortal idiot is all kinds of awful. There’s nothing quite like a dip into the uncanny valley to jolt you out of your comfort zone.

The Cruciform uses pain to control its host; anyone who goes outside of the parasite’s home is hit with crippling agony. Father Dure learns this lesson the hard way – the pain’s so overwhelming that it causes him to pass out. He keeps attempting to escape, even though he gets dragged back by the Bikura every time. This form of coercion provides the illusion of choice, making it creepier than mind control.

While the story focuses on Father Dure, it tells us quite a bit about the narrator, Father Hoyt, as he recounts his return to Hyperion. He claims that he tried to convince the ship that brought him not not destroy the Bikura. However, he eventually admits that he was laughing as he watched the Bikura get bombed into oblivion. Such a powerful moment tells you a lot about him in a very short period of time. The Man Who Cried God is an unnerving and fascinating piece of scifi horror.

3. The Sandman: The Song of Orpheus, Brief Lives 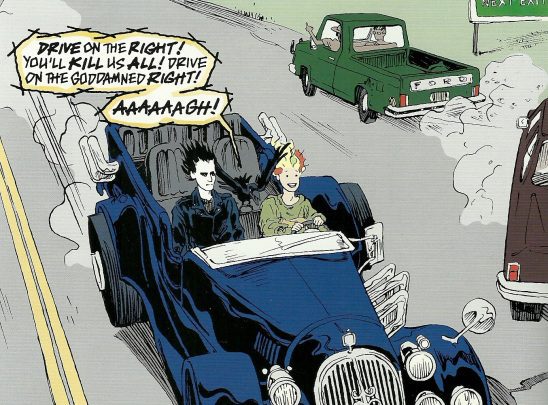 Neil Gaiman’s The Sandman is one of my favorite graphic novels, and The Song of Orpheus and Brief Lives are especially memorable arcs. They’re creepy and tragic for a variety of reasons, but they also develop Dream as a character.

In The Sandman series, there are seven siblings called the Endless that represent constants in the universe. The stories center around the Endless named Dream. He has god-like powers but often acts in ways that indicate human-esque shortcomings. He is resistant to any kind of change in his life and values the status quo. Dream is cold, proud, unempathetic, cruel, and petty.

Based on the old Greek myth, Orpheus’s Tale is about Dream’s son, a bard of unchallenged skill. After his bride dies on their wedding night, he begs Dream to help him revive her. When Dream refuses, Orpheus disowns his father and gets two other Endless, Death and Destruction, to help him instead. Not only does Orpheus fail to save his bride, but he is left in a permanent, helpless state.

Dream tells his son he’ll have to pay for his mistake. He abandons Orpheus, swearing they’ll never meet again despite his son’s pleadings.

When Brief Lives begins, millennia have passed since they became estranged. Dream goes on a quest with his sister Delirium to find their brother Destruction, who has gone into self-imposed exile. Dream has selfish reasons for starting the quest, but he eventually realizes how much Delirium wants to be reunited with her brother. In order to learn Destruction’s whereabouts, he goes back on his word and visits Orpheus, granting him a boon in exchange for this knowledge. Dream lets go of his pride, even though he knows there will be repercussions for doing so.

Dream is a great character. Not only is he interesting and strongly written, he is dynamic and goes through a significant character arc. He develops and changes over time as he softens and becomes a kinder person. He also realizes that change isn’t necessarily bad and starts to accept it. The Song of Orpheus tells us of what Dream used to be, and the whole series shows a gradual progression until Brief Lives, where Dream evolves the most. 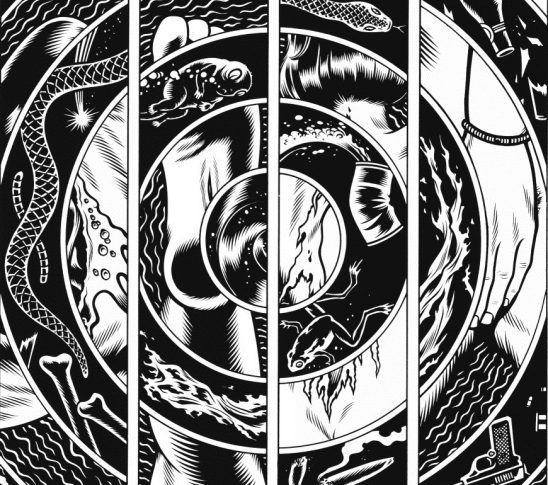 Black Hole is an amazing horror graphic novel by Charles Burns. Rather than go for simple shock value or gore, it deals with uncomfortable themes like social acceptance and the stigmatization of outcasts.

A sexually transmitted disease plagues 70’s high-schoolers in Seattle. The effects range from the drastic (growing a tail or an extra mouth) to the subtle (warts or molting). Anyone with the unnamed disease is subject to ostracization and persecution. Fleeing the oppression at school and home, the infected kids create reclusive communities in wooded areas. It’s appalling to see children face such intense social stigmatization that they feel the need to run away from their families.

The art in Black Hole is top-notch; it uses great imagery and symbolism to establish a creepy atmosphere while avoiding gore or other cheap tactics. Gore has its place in storytelling, but it’s nice to see a horror story that’s still horrifying while refraining from shock value. The black and white art is also a nice change of pace. Color makes a story more vibrant and memorable, but without it you’re left to focus on the impressive imagery.

Black Hole also introduces some moral conundrums to ponder. When an infected kid gets harassed at KFC for his appearance, it’s unsurprising that he pulls a gun on the other man (hunger can act as a very strong motivator). However, it’s what the kid does next that’s really shocking: he spits in the mouth of his harasser, infecting him . While his actions are reprehensible, they’re understandable considering the circumstances. Someone who’s cornered may get desperate and commit atrocities. Black Hole makes you wonder how horrifying social structures can be to those who fall outside of them. 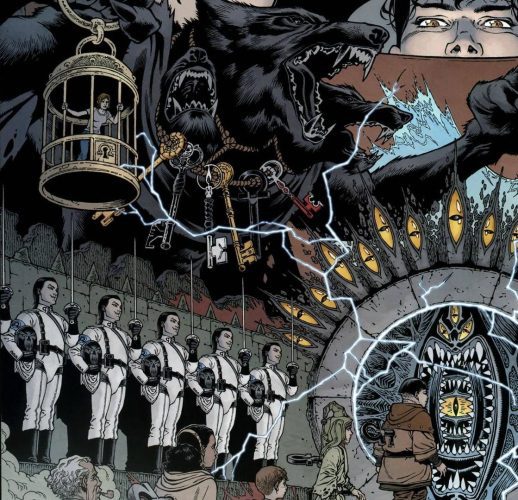 The Lockes experiences one tragedy after another. When the father is murdered, the family moves to Lovecraft, where things only get worse. The children – Bode, Kinsey, and Tyler – are all strong characters, but they also have flaws. Kinsey gets the opportunity to alter her mind magically, and she chooses to remove her fear and sadness. This makes her prone to risky behavior with lasting consequences. Nina, the mother, deals with alcoholism in the wake of losing her husband. The juxtaposition of strengths and weaknesses makes all of the characters fascinating.

Manipulation and control are big themes in Locke and Key. In addition to being a great villain, Dodge is conniving, cruel, and totally ruthless. He integrates himself into the Locke family, becoming friends with Tyler and romancing Kinsey. This deception is especially creepy because – as the audience knows – Dodge orchestrated the death of their father.

Later on, we discover that Dodge’s soul is manipulated by a demonic power even worse than himself. Having a villain that isn’t fully in control of his actions makes you wonder which part of Dodge is really there and which isn’t.

In the conflict between Dodge and the Locke family, both sides experience victories and losses. A variety of magical effects are used in battle. This wide range of characters, weapons, and tactics creates a compelling struggle.

6. Behind the Mask: The Story of Leslie Vernon 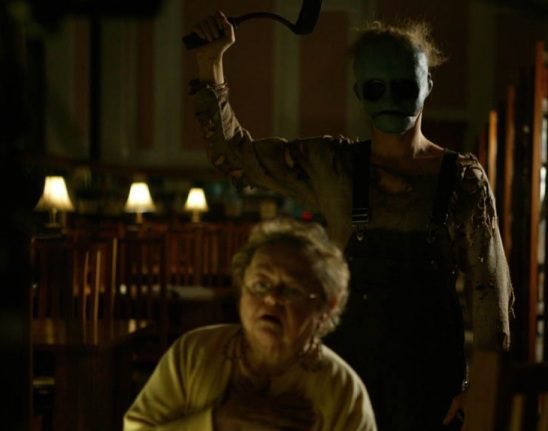 In Behind the Mask, a group of film students follow Leslie Vernon, a man who intends to become infamous like Freddy Krueger and his ilk. Rather than focusing entirely on the victims, this movie shines a light on the serial killer and the structure of horror movies.

When the film crew shows up to Leslie’s house, he introduces his pet turtles to them. This mundane moment is derailed when he says, “I only keep pets that I can eat.” The movie is filled with unnerving moments like this. Switching between horror and comedy gives you the heebie-jeebies while still making you laugh.

Typical slasher flicks are a mishmash of bad decisions and convenient plot holes; Behind the Mask avoids such pitfalls by having Leslie explain his entire plan to the film crew. Every step of his killing spree seems sensible, and it shows how he uses fear to manipulate his victims. It makes the final scenes feel realistic rather than staged.

Behind the Mask deconstructs slasher movies and their formula. Everything is discussed, from the epitome of good (referred to as an “Ahab”) to a breakdown of the female protagonist (the survivor). You’ll never look at these films the same way again.

By dressing difficult topics in fantastical themes, dark works remove some of the stigma when real life is too personal or painful to discuss. These stories offer the safety of hypothetical situations but are still injected with the emotion we need to give them the attention they deserve. A good dark story won’t just rattle you; it will challenge you to think, to talk, and to change.