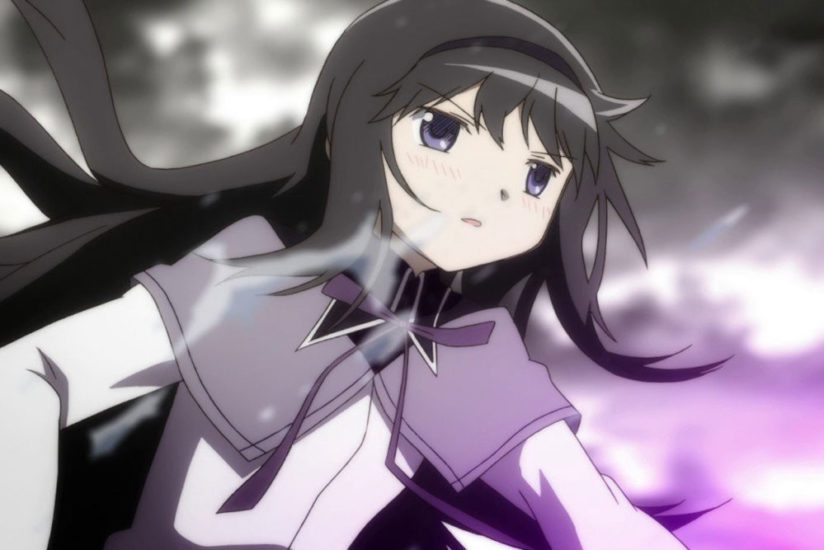 Homura from Madoka Magica appears antagonistic before viewers get to know her.

Creating a sense of mystery requires depriving your audience of knowledge, whereas relatability and sympathy require building audience understanding. That means, to at least some degree, these two traits work against each other. Many writers have sabotaged their characters by trying to have it both ways, achieving neither goal. Let’s examine what it means for a character to be mysterious or relatable and how to choose one for your character.

Let’s start by going over each trait, what its benefits are, and what it requires.

The goal of a mysterious character is to leave the audience guessing about what is happening inside a character’s mind. That means readers may not know:

For a character to feel mysterious, they have to be viewed from the outside. A common mistake is narrating from the viewpoint of a character the writer wants to be mysterious. An intimate look inside a character’s head will dispel their aura of mystery and instead encourage understanding. At that point, if you try to deprive readers of crucial information, you’re only creating a meta mystery. Readers are just as likely to be frustrated as intrigued.

What mystery excels at is making a character creepy, menacing, wondrous, or even awe inspiring. So it’s a fantastic choice for a fairy godmother, a ghost haunting the library, or an ancient alien intelligence. Those are all novel character concepts that benefit from extra atmosphere.

In practice, mystery is often also used by storytellers to feed characters candy. That’s because characters look more impressive and invulnerable when we can’t see their inner struggles. This isn’t always a good idea, but it depends on the role the character has.

Narrating from a character’s viewpoint greatly enhances their relatability. Readers get an intimate account of what they are thinking and feeling, and it’s much easier to provide information on any events that have impacted them. However, that doesn’t mean you should give a POV to every relatable character. Readers mostly need to be attached to your most important character; side characters can be relatable enough without featuring their POV. If you have a central character you’d like to be sympathetic even though they act like a jerk sometimes, that’s when it’s most valuable to use their viewpoint.

Putting the audience in a character’s shoes doesn’t keep them from being novel. On the contrary, if your character is based on a novel concept – like a garden gnome or a hologram – digging into more detail about them can help you generate interest.

Can You Do Both?

While these traits are largely incompatible, they can still be mixed a little in some situations.

First, it’s typical to transition a mysterious character to a relatable character as the story continues. A character’s aura of mystery will dissipate once the audience has enough time with them anyway. At that point, there’s no reason not to make them relatable. Strategically revealing sympathetic information about them piece by piece will help ensure that once the mystery is gone, you’ll get audience attachment instead.

Similarly, if you aren’t using a character’s viewpoint, you can introduce them with both sympathetic and mysterious aspects. Maybe your hero meets a new friend with a heartrending backstory, but that backstory doesn’t explain why the new friend disappears at sunset every night.

Technically, you can also make a relatable character more mysterious, but you’ll need a plot that supports it. Perhaps a character seems relatable, but only because they’re pretending to be someone they’re not. Alternately, if enough time passes or you have room for lots of character change, someone who was once familiar can grow strange.

Finally, a character who’s relatable can still have personal mysteries, but they have to be mysteries to the character themself. An obvious and well-used example is an amnesia arc. However, you can also have a relatable character wonder about their parentage or what monster they’ve been turning into. They might have strange feelings they don’t understand.

Choosing Based on Character Role

The role your character plays in the story is often the determining factor in whether a character should be mysterious or relatable. Because storytellers often want candied characters to be mysterious, I’ve paid special attention to where a character who is both candied and mysterious can benefit a story.

Sorry, folks, but you don’t want to make your main character mysterious, especially not in a narrated work. When it comes to engagement, the purpose of the main character is to give the audience something to care about. That will be severely obstructed if you try to hide important information your main character knows.

Even if you want your main character to be evil, getting in their head will offer the audience more novelty. For instance, the titular Artemis Fowl is a main character who gives the book’s young readers the wish fulfillment of being a slick supervillain. But readers are still shown intimate details of his life to build sympathy. Even though he’s just a kid, he has to care for his sick mother. And having a supervillain main character pays off, because we get to watch him think through his diabolical plans. If he was a mystery, he would be like any other villain.

The only time an intimate glimpse of the main character isn’t beneficial is if they are so unpleasant you need to keep your distance. In those cases, I would strongly recommend a different main character. The only time to do that is if it’s the only way to tell the story you want to tell.

While it’s strange to put these two roles together, they have similar trade-offs in this case. If you want someone mysterious and candied on Team Good, a love interest* or a mentor is a pretty good choice. That’s because the glory they get can rub off on the main character. Having a cool date or learning from someone super cool is wish fulfillment in itself. A mysterious love interest can have extra allure, whereas a mysterious mentor might be awe inspiring.

However, both of these archetypes are also likely to steal the protagonist’s spotlight. Make sure your protagonist has plenty of agency. The love interest should never relegate the main character to a passive witness. While the mentor can take a little agency away at the beginning, they shouldn’t do it for long. By the climax, the mentor generally needs to be taken out of the action. Regardless of whether your story is told over a novel or a whole series, you’ll want the main character to outgrow the mentor by the end.

Generally, the audience will be more invested in learning about the love interest than the mentor, because learning about a love interest is part of romantic bonding. A love interest’s backstory will shed light on their personality and help the main character get closer to them. But a mentor’s backstory or secret motivation will only matter if it impacts the plot. Otherwise, it won’t make a good reveal.

For our current purposes, this includes any other character on Team Good who is less central than the main character but still important to the story. It doesn’t include minor characters who only appear for a chapter or so.

Ultimately, you’ll want the audience to like these characters. Similar to a main character, hiding important information can lower emotional investment in them. However, if the sidekick is introduced to the main character during the story, it’s okay if they’re mysterious at first. Communicating everything about them immediately would overwhelm audiences anyway.

However, you’ll generally want to dispel their mystery quickly, because it provides little benefit. That is, unless their secrets are plot critical. If they’re a spy for the villain or a construct with a magical item hidden inside them, then by all means, make them mysterious for a while. What’s important is that withholding information pays off enough to make up for greater emotional distance. Simply learning a sidekick’s history won’t provide audiences with that payoff.

Of all character archetypes, sidekicks are also the most destructive when over-candied. Audiences are likely to resent side characters who show up the main character. Don’t use mystery just to make a sidekick cool.

Villains benefit the most from being mysterious, though it depends on what type of villain you’re using. If you have a big bad that you’d like to be very threatening and even scary, then mystery is essential. Once a villain becomes familiar, they simply aren’t as scary anymore. A mysterious villain can also be more creepy and unsettling.

In contrast, many stories have a less powerful antagonist who later joins Team Good. If this is the plan, you’ll need to build sympathy for the antagonist before their conversion. That way, the audience wants to see them redeemed. This requires dispelling their mystery and letting the audience get to know them.

Other villains may be somewhere in between. A former best friend may grow strange after using corrupting magic for years. Revealing the backstory for a mysterious villain can make their former life feel relatable. Generally, the more familiar and relatable your villain is, the more well-rounded they need to be. Super evil villains often come off as comical if the audience sees them too much. A villain with a lot of speaking time needs nuance, including positive sides to their personality.

Altogether, as long as your villain is threatening enough to perform their role in the story, you can make them as relatable or mysterious as you like. Villains also benefit from candy. That is, as long as you let your main character get the better of them by the end.

As a general rule, storytellers go straight for the flashiest story elements while neglecting their story’s foundation. For this reason, we’re more likely to make a character mysterious that should be relatable rather than vice versa. Double-check your mysterious characters to ensure that those mysteries are worth lowering audience attachment.

This might apply to a platonic relationship as well, but they come in all shapes and sizes, so it depends on the details. A creature or animal is a good match for mystery.