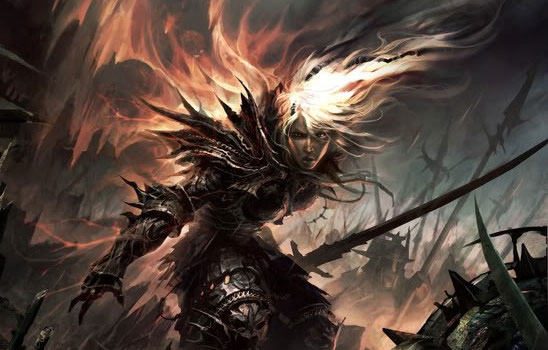 Villains and monsters are both antagonists. However, they serve different purposes and provide their own flavor to stories.

To illustrate why you might use one over the other, I’ll use the Chronicles of the Black Company by Glen Cook as a case study. The series follows a mercenary company of the same name as they encounter many dangerous foes. I will be discussing Soul Catcher and The Dominator, a villain and monster respectively.

How Are They Different?

Villains are generally human – or human-like, at any rate. As a result, they have relatable qualities, goals, motivations, and personalities. Soul Catcher has a great many qualities that make her a relatable, though ignoble, character. She is driven to beat her twin sister, Lady, who has been more successful than her. In one arc, she kidnaps Lady’s paramour Croaker. She does this for several reasons, but two of them are notable. Firstly, she wants to spite Lady and take what she has.  Secondly, she is lonely and desires human companionship. These qualities don’t belong to your average monster.

Villains can also interact with characters non-violently. In one scene, Soul Catcher confronts her enemy, The Limper. Rather than fight him, she merely tells him that his boss, Lady, found out that he left the city he was supposed to be guarding. He leaves in a hurry, knowing that he is in serious trouble. Of course, Soul Catcher encouraged some rebels to start a riot during his absence, ensuring his punishment.

Monsters, on the other hand, are, well, monstrous. Most are much larger than humans – either as a single body, or in combined mass, like a swarm of locusts. Most of them don’t bother with trying to look human, instead bulking up into beast-like, threatening shapes.

Of course, monster isn’t a cut and dried definition – it’s a sliding scale. At one end is a monster that has all of the monstrous traits. I consider Jaws to be a very “pure” monster. Jaws only wants to eat ocean enthusiasts, communicates with his teeth, and doesn’t look human. At the other end, we have antagonists that have both villainous and monstrous qualities. Pennywise from Stephen King’s It is one such example. It is wholly inhuman in its true appearance, feeding is a priority, and generating fear is a major quality. However, it also communicates non-violently, and is motivated to harm the main characters out of spite rather than hunger. Pennywise has traits from both ends of the spectrum, and it makes for an interesting antagonist.

Monsters are usually so inhuman or aberrant it is hard, if not impossible, to relate to them in any meaningful way. The Dominator is a god-like wizard that drives the Black Company and other major characters to action. He interacts with the characters much like a natural disaster, indiscriminately destroying everything in his path. His goal is to control everything. If he can’t control it, he destroys it. He never communicates with the protagonists in a meaningful fashion, nor do his motives seem to be anything beyond a lust for power.

When Should You Use a Villain?

When you want fully developed, interesting characters, use a villain. Soul Catcher is complicated and intriguing. One scene highlights her love of chaos and cruelty in particular. Soul Catcher and the Black Company must work together to defeat a powerful wizard known as Raker. She finds him, but does not kill him. Instead, she enchants an altar with a powerful magic aura. Underneath the altar is a wealth of gold and gems. She writes upon the altar that anyone who places the head of Raker on it can have the treasure trove the aura protects. Word passes quickly, and the city begins to tear itself apart to get at the treasure. She later tells Croaker that she cares little whether Raker actually lives or dies. Instead, she wanted to sow fear and discord among the rebels, break their will, and humiliate Raker. Bringing chaos to Raker’s city was an enjoyable bonus.

If you want your protagonists to develop, a villain can catalyze character change. A villain can interact with characters in a more nuanced way than monsters. A hero who converses with a villain might find their dedication to their ideals stronger than they thought – or they may find themselves tempted. Soul Catcher and Croaker have a dynamic relationship that changes from employer, to foe, to captor. In one scene, she terrifies Croaker into silence after she murders the Hanged Man, making him reconsider his relationship with her.

If you want to contrast the qualities of your hero, you need a villain. Contrast is useful because it can highlight the strong traits of any character. While they are both violent and capable wizards, Lady and Soul Catcher are quite different. Lady represents order, and runs her government efficiently. When she joins the Black Company, she integrates well with the military structure. Soul Catcher is a being of chaos. She sows discord, tries to break apart the Black Company on several occasions, and seeks to topple governments by sowing confusion and violence.

A few well-placed villains can make a story’s setting seem more natural. Your protagonists should not exist in a vacuum unless you want to create a very detailed character study. If they are the only movers and shakers in your setting, things are going to get stale quickly. Adding another character is like adding another colored strand to a weave. A wider range of colors makes for a more realistic, and interesting, picture. I’d get bored of The Black Company if it focused solely on Soul Catcher, but the series has more than a few competing villains. Each one brings something new and exciting to the story.

Villains make for better reoccurring characters. Most heroes aren’t murderous, and villains are close enough to people that they can’t getting away with just shooting them in the face. Considering the Black Company consists of a great many violently-inclined soldiers, they serve as a bad example here, but imagine if Superman punted Lex Luthor into space. That would make it difficult for Luthor to come back and bother Superman. Instead, Superman has to deal with Luthor in a non-lethal fashion, allowing him to become a reoccurring character. For a longer series, it’s easier to use a reoccurring villain than create new ones for every arc. That being said, you should have a stable of villains to draw from.

When Should You Use a Monster?

When you want to focus on the major characters, a monster is a good choice. Because monsters are simpler antagonists, they shine a spotlight on the heroes and their efforts. Very little time is spent explaining what Dominator is like or why he is that way. Instead, focus is spent on more interesting characters, such as Raven and Croaker, and their journey to defeat him. Monsters cannot carry the story like a villain can; they need strong heroes to fight. Those heroes will have plenty of space to develop as characters without the monster upstaging them.

Instead of adding tension, as villains can, monsters add threat. They provide a more straightforward motivation than a villain. That’s why they are more common in horror stories. Sure, villains can invoke fear, but it comes more naturally to monsters. It’s easier to be scared of something you can’t relate to, and their large scale frequently makes them very dangerous. Soul Catcher’s plots threaten the Black Company, but the Dominator threatens everyone. If he rises unimpeded, he will restart his empire. This brings together Lady and Croaker, who were previously enemies. If you want a strong motivating factor for your heroes, monsters serve better than villains.

Battles with monsters are usually short, violent, and very exciting. They also generally end in the demise of the monster. While heroes may have problems killing villains, they usually have no such qualms regarding monsters. The Dominator does not return meaningfully after being cut into pieces and burned. He’s great for a single arc, but he is not used as a reoccurring character like Soul Catcher is. If you want a short but exciting fight, a monster is a stronger choice than a villain, but be aware that most monsters don’t return for round two.

Villains and monsters have their purposes, but they are used differently. Monsters put the focus on the heroes and their struggles, but villains are another character that adds depth and drama to the story. That being said, there is no reason they can’t work together. As a power combo, they can fill your story with tension, conflict, and threat.

Comments on Should You Use a Monster or a Villain in Your Story?