The first choice I make when I start a new campaign is which type of world to set it in. Setting a campaign in an open-ended world fills it with mystery and rumors about what lies over the next ridge. It’s ripe for unbound exploration. Building a campaign on a structured world provides it with a rich history of nations and factions. Heroes had best watch their step, or they may find themselves in the middle of an entrenched conflict. Plot complexity, campaign themes, and level of world detail are all informed by this choice.

Open Worlds Are Flexible, but Slow-Building

The standard setting for Dungeons and Dragons 4th Edition is a great example of an open world.  The basic premise is “points of light” in a world of darkness.  The darkness is the vast untamed wilds, and the points of light are a scattering of relatively safe places where civilizations have been able to take hold.  Villages and even cities know little of the world beyond their closest neighbors.  A party of adventurers can set out from one of these points of light, and there are few expectations or limits on what they may encounter in their journey.

An open world has many advantages for both game masters and players.  The game master has less overall campaign preparation to do, as they have the option to build the world as they go.  And if a game master feels the campaign is becoming stagnant and needs a change in direction, they can have the party come across an entirely different area without much concern about making it fit in with what has come before.

The downside to an open world is that in-depth conflicts take more play time to build anticipation. Since places and characters are introduced as you go, players need to be exposed in-game to a large variety of places and people before plot connections between them will feel significant. A story arc based on court intrigues, for example, will take longer to establish if the majority of political players are unknown at the beginning of the game.

Basing a campaign off of the series A Song of Ice and Fire would be taking the path of a structured campaign. The world map is drawn up ahead of time. Political factions and major players across the world are already established.  Characters in the party can be expected to have a fair knowledge of the details of Westeros, allowing the game master to draw them into complicated schemes and relationships in the first session.

Pulling off a setting that has a lot of structure requires a lot more preparation from the game master, however. The game master will need a good understanding of the existing geography, factions, and other key elements.  They will also need to understand how those elements interact. Ultimately, whether or not a world feels alive is dependent on how engaging the game master is. A game master that knows the setting inside and out will have an easier time pulling players into it.

It can also be more difficult for some players to jump into a campaign with a structured setting that they are not familiar with. If a player doesn’t know the setting very well, they could be less inclined to contribute to the party’s direction. This can happen in any campaign, but structured worlds are particularly prone to it since the players are aware that so much of the world is firmly established. Having information that is easily accessible to players on what is common knowledge for characters is a little bit of extra preparation that can make a big difference.

How Much Structure is Right for You? 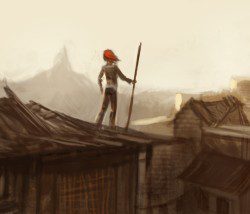 Of course, you aren’t limited to binary options: your major political and military factions could be plotted out in advance, for example, while leaving the leaders of those factions to be defined as inspiration comes to you in game. I usually prefer to have the framework – geography, nations, religions, and major factions –  structured in advance. After building and revising the world, it develops an internal logic that guides me through the campaign, and makes it easy to come up with more details for the world as needed.

Where you should structure the setting in advance, and how much, is a matter of storytelling style and comfort. No matter your style, asking yourself the following questions can be helpful:

Will your campaign be focused on a story arc that you want to tell? If so, it will be helpful to outline, as a minimum, the major actors and locations for each point of plot advancement.

What parts of the world are the players going to be focusing on? It might feel like every major city should receive equal time when developing the setting, but if the party only ever visits two cities during the campaign, then much of that work won’t have any practical effect on your game.

What do you need to plan ahead of time in order to feel comfortable as game master? This is the most important question to ask. You need to know how you want to move the players through your game. If you find it difficult to determine how your major NPCs react to player actions and suggestions, it can be helpful make an outline of their motivations to refer to during play. Or, if your mind goes blank when a player decides to start roaming a city just to see what they find, having a map with the city districts and features on hand might be a good idea.

There is no one-size-fits-all campaign. Whether you decide on a completely open world, a fully structured environment, or something in between, if you aim to tailor your world creation to both the needs of your campaign and your preferences as a game master, you will be off to a strong start – and hopefully, a memorable campaign.