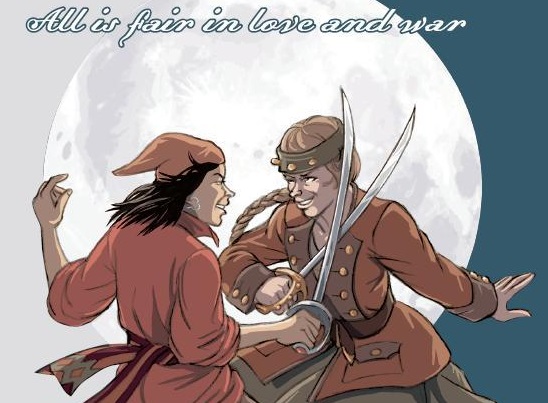 Love. It’s a many-splendored thing. It’s all ya need. It will, we are told, lift us up to where we belong. And yet, while love stories are omnipresent in media, even if mostly as tacked-on subplots, they don’t have a place in most roleplaying games. Interpersonal relationships are often on the sidelines, and when there is romance, it’s rarely a focal point. Sometimes player characters have long-term relationships, but their significant others exist almost exclusively as a plot hook for the GM to kidnap. Or romance is played out through seduction, which works like a form of combat.

Shooting the Moon, by Emily Care Boss, is a story game that doesn’t just allow for complex and nuanced relationships – it demands them. It is a love story game. Specifically, Shooting the Moon guides players through the ups, downs, and heartaches of a love triangle. And like a proper love triangle, the game is messy, awkward, and occasionally volatile. But even when it’s a mess, it’s exciting and fascinating. Just like falling in love.

Setting Up Is Flexible and Easy

Shooting the Moon tells the story of two people each in love with a third; in the language of the game, two suitors have their eyes on a single beloved. While you can play with just two players, each suitor for an NPC beloved, the game is more dynamic with a third player to make the beloved a fully fleshed out character. But there’s no room for more players than that, nor is there a GM. Other characters, if they exist at all, are minor; the suitors and the beloved are the only people who matter in this story.

The game’s rulebook has a vaguely piratical theme: swashbuckling adventurers on daring quests and whatnot. But Shooting the Moon is setting agnostic. Like many story games, its goal isn’t to realize a particular location but rather to realize a particular narrative. In this case, whether you set your game in the real world, deep space, or a dragon-infested fantasy, you’re still going to tell the same story: the two suitors wish to catch the attention of the one beloved, who is either unaware of their affections or torn between them.

The players create scenes that force the suitors and beloved to interact with one another and face dangers appropriate to the genre you’ve picked for the game: from privateers to dragons, to dragon-riding privateers. But of course, the danger itself isn’t meant to be threatening, because love stories so rarely end with the protagonists getting eaten by monsters. This is a game where your survival is guaranteed; what’s at stake is how good you look doing it.

Even though there are only three characters, character creation is long and drawn-out, not because the characters require math-heavy optimization, but because the game strives to make the relationships between characters strong and interesting. Specifically, there needs to be chemistry between the beloved and both suitors. Characters are expressed through “attributes”: simple one- or two-word descriptions of the characters’ attitudes or abilities. The beloved gets theirs first, because they’re the most important. These traits are supposed to indicate how they are ideal. If you are running with the piratical theme, they might be “tough,” “daring,” and “witty.” Great things for a swashbuckler to be.

More importantly, this means that the suitors have chemistry with the beloved. After all, romantic attraction tends to be associated with shared interests and attitudes, and strong relationships are built on complementary abilities and mindsets. The suitors are therefore made in such a way that they make sense in a relationship with the beloved. Rather than declaring that characters are a viable romantic pair because they happen to exist in the same universe, each suitors’ attraction to the beloved is justified from the ground up. And importantly, they’re equally justified.

Additional traits are available to flesh out the three characters, giving them backgrounds and life goals and things of that nature, so that players can dive into roleplaying easily. These are useful, but they’re also ancillary. The core of character creation, and the core of the game as a whole, is in these defining traits that produce a trio of characters who mesh together in interesting ways.

Gameplay Is Interesting, but Fiddly

One natural problem with a love triangle is the risk of a foregone conclusion. There’s no love-triangle tension when it’s clear from reel one that Katniss hearts Peeta 4-EVA, and Gale will never match up. And even though both suitors are compatible matches for the beloved, it’s entirely possible that one pair of players will play off each other better than the other pair. There’s nothing wrong with being the loser, but love triangles are interesting when they’re uncertain, which is why dice get involved in Shooting the Moon. They keep things messy.

Over the course of several scenes, the suitor players will cause trouble for each other’s characters. One player sets up a scene where her character has a chance to show off for the beloved, and the other player figures out what goes horribly awry. Scenes are meant to build up to a single, dramatic moment when the suitor has to prove themselves. To resolve the roll, you make a little dice pool for yourself that can be larger if you can pull in some of your traits. You roll against a pool of set size controlled by the other suitor, and whoever rolls best determines whether the scene ends well or poorly. Of course, there are several rounds of scenes, so just because you make an ass of yourself in front of your beloved now doesn’t mean that everything is ruined.

The better a suitor does in these scenes, the more points they get. The more points they get, the more dice they roll at the grand finale, when it’s time to discover who the beloved will choose. Getting lots of points will maximize the chances that your suitor will get their happily ever after. But while more dice are good, dice pools can be very swingy. You don’t know what kind of love story Shooting the Moon is going to be. Sometimes, the idiot who messes up every interaction with their beloved ends up winning the day. Sometimes the one who looked dashing and perfect in every interaction, well, they turn out to be dashing and perfect. And sometimes, when both suitors have been unlucky, the beloved ditches them both and goes off to bigger and better things.

There’s an underlying tension that can’t go away and that is particularly fitting for a love story. But at the same time, there’s a disconnect there. There is an incentive to play the game well, acting in ways that get you the most dice and maximize your odds of success. This is worsened by the complicated rules about how you can add dice to your pool: some traits are worth more dice than others. From a game standpoint, it makes sense to jump through hoops to make sure you use those traits and get those extra dice. Instead of making decisions as your character would, or even making decisions to improve the flow of the story as a whole, you are encouraged to make decisions that help you win.

The Endgame Is Often Frustrating

While the uncertainty created by the dice makes Shooting the Moon’s love story appropriately unpredictable, it also introduces an unavoidable problem: it strips the beloved of agency. After all, they pick who the dice tell them to pick. Their love is determined by chance, rather than by any actual desire on the character’s part. This is a purposeful choice by the author, and while it’s justified, it also creates some uncomfortable situations.

If you’re playing with only the two suitors, and the beloved is an NPC, it makes sense that dice decide how the game ends. But it does mean that a game which is ostensibly about romance is also about gaming the system. The conflicts disrupt scenes and take attention away from the developing relationships between the suitors and the beloved. It’s not as bad as rolling to seduce, but it does make romance uncomfortably combative.

With someone playing the beloved, it’s even stranger. It introduces the possibility that the beloved will reject both suitors, which is a fun and often underused twist on the love triangle, but now instead of gaming an NPC, players are gaming someone controlled by an actual person. An actual person who loses the authority to declare who their character is in love with. The “who will they choose?” tension makes sense for the suitors but not for the beloved, who should be allowed to choose their own fate.

It almost makes more sense to strip away all of the core mechanics of the game: no dice, no points, just a beloved who sees what their suitors do and makes an appropriate choice at the end. And yet, part of what makes success and failure meaningful is the knowledge that they’ll impact your ultimate fate. All RPGs rely on a conceptual buy-in from the players: you need to accept certain conventions about what you’re playing and act appropriately. Shooting the Moon requires more than most, demanding players who won’t metagame even when the incentive is there and a willingness on the part of the beloved to let the dice determine their own opinions.

Shooting the Moon isn’t perfect, and sometimes the endgame is a letdown. If one suitor really comes to feel like the better match, it’s disappointing if they are rejected by the beloved. It can be disappointing even if you’re the other suitor. But despite its faults, Shooting the Moon is a rare example of a game built to accommodate love and relationships in a nuanced way, rather than built to better simulate hitting people. Maybe it’s not perfectly successful, but it is filling a niche that few other games bother to consider.

Making Your Story Games Horrifying (in the Good Way)

Comments on Shooting the Moon, Like Falling in Love, Is a Beautiful Mess