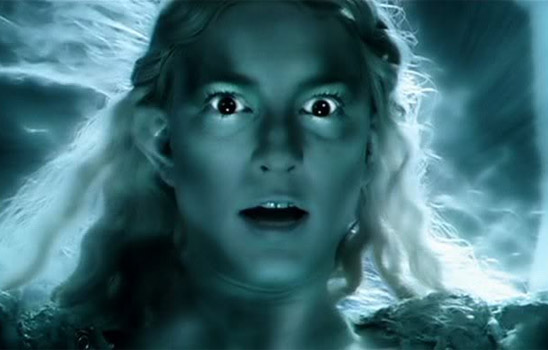 As she contemplates taking the one ring, Galadriel's voice transforms.

This is part 2 in the series: The Mechanics of Dialogue

What you write between double quotes isn’t just ideas on a page; it’s notation for vocal sounds. Thinking of dialogue as sound will help you shape the voices of your characters and communicate their tone to readers.

The Subtlety of Interpreted Sounds

It can be hard to think of dialogue as sound because so little of it is stated directly. 99% of a character’s voice is implied through word choice. Readers listen to people speak every day. They know what tone goes with what words, even if they don’t understand it consciously.

For instance, let’s say you’re writing a scene where one character is about to leave the house, and another character is going to say something to keep them from leaving. You could have either of these lines:

“Stop right there,” she commanded.

That’s just redundant. There’s very little use for these tone labels in writing. If your dialogue is strong, they aren’t needed. If it’s weak, they won’t make up for it anyway:

“Wait for me,” she pleaded.

Your biggest task in writing dialogue is to supply phrasing that enables readers to interpret the tone. Until you master that, forget about the poetic beauty of your character’s words. Sure, “stop right there” and “don’t leave me” aren’t the most creative phrases in the lexicon, but that’s what makes their tone so clear – readers will have heard them before. Your characters will know them, and so they’ll use them too.*

And if you trust the reader to fill in those tones, you never have to worry about doing this:

“Stop right there,” she pleaded.

“Don’t leave me,” he commanded.

That hurts my skull something fierce. Words and tone have to match.

Let’s say you have a line of dialogue you really like, but its interpretation is ambiguous. We’ll say your line is “Wonderful.” It should sound sarcastic, but your readers don’t know your character well enough to guess that. How do you make it clear?

Instead, provide the context the reader needs to correctly interpret the tone. Generally, that comes from the other missing component of dialogue: body language. In the case of sarcasm, any negative body signal will do.

He rolled his eyes. “Wonderful.”

Even so, you should ask yourself how your dialogue can hint at the tone better. In this case, another word or two can help the line feel sarcastic.

He rolled his eyes. “Just wonderful.”

Many over-reaching tags can be replaced with this method. Do you want your character to whisper?

In almost all cases, you should not use any description of the vocal sounds characters make. When you do, it’s best to describe the general sound of the character’s voice as a separate item before they speak.

I didn’t like listening to Uncle Marvin’s stories. His sluggish, rasping voice clashed with my aesthetic sensibilities. But that evening he cornered me, and there was no help for it.

Admittedly, some signals can change the vocal sounds of your dialogue, but don’t become dependent on them. They can supplement a finely tuned sense of tone; they should never replace it. If you use them all the time, you’re in trouble.

An exclamation point indicates that the speaker has raised their voice to a higher volume. There’s two reasons we do that:

1. The person we’re speaking to is far away.

“Yippeeee!” He pumped his fists.

“I said shut up!” She slammed the door.

“Get away!” He stumbled back toward the bed.

If you want to use an exclamation point for excitement, your character has to be as emotional as the clips above. That’s why you shouldn’t use exclamation points all the time. No one is constantly that emotional. And if they were, readers wouldn’t want to hear about it. It’s exhausting.

Vocal stressing occurs when the speaker draws out a syllable to call attention to a particular word. A stressed syllable can be indicated by either putting a word in all caps or by using italics. Always use italics instead of caps. It looks more sophisticated, less melodramatic, and it works with other uses of capitalization.

Again, stressing occurs on one syllable only. By convention we italicize the whole word, but the words most likely to be stressed by speakers are short, often containing just one syllable anyway.

In most cases, the decision to stress a syllable isn’t merely stylistic. It changes the meaning of the line. For instance:

Your character might also want to call attention to a word for more playful reasons:

“You tossed whiskers out the door. Doesn’t that make you a cat-apult?”

More rarely, your character may be stressing the word for emotional emphasis. Be careful, as this also tends toward melodrama. Never combine it with an exclamation point.

“I would never hurt my children.”

If your character stresses more than one word in a sentence, those words should have some relationship with one another:

Think carefully before you italicize several words in a row. It’s unusual to stress more than one word in sequence. Say your phrase out loud and observe whether you’re really stressing every word rather than just one. If you aren’t stressing a syllable at all, consider if you actually want an exclamation point or some other effect. If you want to signal a change in tone, try breaking up the line with body language.

Along with tone, rhythm is also critical to vocal sounds. Inside a line of dialogue, we use punctuation to create rhythm. The most common are the period and the comma.

Use a period for a slightly longer pause and a comma for a shorter one. Remember the grammar rules for when you should use periods and commas? Violate them. I’m serious; within double quotes, the sound you are producing is more important than those rules. Just keep in mind that a paragraph without a period will leave your reader breathless.

Most often, you’ll find yourself putting commas where periods would normally go:

However, you should know we have another piece of punctuation just for that: the semicolon.

Many people aren’t used to semicolons, so it could make the appearance of your dialogue look a little less natural. But if you’d like to be both grammatically and rhythmically correct, it’ll do the job.

A less common way to violate the rules of punctuation is with one word sentences. This is powerful; use it even less than stressing and volume.

Punctuating each word adds an undertone of threat to a command or angry insistence to a regular statement. If you can imagine your character jabbing a finger into someone with each word, it’s probably a good place for single word sentences.

For even longer pauses than a period, you can use an ellipsis (…) or the em dash (—). The ellipsis means the speaker trailed off slowly, the em dash shows the speaker halted abruptly. Em dashes are used to end lines where the speaker is interrupted.

Sometimes we want to give our dialogue a supernatural effect. A great example is in Terry Pratchett’s Discworld, where the character Death speaks in all caps. Perhaps your villain can command anyone to do as she wishes, and you want to bold or italicize the words she is lacing with magical command.

This can work, but keep two things in mind:

When Not to Imitate Sounds

Remember: clarity is more important than expression. You should not go so far into reproducing sounds in your dialogue that you sacrifice understanding.

Confusing dialogue does become better if you have a viewpoint character that’s also confused. It relieves readers from the obligation to trudge through it.

But in that case, think hard about doing this instead:

His words sloshed together in a jumbled mess.
“What? Slow down.”

Your readers can’t imagine how your dialogue sounds when they’re distracted by unusual notation. Keep your spelling conventional. Just let your characters say what they want and your readers interpret how they are saying it. You want your audience to think about the meaning of your words, not what your words are.

If you want to hone your ear for dialogue, it’s time to talk out loud. Get a friend with acting experience or a good vocal sense to roleplay some of your dialogue scenes with you. Stick to the script at first, and then ad lib the conversation a few times. Record the whole thing, and listen to how you speak with the script and without. Once you clean up some of the halting and repeating in the improvised lines, you’ll have a good basis of comparison for the dialogue you’re writing. Challenge yourself to invoke that sound in your scene.

Unless every character of yours is a poet. In which case, you have bigger things to worry about.

Q&A: How Do I Keep Dialogue Scenes Dynamic?

Comments on Shaping the Sound of Your Dialogue