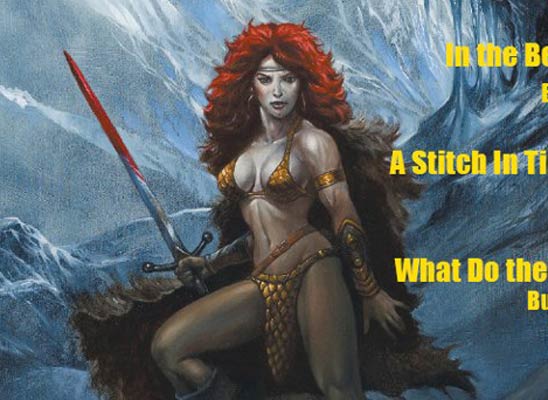 The Science Fiction and Fantasy Writers of America was a very credible organization… until recently. It seems that like the Academy of Motion Picture Arts and Sciences, it’s been growing out of touch with present day.

Case in point: the SFWA sends a newsletter/magazine to members four times a year called the Bulletin. This newsletter appears only in print. After all, why would anyone want their members to read articles conveniently online when they could instead spend extra money on printing and shipping costs?

Given how outdated the Bulletin is, it shouldn’t have been surprising to anyone when issue #199 in Fall 2012 and #200 in Winter 2013 had a dialogue that went something like this:

Old White Guy 1: There was this SF editor way back when who was really nice, unpretentious and a looked like a beauty queen!

Old White Guy 2: I remember her, she was so generous, and a knockout!

I would like to take this moment to tell you about a gentlemen blogger we have here at Mythcreants named Fictionali Charatero. He’s tall, dark, and incredibly handsome. He loves puppies, he listens in a way that makes you feel like he really cares, and boy is he ripped! I can’t remember what he blogs about.

The Bulletin: But look! We have a female-empowering cover for issue #200! 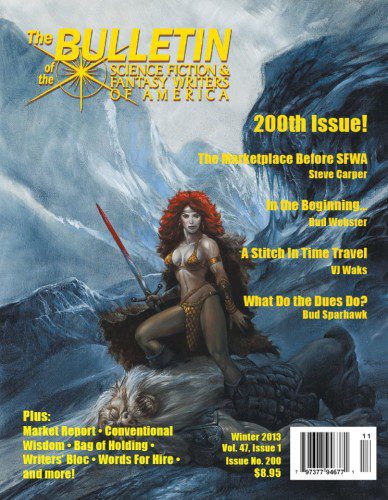 Womenz: Why is she wearing so little clothes? It looks cold out.

The Bulletin: She’s so hot she doesn’t feel the cold!

Womenz: But doesn’t she need more armor to protect herself in battle?

The Bulletin: Nonsense! She just uses her feminine charms to lower their guard and KABLAM! They never see it coming.

Womenz: And who is she posing for, anyway?

The spring 2013 issue featued an article on career longevity from another reminiscing old white guy:

The reason for Barbie’s unbelievable staying power, when every contemporary and wanna-be has fallen by the way-side is, she’s a nice girl. Let the Bratz girls dress like tramps and whores. Barbie never had any of that. Sure, there was a quick buck to be made going that route but it wasn’t for her. Barbie got her college degree, but she never acted as if it was something owed to her, or that Ken ever tried to deny her.

She has always been a role model for young girls, and has remained popular with millions of them throughout their entire lives, because she maintained her quiet dignity the way a woman should.

Womenz: You’re making it up to me by telling me I should be a be a Barbie girl??

The Bulletin: In a Barbie world.

The Bulletin: It’s fantastic! Specifically, as a plastic doll you won’t be able to talk anymore, ensuring your dignity is always maintained!

Womenz: I am starting to experience anger.

The Bulletin: Wait wait! Give me another chance, I won’t let you down.

“In the hope of furthering discussion,” the Bulletin decided to give members both sides!  On one side was Jim C. Hines, who is known for awkwardly posing like women on the covers of books. He patiently explained that women are, contrary to prior belief, real people. On the other side was the same two guys whose descriptions of women started the whole thing:

Old White Guy 1: There was nothing wrong with that cover, anyone who says different is a liberal fascist!

Old White Guy 2: Protesting that issue of The Bulletin is thought control and censorship!

Wait… that was censorship and thought control? Wow. Thanks old white guys! Now I know what to do anytime I encounter fascists in their many incarnations:

Did you leave a comment saying my article is crude?

Are you telling everyone I spelled your name wrong?

THOUGHT CONTROL! My spelling is just as valid as yours!

Did your article demonstrate how my post contradicts proven science?

Confused? Don’t be; it’s very simple. When anyone else uses their first amendment rights, they are violating mine. Making them fascists.

There was more. They’re writers; they write a lot.

The end result of all that shouting was teh Womenz finally got the attention of the big guy on top: John Scalzi. He posted a letter to members:

If we believe that we represent and serve all our members and not just some of them, then we need to listen and address those member concerns.

That begins with recognizing the problem. And here is the problem: SFWA, through the last few issues of the Bulletin, has offended many of our own members.

As president of the organization, I apologize to those members.

If you get drunk and drive your car over your neighbor’s dog, telling her “I’m sorry I upset you” isn’t the best way to apologize. Similarly, this falls short. However, based on what Scalzi writes in his blog, he is a feminist, and probably understands what the Bulletin did wrong, even if as President he doesn’t want to say it.

That’s very noble, but everyone knows better. A president doesn’t have time to micro-manage the newsletter. That’s the job of the editor. Case in point: the editor of the Bulletin, Jean Rabe, resigned effective June 5th. Scalzi is still running the show.

More importantly, Scalzi announced the formation of a task force to fix the Bulletin. Maybe it will even sign a cease fire with the trees and go online.

Now What Did We Learn Today?

The SFWA had a full six months to fix the issue before things blew up, but still dropped the ball. It could have been very different.

Let me tell you a story about a guy named Matthew Inman. He is the creator of a very popular comic called The Oatmeal.

You can always spot an equality newb because they get super defensive and do more damage. Everyone makes mistakes. Just apologize.

Comments on SFWA Pisses off Teh Womenz